While many films with similar gimmicks are in danger of falling apart after a short while, this film, fortunately, continues to deliver beyond the initial few minutes. It is incredibly hilarious, self-aware, and while the plot may not make very much sense, it sure as hell is entertaining to follow.

All the ridiculousness you could ever want is jam-packed in this absurd gem of a film. The protagonists are the embodiment of the white, middle-class, 50’s-era American “aw shucks” couple, composed of a scientist (which he reminds viewers of at least 50 times) and a housewife (which, to me, parodies that assumed naivety of the pre-feminism conception of the married woman). There is also a pair of alien visitors, an evil scientist, a bizarrely seductive half-animal/half-woman, “Ranger Brad” (my personal favorite character), a talking skeleton, and a “mutant” (i.e. a man dressed in a monster costume of high school theater quality).

So, basically, this film has everything.

Oh, by the way, this movie is also endlessly quotable, following the ironically beloved fashion of corny writing synonymous with classic B-movies. A few of my favorite lines include:

– “We take our horrible mutilations seriously up in these parts.”
– “I’m a scientist, I don’t believe in anything.”
– ” I’ve seen a bear do things that even a bear wouldn’t do.”
– “Putting the Amish in glass cases would be inhumane.”
– “If I had wanted a safe life, I wouldn’t have married a man who studies rocks.”

These aren’t even the bulk of the fun. I don’t know why this film seems to have gone criminally unseen, but that should change. It’s one of the best, silliest, wittiest parodies I’ve seen, one that classic sci-fi/horror lovers should get a fair kick out of. 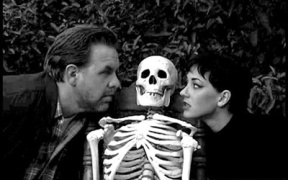 And if my above text still hasn’t convinced you, dear readers, perhaps the trailer will.