I felt that the protagonists of Chronicle weren’t exactly given the best, smartest introduction. Moreover, the problems each individual had seemed to serve as mere extensions of their character, which weren’t used effectively in the post-reception of their telekinetic powers. The lone exception here is the Andrew character, who eventually exploits his power toward destruction and devastation, mirroring his real life trauma.

The power of this film really comes in the final third. The juvenile wisecracks undertaken by the characters earlier in the film are fiercely contrasted by the dark dip in atmosphere that permeates the story at this point. It symbolizes a loss of innocence, though not exactly through a loss of ignorance. It is the choice to dispose of such a carefree nature in exchange for bigger – though not necessarily better – things. The gimmick of the shaky cam, while bothersome at many other points of the film, heightens the amount of realism near the end scenes, creating a more chilling effect.

I’m not entirely a fan of the narrative, particularly of the boring coming-of-age scenarios that feel tacked on and lazy. I do love the concept, however, and greatly admire the film’s ambition. Its philosophy is simplistic, but quite effective overall, and I cannot wait to check out more of the filmmakers’ future works. 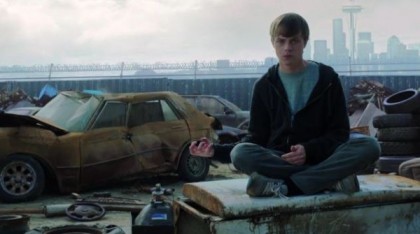 Like Loading...
This entry was posted in Reviews and tagged 2010's, Chronicle, Josh Trank, sci-fi. Bookmark the permalink.