My favorite image from Breakfast at Tiffany’s – ironically, one of my least favorite films of ’61

In this post, I will be continuing onward with my recollection of favorite films from the 1960s.  Here, I count down my top ten of 1961.

Quite honestly, I’m not a fan of this film. It’s bad enough that this film, as messy, boring, and unfunny as it is, is what usually-unfailing director Billy Wilder concocted after his heart-warming masterpiece The Apartment. I have a particular fondness for Cold War satire (Dr. Strangelove is one of my all-time favorite films), but this is one of the less interesting ones. Its one saving grace is the ever-charming James Cagney, who makes this film at least somewhat watchable, probably more than anyone else. Not even Wilder’s legendary writing chops could save this one.

Admittedly, it’s been quite a few years since I’ve last seen Disney’s 101 Dalmatians. However, it is a film that I loved as a kid, and there are still quite a few things about it that stick in my memory well into adulthood. For one thing, Cruella De Vil may be the most wicked villain that has every graced the screen of early Disney animation (there are many contenders, but ’tis just my opinion here). The lack of songs – and, furthermore, of cloying moral messages – benefits the film in strengthening its ability to actually tell a straight-forward, smoothly-progressing story. Plus, puppies!

In discussion over French New Wave guru Jean-Luc Godard’s great films, it’s nearly inevitable that his A Woman is a Woman comes up. My last post briefly mentioned my relative apathy toward the filmmaker, but it’s hard not to enjoy a flick like this one. The peppiness of mood and musical quality of its narrative – an aspect that is further developed in Pierrot Le Fou – results in a delightfully experimental, jumpy piece of work. Anna Karina is surely the driving force behind this one, portraying her character with an utmost charm and quirkiness, with a hint of sadness dwelling beneath her exterior. For me, the level of its idiosyncrasy soon wears thin, and this is far from my favorite film of Godard’s; still, its cute, cartoonish qualities are hard to resist, making it a prime factor of Nouvelle Vague.

So much about Resnais’ Last Year at Marienbad is grandiose, nightmarish, lovely – and, admittedly, quite incomprehensible. His focus here is intently on abstract symbolism and broken, repetitive dialogue, meant to invoke a thoroughly ambiguous atmosphere surrounding the story of an uncertain love affair. The film, intellectually, is a hard pill to swallow; instinctively, however, it’s not at all difficult to drink in its visceral beauty. His previous film Hiroshima, mon amour demonstrates that Resnais is no stranger to this gradual build-up of atmosphere, yet I feel he truly masters the technique here. Besides all of this, the cinematography presents a stark infatuation with frames. Subjects of shots often being placed within multiple framing devices, invoking a further sense of distance and looking absolutely beautiful in the meantime. This film is breathtaking.

I’ll be the first to admit that I can be a bit of a snob when it comes to believable depictions of events and humanly interactions in film. Nonetheless, I am willing to let my guard for realism down when it comes to musicals, and especially so with something as pleasant as West Side Story. It works well as a clever modern retelling of the timeless Romeo & Juliet narrative, while also presenting an additional angle on racial and class intolerance. Additionally, the music is remarkably catchy, namely Maria, I Feel Pretty, and (my personal favorite) America. Though it is quite slow by today’s standards (the romantic bits between Tony and Maria tend to drag a bit), the uber flamboyancy of its song and dance numbers make it so hard not to leave grinning form ear-to-ear. Indeed, this is one of the finest musicals of the 60s, and perhaps one of the most representative of the progressive decade.

There’s no denying that Kurosawa was, well, pretty good behind the camera. His flair for concocting long-winded samurai action-dramas, injected with a keen sense of humanity and moralistic qualities is unmatched, if anything. While Yojimbo barely misses the perfection present in his previous masterworks Seven Samurai and Rashomon, it is particularly notable for having what could probably be Toshio Mifune’s coolest role ever. His character practically oozes with a scheming snarkiness present in all the distinct protagonists we know and love. The film’s atmosphere has an uncanny aura of both Western influence and that of traditional Japanese culture, so the plot not only progresses smoothly but also remains entertaining throughout. Hell, even the cinematography is impressive. Also, without Yojimbo, we probably wouldn’t have Sergio Leone’s Dollars trilogy (namely The Good, The Bad, and The Ugly), which was heavily influenced by numerous qualities present in Yojimbo, and therefore, would probably not have the depth of the western genre as we know it. So there’s that.

If you can believe it, my #4 favorite film of 1961 is a weird little Yugoslavian animated short film. I’ve probably mentioned before that I love animated shorts, especially obscure ones from foreign countries. In face, I wrote an entire blog post professing my love for Russian animation. I had not realized, however, that a ripe culture of animation was breeding some distance to the west, and Surogat opened my eyes to this. Despite the fact that it won an Oscar for Best Animated Short, I never see much talk about it. The animation is far from the smooth quality of American cartoons; the lines and angles are jagged, and the colors are lush and vibrant, much like as if Cubist painting had come to life. With very little – if any – dialogue, the meat of the film comes from a number of sight gags; slapstick humor with a childlike quality, thus presented in quite a goofy manner. And frankly, I love it. Its gems like this that make me want to run around and introduce this wonderful, quirky brand of cartoons to fresh eyes, again and again. 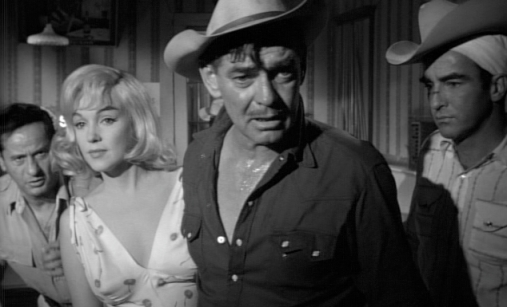 If anyone dare claim that Marilyn Monroe was all sex appeal and no talent, I immediately point them to the direction of The Misfits. Her portrayal as the vulnerable and broken Roslyn Tabor was unquestionably the greatest performance of her career; the fact that it had, unforeseeably, come near the end of her short life is a tragedy in itself. Besides her glimmering jewel of a performance, the other members of the promising troupe of stars proved to fulfill expectations. If this is not Clark Gable’s best performance, it certainly is his most grounded in reality – and hauntingly so. Montgomery Clift, Thelma Ritter, and Eli Wallach are tops as well, all of these aided by the exquisite, tragically-drawn screenplay by Arthur Miller. As far as John Huston’s directorial efforts are concerned, this ranks up there with The Maltese Falcon and The Treasure of the Sierra Madre as truly fantastic works of art. It observes the complexity of human relations and the dissolving of genuine morality as well as his best films have done in the past. Some films have all the right elements of passable filmmaking – good acting, cinematography, directing, etc. – yet may somehow not always “work”; The Misfits has all that and then some, and really is a special kind of film altogether.

If it isn’t apparent already, a lot of Bergman praising goes around in these parts. And really, how could you not? The man was obviously a genius at, not only affirming a combination of great acting with effective, mood-setting cinematography, but also injecting the surface of this with an insurmountable meditation on the deep, ugly parts of humanity, morality, and existentialism. The themes are major, but the presentation of them are minimal. Not a single element goes wasted; the most valuable of such arguably being Harriet Andersson’s role of a woman with a vast history of mental illness. Her frequent attempts to hear the voice of God are desperate, yet unheeded, bringing up questions of how feasible such religious belief could truly be. The quietness and desolation of the settings calls for an intense build-up of tension, which permeates through the film’s entirety. Such a tension is motivated by a shared quality each character shares: the critical need to be freed of whatever has been thrown at them. Whether it be narcissism, obsession, or sexuality, each have their own shackles to be released from, and when they are clashed together by some marvelous act of fate, the results are devastating. As in nearly all of his films, the way Bergman uses light and darkness here is also rather impressive – however, it truly must be seen to be believed.

Practically speaking, Buñuel’s Viridiana encapsulates everything I love about the art of cinema in one wonderful picture. It’s dark, morbid, funny, clever, and absolutely absurd. In other words, it’s a successful Buñuel film. It fiercely attacks the immorality and hypocrisy that surrounds the ideology of religion, particularly of the Catholic church. In order to do so, a bare bones narrative is given – following a young nun about to take her final vows – guided along by an ongoing series of explicit and implicit imagery that can often be as darkly humorous as it is clever and controversial. Anyone who is aware of Buñuel’s style of commentary should know that he is no stranger to strenuous attacks onto the corrupt ideology of popular society; this is probably presented most famously in his The Exterminating Angel. Here, of course, religion is the target, and his aim is just as merciless. In one scene, depicted in the above picture, a direct nod is given to da Vinci’s The Last Supper as it is re-enacted by a bunch of homeless men. His critique here is on things pre-assumed as “sacred”, “just”, and “honorable”, and how pious beings could pay such attention to trivialities while ignoring the tainted qualities of their dogma that are actually vital. Silvia Pinal truly shines in her role as the assumed “virgin” who enters deeper into awareness of the utter corruptness of her beliefs she once held true to her heart. This is definitely my favorite Buñuel film, and one that blew me away from my very first viewing. Not many religious satire could be as gracefully tantalizing as this film is, especially importance for the undoubtable awareness it brought into the minds of many at the time it was made. Buñuel is king.