While I generally had high expectations for Blue is the Warmest Color (as I usually do for Palme d’Or winners), I was nonetheless blown away by its sheer poetry. The topic of a relationship’s rise and fall is surely nothing fresh and original in the realm of cinema. However, I doubt many films have captured the very essence of such a relationship in such an intimate manner. At the very least, I personally haven’t seen another film that comes close to such discrete yet unflinching realism as this does. It is a work of art in every sense of the phrase; it is a 1000-page novel that, despite its density, is impossible to put down.

The film grants us permission into the life of Adéle, whom we first meet as a junior in high school. In this sense, the film begins almost like a coming-of-age story. We see her at school, reading along to a novel with her classmates. We see her interacting with her friends and getting involved in a short, unsatisfying relationship with a boy. With this short introduction, we get a general idea of the character of Adéle. She is timid, self-secluded, and not particularly high-maintenance. In essence, she comes off as the type of person who would ride along with the wave, choosing whatever comes in her grasp to define her. Basically, she’s an average teenager.

However, after a spontaneous delve into curiosity, Adéle finds herself within the wavelength of Emma, an slightly older female with short blue hair and artistic sensibilities. In terms of her personality, she stands at the near antithesis of our protagonist. She diligently chooses not to be defined by others, and carves her own unique path. As the two gradually begin to fall in love, Adéle comes into her own being, calculating her own desires and taking charge of her life. The wonderful thing about this film (one of them, at least) is that it takes viewers in and invites them to experience this vital chapter of the life of Adéle through her own eyes. The experience is often painfully intimate, but unforgettable in all circumstance. Despite its sprawling three-hour length, the narrative is amazingly well-paced; there is never a dull minute in its entirety, and I found myself thirsting for more as each moment passes.

Adèle Exarchopoulos – only 18 at the time of the film’s shooting – stands as the absolute best female performance I’ve seen all year long. She beats out both Cate Blanchett in Blue Jasmine and Julie Delpy in Before Midnight, two performances that I had held in high regard all year long (and still do). Exarchopoulos, however, comes upon us as something else entirely. While largely aided by the wonderful minimalist cinematography, her conveyance of even the slightest gazes and gestures feel entirely true-to-life. Every fragment of time that requires her to convey intense feeling, subtle or otherwise, is portrayed successfully and exceedingly so. On a personal level, I saw myself completely in her, more than I had in any other character on film. In her lowest moments I sympathized with her. And I did so while being reminded of memories similar to her situation at hand, eerily so even. I have been standing outside of a suppressive apartment door, sobbing and begging to be let back in. I have willingly shared a passionate kiss with someone, knowing that the fleeting moment will never amount to anything more no matter how hard I wish. It is in such instances that an actor deserves all the kind words they can garner, and I highly praise her for such talent.

What initially impressed me the most about this film is how it outlines the delicate intricacies of a romantic relationship in a manner that I could only describe as forensic. The chemistry between the two leads is absolutely amazing, and the film captures what feels like every possible feeling that could be felt in a passionate relationship. The camera gives us the view of an outsider witnessing their interactions, and despite the unflinching intimacy it often grants us, it never feels like we, the audience, are intruding. The closest that it comes to this point come at the graphic moments of the couple’s sexual encounters (which are, by far, the most-discussed scenes of this film). What amazed me the most about these parts – after the initial surprise over just how graphic they are – was how beautiful and natural they were shot. The sex is copious, but it never feels gratuitous or exploitative. Speaking frankly, I found them incredibly arousing; however, after a few minutes, it just felt completely intuitive, perhaps even inviting. But what mattered to me the most is the narrative that bookended these scenes. Knowing that there is a sexual history between Adéle and Emma (one that we had witnessed with our own eyes), the pained pressure that it shown around the tail end of their story feels all the more excruciating. Therefore, I found such scenes, if not essential, then extremely advantageous to the genuine presentation of the souls of our two leads.

It is tempting to state that this film captures the ebbs and flows of the universal trend of a first love. Although this is a story about two female characters, there is nothing about their situation and problems that arise that would inherently lump the film into the category of “queer cinema”, as it is not specifically catered to the queer mindset. However, I do believe that the fact that they are both female adds a special, unique dimension to the product. While the story of Adéle and Emma is not strictly a feminine one, the natural balance of the two roles create an inexplicable softness in the narrative that may have been absent if portraying a heterosexual relationship in a similar manner. The outbursts shared by the two in the more painful moments of the film are personalized in ways that many love stories could only hope to achieve. The falls in this particular narrative arc are saddled with intense, humanistic emotion that desperately marks its territory. In all, however, it is a film generally guided by emotions, particularly the special brand that makes a first love so ecstatic and memorable. As we ride along the wave of the life of Adéle, we are also guided by flecks of blue, which also add to its forensic quality and marks such moments as belonging to her and her alone. The ride is long and the current is strong, but oh what a ride it is. 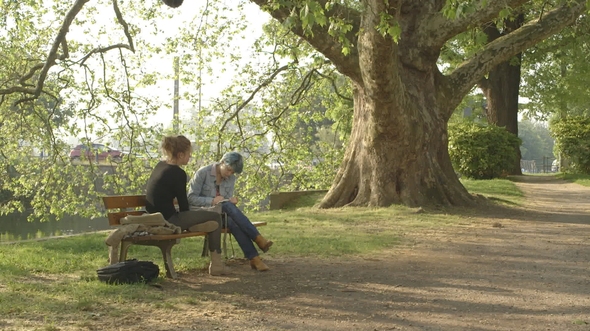 Like Loading...
This entry was posted in Reviews and tagged 2010's, Abdellatif Kechiche, Blue is the Warmest Color, French. Bookmark the permalink.