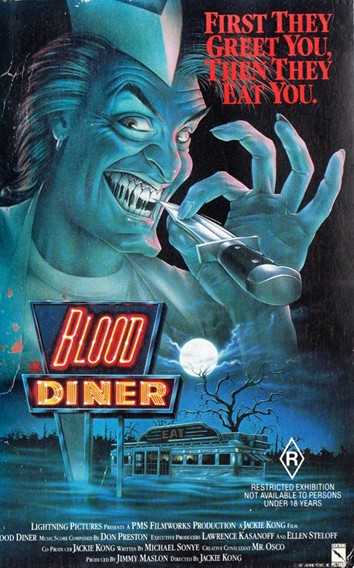 Blood Diner was recommended to me by a friend/coworker, who completely sold it to me by describing it as a “Blood Feast homage directed by a woman”. Of course, lady-directed movies are always particularly attractive to me; even more so when it’s a horror, which seems to be a particularly male-dominated field. Also, I watched Herschell Gordon Lewis’ classic Blood Feast last year for the very first time and enjoyed it quite a bit. Seeing a slightly more modern take on it sounded like an awesome idea, which persuaded me to check this out. Altogether, I’d say I liked it about as much as I did Blood Feast. There’s no denying that it’s quite a wild ride, often to its disadvantage, but its definitely the type of film I won’t be forgetting anytime soon. 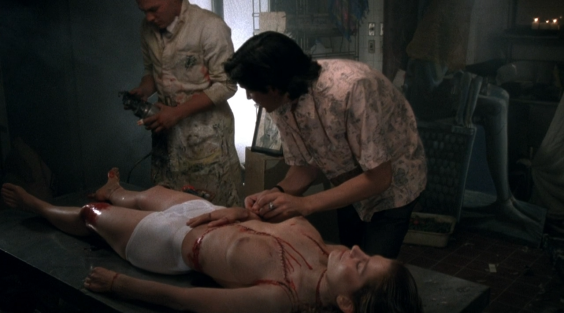 One thing that should be noted about this film is that it definitely doubles as a dark comedy, oftentimes with its humor dwelling in particularly bad taste. In such respects, the film frequently felt like something out of Troma, certainly not hurt by its frequency of gratuitous female nudity. Like Blood Feast, the narrative of the film revolves largely around cannibalism. However, while the original film plays these acts up to instill fear and discomfort in viewers, Blood Diner isn’t afraid to make light of these atrocities for the sake of humor. It also isn’t afraid to be more than a little bit ridiculous, as the narrative also throws in supernatural elements into the mix, creating a jarring effect with its horror and sci-fi elements. Essentially the entire plot is controlled by a talking brain in a jar… with eyeballs? And also there’s an Egyptian goddess and lots of wrestling and a band that is basically Nazi Devo? Go figure.

If these elements sound like something enjoyable, chances are they will be. Films such as these aren’t particularly hard sells for those who, like myself, relish in the occasional frolic through trash cinema. There’s no denying its sheer stupidity, but at the very least it is consistent in its ridiculousness. At least it is until its “Lumerian feast” climax, where all hell breaks loose, in every perceived meaning of the phrase. It’s also interesting to note its director, as there don’t seem to be very many female filmmakers within the realm of exploitation cinema (at least not very many praised ones). Yet Jackie Kong proves that, even among its employed tropes of violence against women and male-led gross-out humor, a compelling female character can be found with the black  lady detective (LaNette LaFrance) who proves she’s above and beyond the rest of them. Also, there’s no denying that the previously mentioned Egyptian goddess is pretty awesome – check out that toothed abdomen!

However, I couldn’t possibly kid myself in declaring Blood Diner flawless. After all, it is a rather tasteless horror comedy with a sense of humor that can be rather juvenile and frequently falls flat. Overall, however, the ride that it offers is definitely worthwhile, especially for those who appreciate Blood Feast, Troma films, extravagant blood ‘n’ guts – or all of the above. I’m glad this floated through my radar; despite the many drawbacks, its wild, bloody fun is impossible to deny.