Each time I watch The Blair Witch Project (I’ve seen it thrice already), I try to place myself in the mindset of when this film was publicized and released. The threat of Y2K was on the rise, the Internet was just starting to become a huge part of our lives, Americans were more obsessed with aliens than ever before. For months before the film’s release, producers of The Blair Witch Project also initiated what could possibly be the most successful viral marketing campaign of all time. The general public – at the time relatively naïve of the potential for the media to control our beliefs and urges – fell for the brilliant peddling of the movie’s fictional concept as a true story. Many viewers thought that the footage that made up The Blair Witch Project was actual found footage, recorded by three young campers who would go missing soon thereafter, never to be found again. This backstory alone should be enough to prove just how effective this film was at injecting itself into the psyche of the American public, a magnificent feat that any horror film should be proud to accomplish. 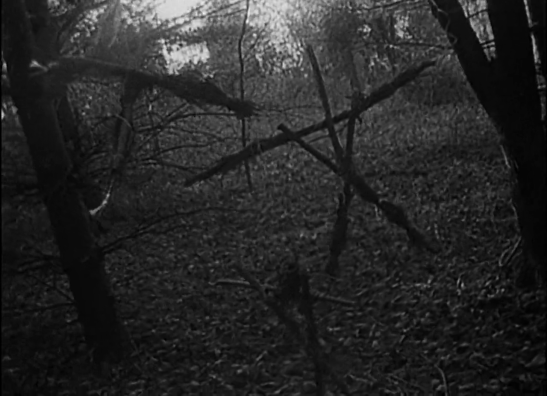 However, this review is not about this background context. It is about the film itself which I, for many reasons, consider to be one of the greatest horror movies ever made. While it is certainly not the first of the “found footage” subgenre (some sources link it to 1980’s Cannibal Holocaust; others earlier), it is a definite pioneer in the ushering-in of an innovative strategy in horror filmmaking – and filmmaking in general – that continues to permeate today. Everything about the movie’s mise-en-scene works directly to effectively achieve an uncanny sense of realism that, therefore, makes the narrative all the more frightening. From the minimalist sets and costumes, to the strictly fullscreen camcorder-like format, to the use of real human teeth and blood at a particular scene – one would be hard pressed to find many films that work so hard to give off the sense that they aren’t trying hard at all… and do so very successfully.

As a result, we are suckered into the world that directors Sánchez and Myrick have devised for us, this world not being unlike the sense of reality we experience everyday. A world where young twenty-somethings goof around in the woods and where these same individuals, when terrified, cry in very messy, undignified ways. The element of the supernatural is given to us from the very start of the film, with the legend of the Blair Witch being the mutual point of interest that drives our unfortunate protagonists. However, the directors make the perfect decision of making the source of their terror as cloudy and ambiguous as possible. The camcorder mode of recording intends on making the events of the narrative as unplanned and unstaged as possible; moreover, the audience is never given the satisfaction of actually seeing what frightens these three characters. The most we get is a few brief frames of action or extremely muffled background noises (though I could imagine these would be a bit clearer via a theater’s large speakers). Therefore, we are left just as much in the dark as the individuals we are following – and that may be the scariest part of all. After all, the most terrifying things are usually those that are intangible, those that cannot be seen.

Given my and other’s universal praise for The Blair Witch Project, its negative criticism absolutely dumbfounds me. It seems to be mostly people who vividly remember its hype back in ’99, and in many ways it’s for many of the reasons listed above. Heather Donahue herself even won the Razzie for Worst Actress, which really perplexes me since the acting in this film is some of the best that I’ve seen in any horror, especially found footage horror. The actors themselves were hired specifically for their ability to improvise and they all did wonderfully. The ambiguity and purposeful messiness of this film, to me, helped bring to light the inner fears and anxieties that we all carry, though don’t always think about. What makes this film so great is its ability to bring them all to the forefront, illuminating our repressed fears of the supernatural that we all think we are powerful enough to overcome – until we are forced to. What then? It is such strong feelings for this film that I am proud to share with the many who feel similarly. In such a way, the legacy of The Blair Witch Project has become an urban legend in itself, one which I sincerely hope future horror devotees could appreciate with open arms.