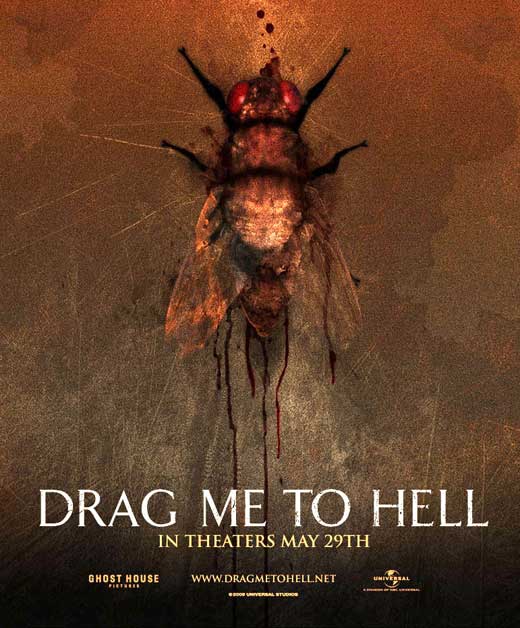 God bless Sam Raimi and that utterly unhinged star in the sky from whence he came. I’m certainly no stranger to Raimi’s flavor of horror; I consider the original The Evil Dead to be one of the finest horrors ever and I’ve watched it countless times. After some foray into mainstream blockbuster – by way of his Spider-Man films – it’s nice to see him dip his toes into genuine horror once again. And boy, what a ride this is. I had no idea what to expect upon starting this film (despite what The Evil Dead has taught me about Raimi’s brand of humor), but I definitely believe that’s the best way one should enter this movie. There’s so much about it that’s so off-the-wall, I don’t even know where to begin.

Like many good films, Drag Me To Hell starts off pretty ordinarily, before growing increasingly perplexing from one scene to the next. The primary narrative of the movie details the life of our protagonist and her struggles to get noticed amongst her largely male-dominated workplace. These were the bits that really drew me in, as I expected this film to continue on with this thread of feminist critique it had initially projected so convincingly. However, most of the rest of the film isn’t quite so easily decipherable. With a chance encounter at her workplace, she finds herself wrapped up in a wild journey battling curses and literal demons. Since the only perspective we are given is hers, we are just as confused as she is with the numerous projections of her curse that happen in the real world.

Unlike Videodrome, however, there is no sense of a melding of reality and surreality – we are to take every element of the supernatural here, not as her own hallucination, but as a literal occurrence. This, tied in with the flick’s truly unnerving sense of humor, is where Drag Me To Hell tends to falter. In many ways, Raimi’s perverted sense of dark comedy is completely welcome into much at hand; this seems especially true for viewers who are relatively familiar with how the filmmaker’s mind tends to work. In other ways, however, it does have a tendency to fall flat. It’s not a scary film by any means due to its uncanny brimming-over with blatant campiness. This actually works in its favor at many crucial moments, but in others, the tone simply feels incredibly unbalanced and skews its chances for working as a compelling horror, comedy, or anything else.

Let’s not also forget the fact that the film is pretty disturbingly racist in its portrayal of the antagonistic elderly woman as the source of Christine’s conflicts. The way that this character is written – as well as the two mediums presented in the narrative, also people of color – is based off of lazy, stereotypical tropes that have been presented a million times and written off as “normal” to the Western imagination. It was really disturbing to see such ignorant laziness in the writing of this film – although the fact that it isn’t surprising only further exemplifies how much of a problem such stereotypes remain.

It’s certainly no mistake that Drag Me To Hell is not for everyone; in fact, I can totally understand why one would completely write this off as a genuinely horrendous film. At the same time, however, that’s what I think makes it so beautiful in my eyes. Objective flaws aside (though only momentarily), it’s just the kind of wacky cinema of which Raimi’s biggest fans know he is completely capable. The levels of camp in this flick are completely off-the-wall – and this in itself may be a litmus test for which kinds of viewers are most suitable for a movie like this. Personally, I’m partial to a bit of hamminess in my films, so in many ways, Drag Me To Hell gave me exactly what I needed. Once again, I’m in no rush to defend it if anyone takes issue with it in any way, given the kind of film as which it professes to be. Though, while precautions should certainly be made, there is a lot of good to find in this one. As always, Raimi prevails.