For years upon finally getting around to James Cameron’s horror/sci-fi classic Aliens, I had practically heard nothing but universal praise for it. I honestly have no excuse as to why I hadn’t gotten around to it before, but my also-very-recent first-time viewings of the first two Terminator films certainly helped to place this one in my priority list. Now, however, I’m left wondering if I actually watched the same film as some of these critics. I guess the fact that the first Alien is one of my very favorite horror films may have lead me down the dangerous path of high expectations, but I’d use that excuse decidedly lightly. As so many people declare this as on equal par with or better than the first of the franchise, I anticipated much more from this particular film than the exceedingly average trek it apparently is. 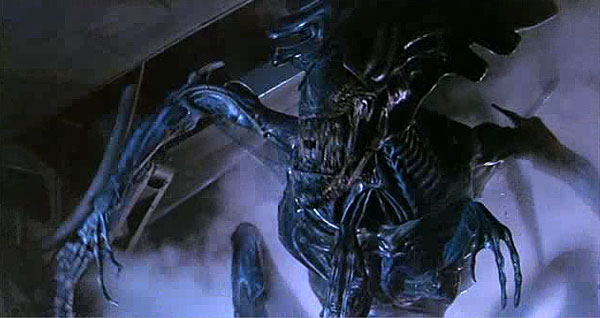 I suppose I’ll begin with the positives. One of the best aspects of Aliens – also like Cameron’s Terminator 2 – is the overall look and feel of the shots, mainly with respect to its cinematography and mise-en-scene. I’ve come to strongly associate Cameron with the certain type of lighting he seems to employ in a lot of his films. I’m not aware of the technical terms of this, but its probably most apparent in the neon blue bathing seen in Terminator 2 and, much later, the multi-colored glows in Titanic meant to invoke a certain mood, depending on the situation. I also noticed this in Aliens, this time with this lighting style implying a strong sense of dread and fear whenever the titular villains come into view. As with the first Alien, the H.R. Giger designs are on full display and the monsters are effectively terrifying. Their presence is all the more pronounced and its understood that much more is at stake in this narrative.

It wasn’t so much that I disliked the film than it was that I wished it were so much more fulfilling. One of my favorite spots of movie trivia is that Dan O’Bannon’s script for Alien focuses exclusively on plot and made every character initially unisex. This opened so much possibility for representation for, while the future is still definitely a man’s world, there still remains potential for well-rounded, well-written women to exist without the constraints of romance and/or motherhood. The characterization in Aliens, however, was a huge disappointment. Every single person seemed to fulfill the same fratboy Marine stereotype, and having to deal with such individuals for two-and-a-half hours makes for an exhausting watch. Thus, the writing is much more slanted toward the masculine, and I can’t help but feel this was influenced as a marketing decision, at least somewhat. 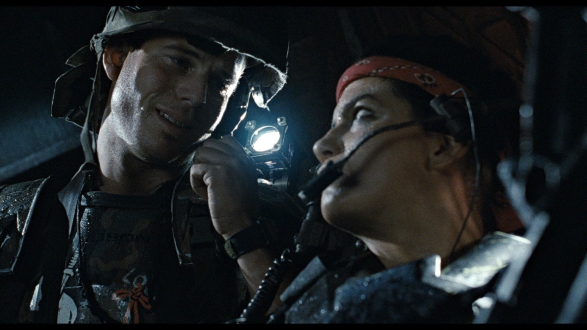 As always, the driving force of this whole ordeal is Sigourney Weaver, who completely plays the hell out of her role, a reprisal of her original Ellen Ripley. She always makes for a completely convincing female heroine; there were even sequences (especially in the climactic final third) that I found myself genuinely invested in. For the most part, however, this just felt like a sub-par sci-fi action movie that hit every beat a little too mechanically. It also doesn’t help that the aliens in this film were significantly easier to kill – which especially irritates me, given how their threatening presence in Alien supplied a large source of delicious tension. Perhaps it could be blamed on the nullifying powers of time itself, but I simply can’t agree with the majority opinion on this one. I prefer to just blame this one on bad writing. Cameron, you’ve done better.