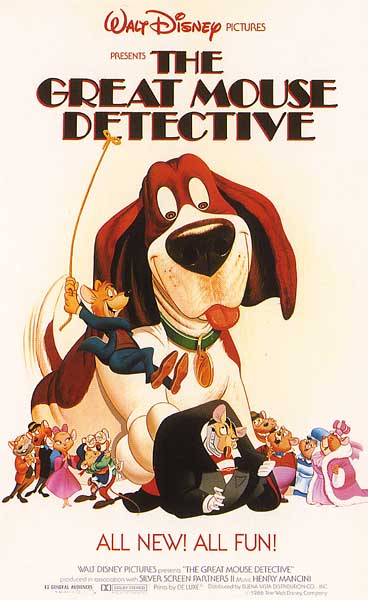 Long regarded as one of the unsung classics of the Disney animation canon, it seems that The Great Mouse Detective has finally found a good deal of praise from the modern day and age of film criticism. The relative ignorance toward this film may have something to do with its being conceived during a financial slump for Disney’s animation department, particularly after the box office failure of The Black Cauldron. However, there are many reasons for this film to be commended as well. For one, its success became the boost that Disney needed to embark on what would become the era of the Disney Renaissance. Also, it’s just a really fun movie in its own right, even though it has taken a second viewing for me to fully realize how charming it truly is. 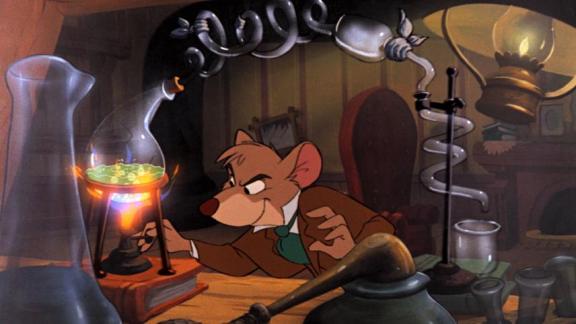 The plot of The Great Mouse Detective is basically written and progresses much like the classic narratives of Arthur Conan Doyle’s fictional tales of Sherlock Holmes. Likewise, Basil has got to be one of the best cinematic representations of the detective out there. His charm, wit, and cleverness make him a delight to watch, and I could imagine that I would have loved him even more as a kid. However, the real scene-stealer of this whole affair is the wicked and crafty Ratigan, brilliantly voiced by Vincent Price. I think at this point I’ve fully accepted that I love Price more as a voice actor over anything else. This infectious sense of cunning is also prevalent in his voice work for Richard Williams’ The Thief and the Cobbler, which he also perfected. While it’s no lie that I tend to favor the antagonists of these kinds of films, Ratigan has quickly made his way into my absolute favorite Disney villains.

One major quality that stood out to me with this rewatch was just how morbid many of these scenes are. Sure Disney is no stranger to dwelling in the darker side of things, but any movie that has the villain order a giant cat to eat a fellow peer alive is one sure to send a few chills down my spine. There’s even a sexy burlesque song and dance number thrown in there – not exactly morbid, but not quite typical kiddie fare either. Luckily, this film manages to balance the light and the dark with absolute warmth and precision. Speaking of musical numbers, I also found it slightly unusual how the movie was relatively lacking in songs, especially for a Disney film. Besides the aforementioned burlesque bit and Ratigan’s shining moment, there aren’t any other songs in the feature. As a result, the film is definitely more narrative-driven with minimal amount of interludes to drag the story along (a possible continuation from a trend started by the songless The Black Cauldron).

I also didn’t immediately notice how cool so much of this artwork and animation is. The backgrounds, while definitely lacking in the depth found in more high-budgeted animated flicks, are still rather lovely and do very well at contributing to the film’s overall look and feel. As far as the actual animation is concerned, this viewing helped me to rekindle my forgotten love for the climactic clock tower scene, which has some of the coolest, most gripping animation I’ve seen anywhere. It’s moments like these that made this movie so completely compelling, a jolly good time from beginning to end. It’s no lie that The Great Mouse Detective is one of the most underrated pictures of the Disney canon, but I’m sure glad that it has managed to find a loving audience nowadays. Heaven knows it deserves it.