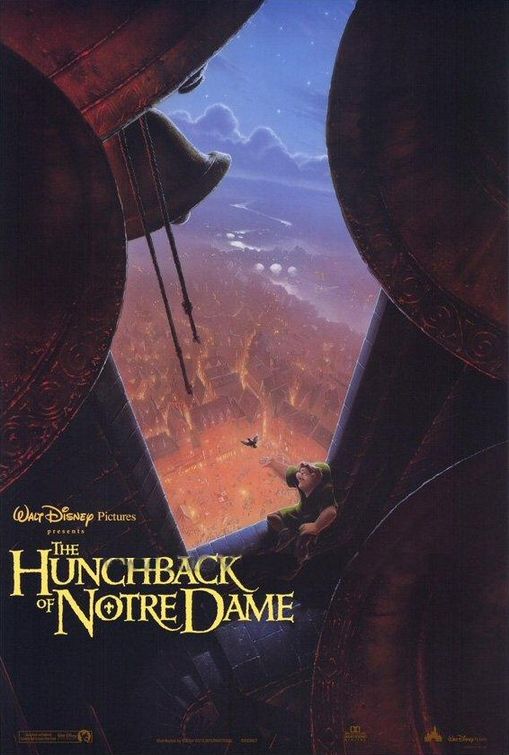 I’ve long held the opinion that The Hunchback of Notre Dame is not only one of the most underrated animated films from Disney’s Renaissance period, but one of the most under-praised from the studio overall. In its story, characters, artwork, and music, it dares to take approaches seldom attempted by other animated musicals. While Disney films of this era deal with their own share of dark, mature themes, they tend to be applied within much more bright and colorful elements that this work to make the movies appealing to children (and usually succeed). The Hunchback of Notre Dame, however, has relatively little amounts of such compromise – and with themes such as discrimination, authoritative abuse, lust, violence, racism, and religious corruption, among others, it’s definitely a wise choice to not attempt to lessen the blow.

Almost every angle and subplot of The Hunchback of Notre Dame is unflinchingly dark, which I suppose is why I’ve always found the innocent naïvety of Quasimodo to make him an absolutely compelling, sympathetic protagonist. Held back from the outside world due to his bodily deformities, he is written to be the bright star amongst the depravity and degeneracy of 16th century Paris. The voice work by Tom Hulce is absolutely beautiful, adding an extra level of childlike innocence to the character. While animated Disney musicals are known for their signature Broadway-esque numbers for the protagonist to pontificate on their hopes and desires, “Out There” – sung by Hulce himself – has got to be one of the most beautiful and least appreciated. It’s easily one of the best aspects about the film, and I often seek out the movie simply for that scene.

While Quasi is not difficult to get behind, the most compelling character in Hunchback by a landslide is Judge Frollo, the God-fearing, tyrannical figure who is extremely effective at striking fear in the hearts of viewers. Tony Jay voices him wonderfully, with a deep growl that seems to stem from a demon itself. Clopin, in the opening number “The Bells of Notre Dame”, sums up Frollo’s character perfectly as one who “longed to purge the world of vice and sin” and “saw corruption everywhere except within”. Once the narrative begins to focus on his overwhelming sexual lust for the beautiful Esmeralda – despite his prominent calculated racism – his character takes on absolutely disturbing dimensions attempted by few other Disney villains. How such a personification became green-lighted is beyond my understanding, but I’m so glad it did. 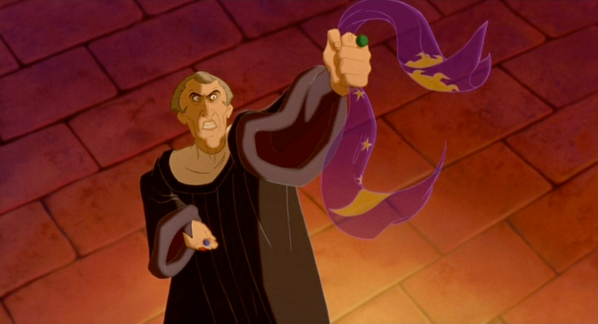 As I’ve implied throughout this review, the music in this film is fantastic. Sure there are a few songs in the final third especially that aren’t quite up to par; nonetheless, the strongest numbers could be neatly ranked among the best that Alan Menken’s ever done.  Besides “The Bells of Notre Dame” and “Out There”, “Topsy Turvy” and “Hellfire” are other highlights. The artwork and animation are also absolutely magnificent, from the breadth of the looming Gothic towers to the ominous reds and oranges that work as a motif up until the molten copper of the film’s climax. Demi Moore and Kevin Kline aren’t really the best choices for voicing Esmeralda and Phoebus, but the substantial writing and development of those characters really make up for it. Esmeralda especially is one of my very favorite Disney heroines; although I’m disappointed that much of her agency was zapped out in the latter parts of the flick, the way the narrative handles her and Quasi’s friendship was done with the utmost sensitivity, so I can’t be too mad about it.

I didn’t want to write about this aspect of the film, but it cannot be left unsaid: those gargoyles were the worst. Once again, I understand that Disney has to do its Disney thing and make the movie appealing to kids as well (in fact, they were probably the only reason I had a Hunchback lunchbox in kindergarten), but the effect they have on the movie as a whole is clumsy and jarring. I appreciated Esmeralda’s pet goat Djali as a more subtle, effective comic relief foil; these gargoyles, though well-intentioned, are just not funny. They serve as a slight misstep to an otherwise lovely, extravagant masterpiece of the Disney Renaissance. It’s certainly no exaggeration when I say that this is some of the finest work to come out of the studio. Although I’m not at all a detractor of all the other classic animated musicals that have been praised time and time again, I tend to shine a little extra light on The Hunchback of Notre Dame in hopes that some day, someone will see the substantial perfection that I see.