Something Wicked This Way Comes: Jennifer Kent’s The Babadook

Days after my initial viewing of The Babadook – what is almost certainly the best horror film to come out last year – its sounds, imagery, and themes continue to reel on and on in my brain. And how could it not? Besides its obviously rich atmosphere, drawing heavy influences from German Expressionism, it remains one of the most impeccably layered horror films I have seen in recent years. It also is one of the most compelling, subject-driven movies of 2014, within its genre or otherwise. Like a great deal of horror cinema, it follows a female protagonist whose life is jarred by the interruption of an enigmatic monstrous presence, all while she deals with some personal metaphorical “demons” of her own. The Babadook does an excellent job with pulling out some scares from its audience (I can definitely say I was fully terrified during its climactic final third), but what it does most effectively is tie these scares and disturbing instances into a larger cultural context. The Babadook itself – the malicious being that terrorizes the distraught Amelia and her young son for reasons never explicitly stated – stands as purely symbolic of the post-traumatic stress she’d had to deal following a violent accident that also took her husband’s life. The relationship between her, her son, and others around her becomes increasingly strained as that which she has been suppressing for years can no longer be pushed to the background.

Perhaps the most compelling of these relationships is that which Amelia has with her son Samuel. The narrative of The Babadook takes place shortly before his seventh birthday, which is also the seventh anniversary of the aforementioned car accident (since they were on the way to the hospital to deliver Samuel). We are thrown into what is acknowledged as a particularly unusual circumstance: Sam’s behavior has recently become increasingly erratic, shown in his particular fondness for weapons and imaginary monsters. The supervisors at school even discuss their concerns about him to his mother. Around this time, Amelia uncovers a mysterious storybook detailing the ominous, presumably fictional character of the Babdook. Samuel himself becomes preoccupied with capturing this monster through the motivation of protecting his mother. It is also around this time when he becomes fascinated with the household cellar, which holds many former belongings of his deceased father. It is important to note that Samuel is of the age when children begin to express fully fleshed-out personalities, thoughts, opinions, and a ripe sense of imagination. It would come as no surprise that he would bring up questions about the father whom he never met (a later confrontation with a peer who teases him for being fatherless brings back my own personal memories of alienation from being in seemingly the only single-mother household among my classmates).

However, this is where the first true conflict of The Babadook comes into play. Up until this point, Amelia had possessed the comfortable position of being able to push back her traumatic experience of loss. Up until now, her main concern was simply to raise her son in the most efficient means possible, whether it be from a career as a children’s book writer or from her current position at a nursing home. Once Samuel reaches to his own position as an avid seeker of information – as any child would – it becomes much harder to push back her past and this level of comfortability (and soon her own sense of reality) becomes askew. As the Babadook in the storybook declares, “The more you deny, the stronger I get“. Indeed, the metaphorical presence of her own years-old emotional wound (and its damaging effects upon herself and her own son) cannot simply be ignored. This book and its sudden appearance articulates a position as both artifact of the past and newly-realized trauma for both parties directly affected by it.

Throughout the film, Samuel acts out in his own ways, often treading upon violence and misbehavior atypical of most children. Here it is performed magnificently by Noah Wiseman, who perfectly formulates the behaviors of a young boy who seems to sense his mother’s despair, yet hasn’t the slightest idea on how to help her except through traditionally, masculinely heroic means. It could be argued, however, that Amelia herself hardly knows how to help herself through such means. As she had mentioned to others, she is unfazed by the anniversary of her husband’s death, opting instead to push it all away (as represented by the cellar under the stairs). However, after the introduction of the Babadook into her household – i.e. the storybook and Samuel’s unflinching belief of its existence – she becomes uncomfortably plagued by memories of the accident that had apparently been absent from the forefront for so long. Over-romanticized images in classic black-and-white movies bring to mind the perfect marriage that wasn’t to be. The line “I think it’s going to rain“ becomes a recurring motif, suggesting that this was a vital line uttered during the fatal night (after a traumatic experience, one can’t help but reminisce over ways in which it could have been prevented). In a more explicit example, Amelia comes across mysterious traces of glass in her oatmeal – that which is totally absent in Samuel’s.

The conflict of The Babadook is encapsulated in Amelia’s gradual descent into depressive illness. As more and more unexplained happenstances occur, she spirals into more and more implicitly destructive behavior, which over time takes some truly horrific turns. She loses sleep, alienates herself from those around her, and even lashes out against her own son (“Why don’t you go eat shit?!”). Despite these scenes being written as a conventional possession narrative found in many a horror film, the way they are shown is undoubtedly heartbreaking. Nonetheless, what The Babadook does brilliantly is avoid painting Amelia as the villain of her own story, but rather as a sympathetic individual tragically affected by circumstances beyond her control – in this case, depression and post-traumatic stress. Often times, people with such disorders are seen as being little more than deliberate nuisances to others, who would be so much better off if they could only just “get over” whatever they’re going through and behave emotionally like a “normal” person, like everyone else. Such views are especially prevalent in scenes where she interacts with other visibly healthier adults (e.g. the mothers at the birthday party, the condescending police officers).Yet as we see in her hallucinations, her frequent sleeplessness, and increasingly destructive conduct that this is surely much easier said than done. In some ways, these interactions even work as an overall backlash against single-mother households, with special attention paid to all the ways in which Amelia has failed at raising Samuel “correctly”. The most refreshing presence is Mrs. Roach, the neighbor, who personally comes to her door and assures her that she’s always there for a supportive shoulder to lean on. While her character is never developed as fully as it could have, it represents the positive figure that should be available for anyone with PTSD, one who may not completely comprehend all she is going through, yet accepts her for who she is and is willing to help in any way accessible. 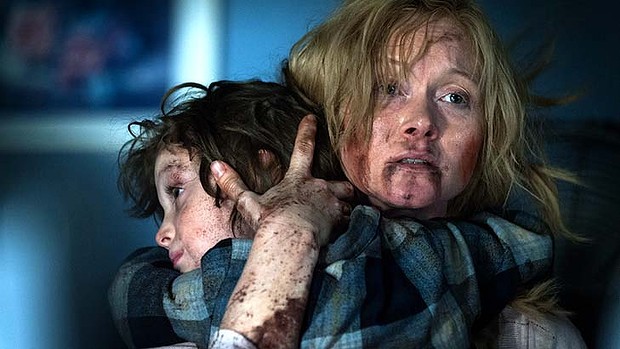 As the storybook version of the Babadook had iterated, it is only after acknowledging its existence will the figure finally subdue itself into simpler means of handling. Indeed, it is only after great struggle and perseverance until the ghostly figure releases its stranglehold on the life of Amelia. It is only after years of pushing back the trauma of her husband’s death until she can accept the repercussions of its existence and finally move on with what little bit of a “perfect” life she’s got. She’s made it thus far in dealing with her recurrent struggles –  why not fully accept the traumatic experience head-on, both for the sake of her child and her own stability? It is only after she has drawn this conclusion on her own does her life seem to dwell on some form of stability once again. The final gesture of Amelia’s tale is fully realized in her offering the Babadook the bowl of worms which Samuel has collected. While she and Samuel seem perfectly content with living their lives without a male figure acknowledged in the equation, this scene brings the narrative to a neat closure, in that Amelia is finally coming to terms with the incident which she has denied for far too long. While her trauma is undoubtedly part of what defines her, she recognizes that it is not the only thing that does; comfortably acknowledging the accident, therefore, provides her with the sense of self-empowerment that she certainly deserves.

In the final scene where she and Samuel spend his seventh birthday alone together, the message is clear: with the safety and stability of the ones you love and trust the most nearby, near anything could be accomplished. While the Babadook – and the trauma which it symbolizes – cannot completely disappear from view, it could certainly be quelled. For any and all suffering mental disorders, hope remains, not in numbers, but in strength and perseverance. It is with these reasons (among many others) that I believe The Babadook to be the greatest film of this past year. Above all, this makes me increasingly hopeful for the future of women in the horror genre – not concerning their position in front of the camera, but rather behind the camera. I can see Jennifer Kent becoming a true pioneer in this regard, as very few films exist quite like The Babadook and I’m certain that it’s female-penned-and-directed approach more than helps.

Like Loading...
This entry was posted in Blurbs, Reviews and tagged 2010's, Australian, horror, Jennifer Kent, The Babadook. Bookmark the permalink.

5 Responses to Something Wicked This Way Comes: Jennifer Kent’s The Babadook