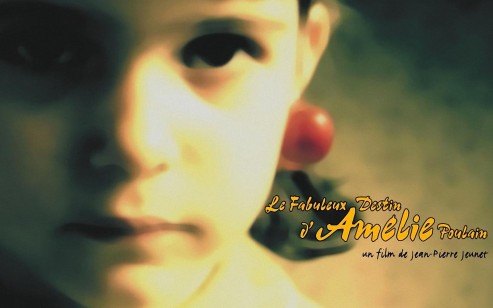 THE DESCRIPTIONS RECORDED BELOW CONTAIN SOME MILD SPOILERS. PLEASE MESSAGE ME PRIVATELY IF YOU WOULD LIKE SOME SPOILER-FREE GUIDANCE.

The introductory credit sequence – after an initial scene introduced by the narrator (Dussollier) – features a few moments presumably of Amélie’s childhood, where she is shown as a little girl eating raspberries and playing finger games, among other activities. This non-diegetic scene employs some quick movements and bright flashing lights; overall, it lasts about two minutes.

At the 8 minute mark, there is a scene where the young Amélie plots revenge on a neighbor by activating and deactivating his television set during an exciting soccer game. During this scene (which only lasts about 30 seconds), there are three instances of television static that all appear very briefly.

At the 23 minute mark, soon after Nino (Kassovitz) is introduced into the narrative, the narrator remarks on how they live “five miles apart”. Just a moment after this commentary, there is a very brief flashback, shown via splitscreen. In this, young Nino and young Amélie are shining morse code signals with flashlights outside their windows, as the narrator remarks on how they “both dreamed of having a brother or sister”. Visually, there are two sets of bright lights that are flashing directly toward the viewer. This flashback – similar to the others in the film – only lasts about 2-3 seconds.

Around the 1:04:00 mark (1 hr, 4 mins), Mr. Dufayel (Merlin) puts on the video tape that Amélie (Tatou) slips under his doormat. Following this is a closeup on his TV screen for about 30-45 seconds showing what she has recorded for him (a bicycle race also featuring a horse and a clip of guitarist Sister Rosetta Tharpe. Like the earlier scene with young Amélie and her neighbor’s TV set, there are a couple brief, sudden moments featuring static and white noise. This is also the case for another scene at the 1:31:15 mark, when Amélie sends Mr. Dufayel another videotape, this one featuring clips of babies learning to swim and Arthur “Peg Leg” Jackson. Finally, at the 1:51:45 mark, the tables are turned when Mr. Dufayel sends Amélie a videotape of his own, this one being one of himself stating: “So, my little Amélie, you don’t have bones of glass. You can take life’s knocks. If you let this chance pass, eventually, your heart will become as dry and brittle as my skeleton. So, go get him for Pete’s sake!”. There are a couple moments of closely-shot static that are, once again, very brief.

Around the 1:22:00 mark, Amélie attempts to ease the nerves of a long-grieving widow by creating an original letter under her deceased husband’s name. After reading and photocopying his old letters, there is a scene of her sitting at a desk, cutting apart the letters, and pasting them onto a new sheet. This scene is heavily-reliant on fast-forward visuals and quick movements to speed up her actions. While the movements are very rapid, they are recorded in one stagnant, medium close-up shot that only lasts about ten seconds.

At the 1:25:30 mark, Amélie stumbles across some posters that Nino has left in response to her cat-and-mouse games. There is this very brief moment of quick movement, where the camera zooms onto Amélie’s face, makes an 180° panning shot onto the posters (which read “Ou & quand?“), and swoops back onto her shocked expression. This part only lasts about a second or two.

The scene at 1:26:30 marks the moment where Amélie realizes who the bald man in the photobooth pictures is. The narrator remarks on Amélie reaching the photobooth at the same time as this man, noting that “the time is exactly 11:40”. As they meet, the man is shown through Amélie’s point of view, with a torn photographic image superimposed over his profile. This image is slightly flashy and a bit static-like. Then, Amélie is shown smiling as the screen quickly fades to white. This entire scene lasts about a minute. This motif is repeated similarly at the 1:43:00 mark, where this time it is Nino who meets the bald man. His expression is shown at a medium close-up, where the frame slowly rotates 360°; like Amélie’s scene, this one also fades to white, lingering momentarily on a vivid orange hue as it does so.

At the 1:29:15 mark, Lucien (Debbouze) replaces a lightbulb at Mr. Dufayel’s apartment. As he does so, the vivid glow of the lightbulb illuminates brightly at the bottom-left corner of the screen for about ten seconds.

Around the 1:35:00 mark, Amélie is shown waiting for Nino to arrive at the café. She imagines a fictional scenario in her head, which includes much rapid visuals, quick editing, and lots of fast-forward movement (all in black-and-white imagery). During this time, the narrator states the following: “Nino is late. Amelie can only see two explanations. One: he didn’t get the photo. Two: before he could assemble it, a gang of bank robbers took him hostage. The cops gave chase. They got away, but he caused a crash. When he came to, he’d lost his memory. An ex-con picked him up, mistook him for a fugitive, and shipped him to Istanbul. There he met some Afghan raiders who took him to steal some Russian warheads. But their truck hit a mine in Tajikistan. He survived, took to the hills, and became a mujahideen. Amelie refuses to get upset for a guy who’ll eat borscht all his life in a hat like a tea cozy”. This scene ends when Nino suddenly arrives at the café.

The 1:56:45 mark is where the final scene of the film occurs. Here, Amélie and Nino are shown riding through town on a bicycle. As music plays in the background, there are some rather fast-motioned shots with quick erratic movements between all elements involved. This scene lasts a little less than a minute and ends at the start of the movie’s end credits.

Consensus: Amélie is a very stylish film that employs a lot of quirky, vibrant images to upkeep its manner of presentation. This includes a bright color scheme, frequent scenes of fast-forward movement, quick camera pans and zooms, and visuals of static and bright lights, among other aspects. While the vast majority of these elements only last for a few seconds at most, being exposed to them frequently over the course of two hours could prove disorienting to some folks with epilepsy.

There are probably a few scenes and moments I am leaving out; if any more spring to mind, feel free to let me know.