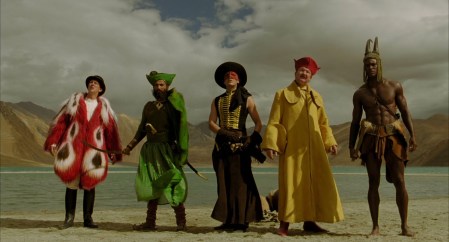 THE DESCRIPTIONS RECORDED BELOW CONTAIN SOME MILD SPOILERS. PLEASE MESSAGE ME PRIVATELY IF YOU WOULD LIKE SOME SPOILER-FREE GUIDANCE.

While this film is very imaginative in its concept and grandiose in its narrative scope, the way it is shot and presented is relatively straight-forward. It is lacking in many instances of quick editing or swift camera movements that would be noticeably troublesome for viewers. There are a few brief moments worth mentioning, however.

At the 7 minute mark, Alexandria (Untaru) is standing right outside of Roy’s (Pace) room; she turns and looks outside the door right as a horse passes by. For about 2-3 seconds, the bright light from the sun shines directly toward the viewer before it cuts away. This whole scene lasts about 15 seconds.

Right after the 20 minute mark, Roy (as narrator) introduces the character of Luigi (Smith), an Italian explosives expert. As he is roaming through the empty streets of his city, another shot of the sun shining directly at the camera is captured. This moment lasts for only about 3-4 seconds before it cuts away.

Around the 27 minute mark, the gang arrives upon the appearance of the Mystic (Bleach), who is shown breaking away from a solitary tree. After a few seconds of struggle, an explosion of bright, sudden fire appears, then quickly fades away. 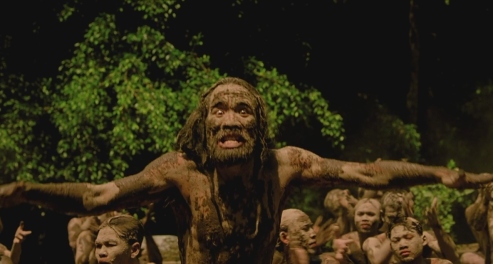 A slightly more attention-worthy scene begins around the 42 minute mark, which begins when the Mystic takes the map from Darwin, runs into the “greener pastures” and summons his people. Following this, there are a few moments where they perform a tribal ceremony of chants and drums, and the map is drawn onto the body of the unconscious Mystic. This scene is full of quick editing of a random, dispersed series of images. The intensity of this editing is mirrored by the crescendo of the music playing in the background. This entire scene lasts about a minute.

Around the 1:24:00 mark, Alexandria takes another trip to the hospital’s pharmacy to pick up another bottle of morphine tablets for Roy. While standing on a cabinet, she loses her footing and suffers a fall. Then, there are a series of images and scenes that are shown, including traumatic moments that are assumed to be occurring at Alexandria’s farm. There is some quick editing in these moments, as well as a couple instances of burning flames. Following these visions is a stop-motion animated sequence, which features some quick movements and fast-paced editing. This scene ends with Alexandria lying on a hospital bed, coming into consciousness as a doctor scolds Roy. These moments are shown via a swinging light bulb; images fade to and from black at a medium-level pace. This entire scene lasts about two minutes.

Around the 1:34:30 mark, Luigi is shown trying to divert the band of soldiers from the rest of the story’s heroes. He runs into an empty building, where they all follow; inside, he locks the doors and kills them (and himself) with use of explosives. There is a brief moment of bright flames as the entire building is engulfed in fire, but this occurs very briefly.

In one of the final scenes of the narrative, many patients of the hospital are shown gathered around and watching a projection of the film that Roy was involved in. A few seconds of this film at a time are shown; in silent era fashion, there is a slight flicker that is presented with the film, as well as some quick editing. This whole scene lasts about a minute and a half. Following this is the very last scene of the movie, which presents a series of assorted action scenes from classic silent films. Many of these have some rather quick movements, erratic editing, and black scratches and cigarette burns that move quickly across each frame. This scene ends once the end credits begin to roll, lasting about a minute in length.

Consensus: Except for a couple of longer scenes that present some relatively unusual editing choices, this film could be interpreted as being troublesome simply on a moment-by-moment basis. Many of the scenes – inside and outside the real world – are saturated in a bright yellow color palette that could be problematic for viewers with color sensitivity; otherwise, the moments listed above are the main scenes to look out for.

2 Responses to CWE Entry: The Fall