My viewing consistency for April was slightly thwarted by the fact that I went on vacation for about a week near the start of the month. As soon as I came back home, however, I continued on with my trek through a variety of films, books, and music. Although I didn’t get nearly as much writing done on movies as I did last month, I’m still being somewhat consistent. Also, I’ve gotten back on the wagon with my Billboard challenge! Hopefully I’ll have my post for 1974 published really, really soon.

Out of the films I watched in April, only a few were made before the 80s, but they offered such a welcoming amount of diversity to my viewing habits and I’m willing to make this more of a regular thing. I’ve also gotten back on track with watching more films directed by women, a feat that I really, really hope to improve upon through the rest of the month.

Now I’ll get on with my viewing patterns. Here is the full list of what I watched in April. As always, asterisks indicate rewatches. For films that I’ve written about on Letterboxd, I included links to their corresponding reviews.

In April, six of the films I watched were directed or co-directed by women (I’m including Grey Gardens into this number – even though its generally credited toward the Maysles brothers, I think Ellen Hovde and Muffie Meyer should receive equal credit). The first of these was also the film I watched to kick off the month – that being Eileen May’s Ishtar. Many consider it among the worst films ever made and while, yes, it is extremely awkward in seemingly every way possible, it’s no worse than the multitude of other nonsensical comedies from the 80s. At the very least, its failure should have never been at the expense of May’s career; if anything, it’s made me more interested in checking out her earlier output.

Gray Gardens was the second film I watched this past month, and I’d safely rank it among the greatest documentaries I’ve ever seen. The Beales are such fascinating subjects, what with their plummet from riches and prosperity to isolation and poverty. It’s mainly just a collection of their own memories mingling among the upper class, but boy are these stories all the more interesting within the current context of their squalor. I can see how Grey Gardens inspired Johnathan Caouette’s riveting, personal documentary Tarnation, and while both of these are cursed to dwell in the issue of potential exploitation of its subjects (the Beales in the former; Caouette’s mentally ill mother in the latter), I think the tone of Grey Gardens especially is one of sympathy and sensibility toward these women, dealing with cyclonic factors beyond their control in the only way they see fit. 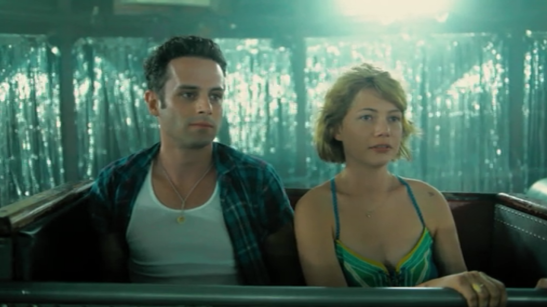 Later in the month, I checked out a double viewing of films by two female directors still active in the industry. The first I watched was Take This Waltz from Sarah Polley, the third and final of her feature-lengths I still needed to watch. I do think it is her weakest and I have quite a few issues with it, namely with its stilted dialogue, awkward pacing, and weak characters. Nonetheless, I still enjoyed it, if only for the terrific performance from Michelle Williams, who has yet to let me down and may be my favorite working actress today. While the scenes opposite her and Luke Kirby were a bit of a bore, the chemistry found in those with Seth Rogan is fantastic, offering a genuine portrayal of a couple who’ve been together for five years. Once again, this is Polley’s least interesting film, but I’d be willing to give it a second go-through some time in the future.

The second of this double-feature was The Holiday from Nancy Meyers. The bulk of her output is in the form of romantic comedies, and while I am a fan of the genre, I’m generally mixed with my opinion of her work. The Holiday, however, may very well be my favorite of her films thus far. Sure, it’s utterly predictable and falls into many of the same formulaic traps to which those of its genre are prone. But I’ll be damned if it isn’t the charming, heartwarming holiday film I was hoping it would be. While it may be awkwardly written at times and the romantic pairing of Kate Winslet and Jack Black is questionable, it wears its heart firmly on its sleeve and is all the better for it. If anything, Eli Wallach’s utterly compelling storyline may have been the one aspect to save this one from being totally forgettable.

I also rewatched Nora Ephron’s always adorable You’ve Got Mail, which only seems to get more and more fascinating as the years go by, due to how dated it gets so, so quickly. It’s very ridiculous and I still think Tom Hanks is a big asshole in this film – yet I can’t stop revisiting it time and time again. It’s probably the sentimental bug in me who admires a simpler time when a bookstore could be in a competition for space, not with a shopping center or a tech company, but another bookstore. It’s not a good Lubitsch interpretation, but it sure is sweet by its own regard.

Finally, I watched Clio Barnard’s breakthrough narrative feature, The Selfish Giant. Kitchen sink dramas aren’t always my thing, but they’re almost always impressive from a technical standpoint (hence my love for Ratcatcher). The Selfish Giant is certainly well-made but also very, very grim, as stories about children in deep peril tend to be. I’m also a huge fan of sentimental male bonding in film, which is brilliantly captured with the two young leads in this film, playing two brothers just trying to eke out a way of survival. This one comes highly recommended – although it’ll take a lot of courage to try to withstand this one again.

Regrettably, I’ve been falling behind on my goal to go to a movie theater at least once per weekend. I’m not stressing too much about it, though, as I usually get most new viewings of that year done in December anyway. I did, however, watch my current favorite film of this year this month, that film being 10 Cloverfield Lane. I did enjoy the first Cloverfield film – hence why I was surprised that this film did a complete turnaround stylistically, since that’s normally not the trajectory that horror sequels tend to take. This change, I soon found out, was certainly for the better; it trades elements of its found-footage origins (both good and bad) for a more minimalist chamber horror, using its singular location to sculpt rich characters and effective dramatic flair. It’s even quite funny sometimes, a quality I’m always happy to see in these sorts of films. Mary Elizabeth Winstead is an excellent protagonist with a great narrative, while John Goodman shines in quite possibly the best performance I’ve seen from him. I also just love how abruptly it switches genres during the final third – I’ll refrain from spoilers here. But basically, it’s a real wild ride of a film that I’m more than willing to take again and again. 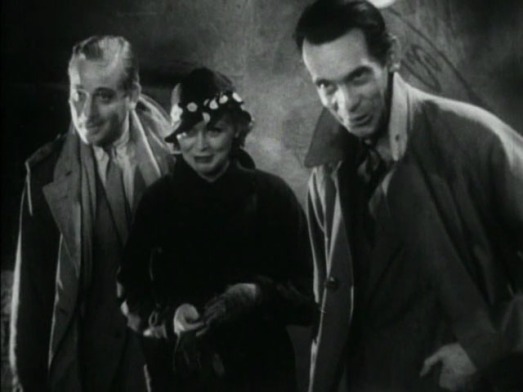 After literal years of putting it off, I finally watched the James Whale masterpiece The Old Dark House (the oldest film I’ve viewed this past month). As expected, I really enjoyed it, with its darkly comical atmosphere and some truly weird characters. It being a Pre-Code, I fully expected its stilted pace and especially its risqué and morbid content. It was especially strange seeing Boris Karloff in a headlining role, yet remaining silent throughout its entirety – though this is recompensed by the likes of Ernest Thesiger and Eva Moore totally camping it up. I still prefer The Bride of Frankenstein as the Whale masterpiece, though The Old Dark House is bound to be a new low-key favorite of mine, given some time. The film also really makes me miss my Pre-Code obsession from years back, something that I should really consider bringing back again.

In case you, the reader, haven’t noticed, I linked short reviews to the first five shorts developed by what would eventually become Pixar Studios. I plan to continue on with this past throughout this coming month, starting with Geri’s Game from 1998. To give the gist of my opinions: while these films are undoubtedly weaker compared to the feature-length output that would eventually rise from the studio, the animation alone was miles ahead of what everyone else was doing at the time. It’s nothing short of impressive that these little stories could be made from a computer, setting the stage for masterpieces to come in the following decades.

Rainer Werner Fassbinder is one of those exquisite artsy filmmakers I most want to fully indulge in. As it stands, The Bitter Tears of Petra von Kant is one of the best films I’ve come across recently. It’s easy to reel me in with impressive visuals in the form of clothing and sets, and that’s exactly what this film does. Practically every frame utilizes bodies, objects, and sheer imagery in ways I really only see in extravagant paintings and such. It’s also one of the most tragic films I’ve seen recently, its title character being captured in her most vulnerable state, dwelling gradually into a more and more pathetic state that, nonetheless, feels (painfully) human and familiar. It’s brimming with melodrama that is enamored with the heightened emotional state of the women that occupy each frame, set apart from patriarchal love that, while may drive its characters, certainly doesn’t define them. Simply put, it’s a beautiful work of art, and I can’t wait to dive into more work from Fassbinder.

In April I finally watched Noah Baumbach’s Greenberg, and while I can’t say that I hated it, it’s become my least favorite Baumbach film thus far. I’ll admit that Ben Stiller is pretty great in this as is Greta Gerwig, which is less of a surprise since she’s great in everything. Yet while I have come to embrace the generally cynical nature of Baumbach’s work, this one seems to lack the uplifting, positive touches that balance out his best films and make them so great. While the pessimistic nature of the film really shines in a few great key scenes and while it’s even pretty funny at a few points, I was just dreading the viewing experience for the most part and anticipating it ending – certainly not a good sign. I can’t recommend this one. 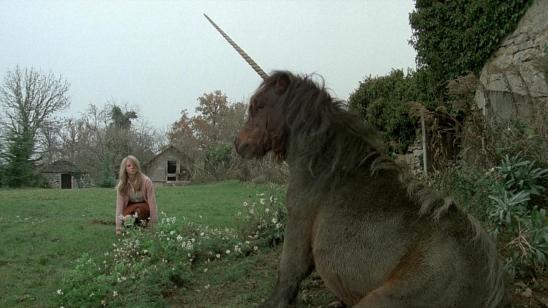 Louis Malle has the weirdest directorial output I’ve encountered from anyone thus far. What other individual could declare creative ownership to films as diverse as My Dinner With Andre, Elevator to the Gallows, and Zazie dans le métro (actually, Norman McLaren is probably the most eclectic, but I’ll digress). Predictably, Black Moon only further asserts this stance. The viewing experience for me – and presumably most people – was utterly perplexing; it’s the kind of film I need to read about in other to fully digest its content and symbolism. What I can say, however, is that it’s overflowing with some simply cool natural, avant garde imagery, shot by Sven Nykvist, one of the greats. As I mentioned before, great cinematography is a quick way to my heart and this film certainly accomplishes this. At the same time, however, I won’t pretend I know what this film is about; I’ll leave this to more astute analysts.