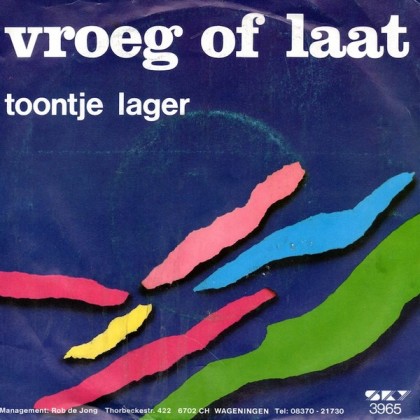 I always figured when doing this Random Single a Day challenge that the ones with lyrics I don’t fully understand would be the hardest to review. And such is the case with today’s song, which is completely in Dutch, a language that I’ve always wanted to learn but am nonetheless pretty much completely unfamiliar with. Although “Un éléphant sur mon balcon” wasn’t in English, at least I know enough about the French language to surmise enough about the mood and story to make it worthwhile. All I really know about Dutch is that it’s the language that vaguely sounds like German, of which I took three years of courses, so I guess that helps somewhat.

It was really hard to find very much information about Toontje Lager that wasn’t in Dutch, but from what I can gather, they were actually kind of popular in the Netherlands for a few years in the 80s. Their best-performing single on the charts was “Stiekem gedanst” from the previous year, and I’m not gonna lie – it’s pretty fun (even if the lyrics do essentially translate to “I danced with you in my mind while staring at you from across the bar; I hope you find that charming”). It seems that their most popular stuff falls into more of the upbeat, slightly ska-influenced stuff that one can find from the likes of The Police around this time. I researched a bit further and found that they fit clearly within the genre of Nederpop, which is exactly what it sounds like, only with a clearly defined trait of reggae/ska influences. This is especially true of their second-best-performing single “Ben jij ook zo bang”, which also comes with a nice little falsetto part near the end. If you know anything about me, you know I’m a sucker for male musicians singing in falsetto!

But I guess none of this matters, because “Vroeg of laat” sounds very little like these two singles. Rather than stick with their upbeat power-pop style, this one opts for a more lower-tempo, synth-driven number. It basically sounds like if Flock of Seagulls decided to go the slow, moody synth ballad route. I put the lyrics through a translator and the mood is certainly fitting of its content, as it is a song about heartbreak, or rather the unshakable feeling of a relationship about to fall apart. Although the buffer of the foreign language keeps me from feeling the emotions to its full potential (while also not knowing if these lyrics are actually very well-written at all), the band’s performance is convincing enough to let their emotions transcend any language barrier. I just love around the middle of the song when the drum machine fades away unpredictably and is quickly replaced by real drums. It is from there that the song’s melancholy energy is truly felt, even if the rest of the track kind of just plateaus from there.

I don’t really have much to complain about with this track. From the translation, the lyrics seem to rely on a lot of cliché phrases and imagery, but I’m not really capable of making that judgment. If anything, the spacey synths and pervading vibe of loneliness would make this excellent background music for walking alone late at night. Although I wouldn’t go adding this onto my “80s Sad Songs” playlist anytime soon.

Like Loading...
This entry was posted in Uncategorized and tagged 1980's, 1983, Dutch, One Random Single a Day, Toontje Lager. Bookmark the permalink.