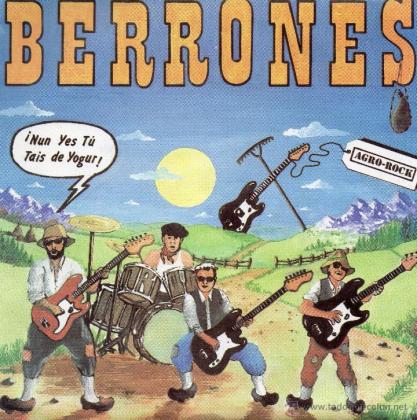 Today’s random single is a gentle reminder that one should never take music at face value, especially pop music, which often carries a more sinister agenda than its catchy beat and pleasing production may let on initially. But let’s take a step back. Los Berrones are a rock band from Asturias, Spain who found the peak of their fame in the 90s, with “Nun yes tú” being their most successful single. As shown by this song and a few of their others like “Chacho” and “La de la esquela”, their style is that of a pop-rock sound, with syncopated guitars like those found in rock en español and certain aspects in production that mimic American rock bands like Pixies and R.E.M.

This song is quite a catchy one and its melody is immediately infectious. I could immediately envision a packed concert of theirs with the entire crowd singing “Nun yes tú! Nun yes, nun yes tú!” along with the singer. The guitars are bright and happy, the drumming is upbeat and fun, and the whole thing sounds ever-so-slightly ska in nature. The singing in this one isn’t too bad either. I’m not going to lie, from the very first listen of this song, I really loved it. I assumed it was some kind of love song, or at least dealt with a topic of a somewhat light-hearted nature, and I was quickly singing, “Nun yes tú” before even knowing what it really meant.

The band sings all their songs in Asturian, a native language, so even though my knowledge of the Spanish language helped me to roughly translate something like “Mi viejo”, this language is much too separated from Spanish for me to even attempt to pick it apart by ear. I couldn’t find any direct English translations of the song, nor could Google Translate pick up on any of the Asturian lyrics, so I decided to work with a Spanish translation of the song instead. To make a long story short, this song is transphobic and unabashedly so. The speaker is talking directly to a trans woman and comments mockingly on her choices to wear dresses, heels and makeup and undergo cosmetic surgery, as if that’s any of his business. The chorus – the anthemic one that entire arenas sing along to – translates roughly to “That’s not you / What are you going to do? / You presumed to be a good man / And now you are a woman”. He looks upon her so shamefully throughout the entire song, putting her out on display like some kind of abject creature.

I have no idea if this was inspired by someone the band knew in real life; it’s unforgivable either way, but even if it weren’t, it’s still harmful and disgusting. There’s even a line near the end where he essentially threatens violence against her (“Si t’acolumbren de cerca / Van date con un rachón”, translating loosely to “If they see you coming closely / They will beat you with a stick”). 2016 was the deadliest year on record for transgender people (almost all that were murdered were trans women; the vast majority were women of color), and I can’t imagine that it’s any better elsewhere, especially in the 90s where positive representations of trans women weren’t nearly as visible as they are today. This song is just hateful and ugly, and the worst part is that it’s wrapped up in a tight, infectious little melody that is so deceptive in its charm and prettiness. This is why it is so important to pay attention to lyrics in pop music and stand up against those songs that promote bigotry and hate. Los Berrones are one of the best-selling Asturian rock groups in history and they accomplished this by means of a pitiful, transmisogynistic piece of garbage.

Like Loading...
This entry was posted in Uncategorized and tagged 1989, 1990's, Los Berrones, One Random Single a Day, Spanish. Bookmark the permalink.