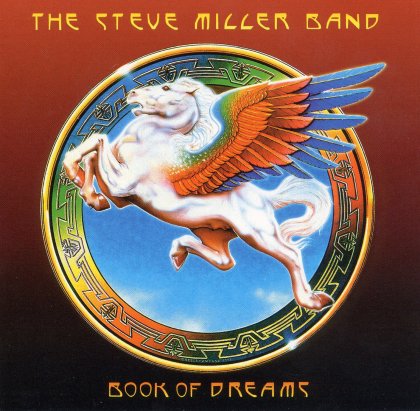 Ugh. Of course on the day that I decide to go back to writing about whatever the randomizer gives me (instead of solely devoting myself to women musicians), I land on the fucking Steve Miller Band. I’ve already written about a handful of the group’s songs in a few of my posts for the Billboard Hot 100 challenge (specifically, “The Joker” in 1974, “Take the Money and Run” in 1976, and “Jet Airliner” and “Fly Like an Eagle” in 1977). Needless to say, I’m not very big fans of the group – but I will write this review nonetheless. Steve Miller Band was formed in the mid-60s in San Francisco and is spearheaded by the creative leader of the band, guitarist and vocalist Steve Miller, who also writes and produces most of their material. The band released a few albums soon after forming, but didn’t find much commercial success until the release of their 1973 single “The Joker”. Although their success only gave them a scattering of top 40 singles, their sphere of influence has nonetheless made them one of the signature rock bands of the 70s. Their success certainly didn’t end in the 70s, though, as they accomplished their most commercially successful single to date with “Abracadabra” in 1982 – and boy am I going to have a field day writing about that one for my next Billboard post.

“Jungle Love” is a relatively minor single that came from their tenth(!) studio album Book of Dreams. It comes off the heels of “Jet Airliner”, the lead and certainly most successful single off the same album. While “Jet Airliner” shot all the way to #8, “Jungle Love” didn’t even crack the top 20. For the most part, I feel like all of Steve Miller’s singles sound ridiculously similar. It’s a copy-paste format that they manipulate to fit with the specific melody and lyrical themes, which are often pretty boring anyway. The one ear-catching detail of this song, however, comes with the introduction, a cool electronic whistle that sounds slightly similar to the intro to No Doubt’s 2001 hit “Hey Baby”. I’m not a huge fan of the latter song, but it is quite a notable relic from my childhood that is forever ingrained in my nostalgic brain. Admittedly, though, after this brief intro in “Jungle Love”, nothing else is nearly as remarkable.

After reading the song title and having previously been mildly familiar with the chorus, I suspected the worst. The title brings to mind the phrase “jungle fever”, and boy would I really, really hate this song if this song was legitimately Steve Miller’s ode to being sexually attracted to Black women. Fortunately, there’s not much that really points to this – no, it’s much weirder. Essentially, the speaker falls in love with a woman on an island after he gives her a “crate of papaya”. Later on, he writes her a poem. That’s really all that I can discern with confidence – unless someone else can translate such cryptic lines like, “The question to everyone’s answer / Is usually asked from within / But the patterns of the rain and the truth they contain / Have written my life on your skin”. It feels so much like high school poetry trying to sound deep by throwing together a bunch of abstract words and phrases that don’t really amount to anything. I get that it’s a love song, but I can’t imagine anyone feeling particularly moves by having a song such as this one dedicated to them.

Just like every other big Steve Miller Band song, the instrumentation is probably the most interesting, albeit for purely superficial reasons. The guitar riff sounds like it could have been recycled from another of the band’s songs, but it’s unique enough to stand its own ground and is really one of the only aspects of the song that make it listenable. Not that the song itself is all that listenable; it’s idiosyncratic, for sure, but never in a way that gives it much of a point outside of  its weird island love story. It’s pretty clear how this one is often perceived as a lesser SMB single – it tends to go through one ear and out the other with no real effect, positive or negative. At this point I would usually say that you should listen to a better Steve Miller Band song, but there’s really no good reason why you should be listening to Steve Miller Band at all, so I won’t. Good day.

Like Loading...
This entry was posted in Uncategorized and tagged 1970's, 1977, One Random Single a Day, Steve Miller Band. Bookmark the permalink.