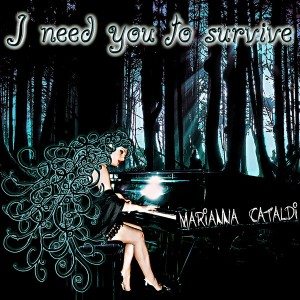 Marianna Cataldi is the very first artist I’ve covered so far on this challenge who hails from the country of Italy. I can’t find much of a biography on her, nor much information on her releases (based on what I found, I’m pretty sure “I Need You to Survive” is her first official single release), but all I have found indicates that she is primarily a singer with a background in Italian opera. After being discovered by a small independent producer and putting out a few records, she found the bulk of her professional work in composing and singing TV theme songs and radio jingles, as well as some background singing for various orchestras and stage musicals. Her biggest break probably came in 1998 when Disney invited her to be the singing voice for the title character of the Italian dub of Mulan, a huge international hit at the time. I looked up her Italian version of the hit song “Reflection” and it’s actually quite lovely. Since then, she’s continued to have moderate success in composing, background singing, and vocal coaching across various platforms – nothing that will get her a huge number of results in a Google search (as I’ve found out), but she’s still getting work nonetheless.

I listened to a few tracks from her 2015 album The Power of Passion, which consists largely of Italian operatic covers of themes from classic movies, such as The Godfather, Romeo & Juliet, and Love Story. While I can’t imagine myself listening to much of this in my free time, it’s hard to deny that her pipes are impressive and she brings something interesting to the table with each and every track. The reason why I’m talking so much about all of her other work and ignoring the single at hand, “I Need You to Survive”, is for good reason. The most succinct way I could describe this recording is as a weak attempt to tap into whatever Within Temptation is doing. As opposed to the intense orchestral backing found in her classical tracks, we’re instead treated to something darker, moodier, and pretty unnecessary. Besides the fact that the title is grammatically awkward (it reads like a demand – “I need you to survive, so do it!”), the lyrics about one’s desperation in a midst of a struggling romance could have come from any other similar song under the sun. Despite the fact that Cataldi plays her part adequately, the melody has absolutely nothing going for it and it’s clear as day that she is just so uncomfortable with this material. I guess this is her attempt at going to pop route, and I’m sure that there are better examples of this out there – I’m still seeking out her cover of Kate Bush’s “Wuthering Heights” with no success – but this certainly isn’t it. It’s a potentially okay song at best that is, in the end, bogged down by clumsy songwriting and absolutely dismal production. I’m gonna have to pass!

Like Loading...
This entry was posted in Uncategorized and tagged 2000's, 2008, Italian, Marianna Cataldi, One Random Single a Day. Bookmark the permalink.