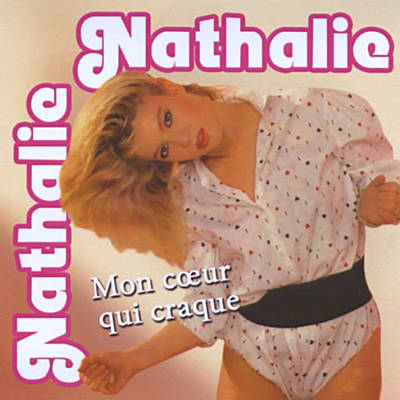 For today’s random single, I’ve got somewhat of a ghost artist on our hands. Judging by the look and feel of this particular single, I immediately took Nathalie as a bit of a superstar in her home country – but that seems to be far from the truth. I’ve attempted numerous Google searches and browsed through all the music sites and I have next no no additional information on this artist, except that her birth name is Nathalie Gabay and that she is Belgian. Also that this single was originally in English under the title “My Love Won’t Let You Down”, with the French version coming afterwards. I couldn’t even find the titles of any album releases she had ever done, which brings me to assume that she never recorded a whole album – or anything else, for that matter, besides the small string of pop singles she put out for the European market between ’82 and ’87. Still, the initial single had to have gained enough momentum for there to be some demand of a French-language version, so I can’t imagine that Nathalie as a artist was that much of a flop in her day.

The song itself isn’t anything particularly special, but I’ll be damned if it isn’t catchy. The performance is backed by the quintessential synthpop sonic aesthetic, with prominent keyboard riffs, a funky bass groove, and some pretty exotic-sounding drum machine beats. Nathalie herself isn’t a particularly good singer (or at least this recording isn’t the best exemplifier of such), but with such radio-friendly electronic pop fare, mind-blowing vocals aren’t particularly necessary. The song is a simple love song from one party to the other, happily pleading to never let their good thing end. The lyrics don’t amount to anything much deeper than what can be found in its chorus: “My love, oooh / Won’t let you down”. Yet, taking influence from both electronic New Wave groups, such as Human League and Dead or Alive, and Morodor-produced disco rhythms, the synth-laden production and sound of this whole project sounds just so positively 80s. I especially love the hook that implements the songs title – “Ecoute mon cœur qui cra-cra-craque”, which translates loosely to “listen to my heart cra-cra-crack”. It’s a clever little touch that works beyond the simple melodies and copy-paste nature of its production to mark this one a tiny step above any other radio-friendly synthpop tracks.

Even though I don’t see this single as particularly exceptional to the pop music scene of the time, it definitely feels like something that listeners of the 80s would have eaten up completely. It does baffle me, then, how Nathalie has seemingly disappeared into all obscurity. I feel like I was lucky to find this single on Spotify – I can’t even find it available to purchase on iTunes! I guess it must’ve been a case of her simply getting lost in the shuffle that was the synthpop boom of the 80s, with so many other similar, more visible artists making bigger, broader waves through the course of the decade. It’s probably a case of Nathalie just missing that little something that made her stand above the rest in some way or another. As for the song itself, I’m glad to have listened to it. It may not be amazing, but the 80s had brought us so much worse pop music than this anyway, so it’s always nice to stumble upon a forgotten non-US gem that hasn’t been overplayed to oblivion.

Like Loading...
This entry was posted in Uncategorized and tagged 1980's, Belgian, Nathalie, One Random Single a Day. Bookmark the permalink.