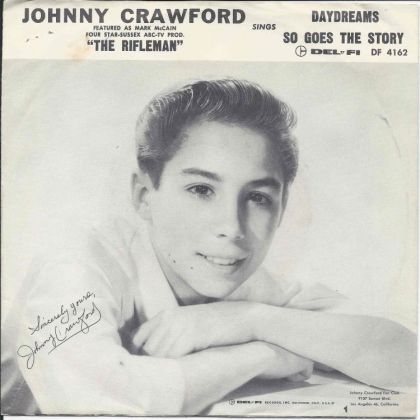 Almost by sheer fate, right when I’ve just written about a song in a style that is a direct backlash to the newly lavish tendencies of production that American music of the mid-60s have taken (“Ich sprenge alle ketten”)  I’ve now stumbled across a single that exemplifies the exact style of music from which this said lavish production was decidedly moving away! But let’s take a step back. Johnny Crawford made his start in the entertainment business as one of the original 24 of Walt Disney’s Mouseketeers in 1955, when Crawford was only eight years old. When he was released from contract, he appeared in dozens of TV spots before his big break at the tender age of twelve, when he played a prominent role in the popular western series The Rifleman. After a few seasons of this show, which garnered him an Emmy nomination, he embarked on a music career which made him immensely popular amongst young audiences. His single “Cindy’s Birthday” made it all the way to #8 in 1962, and it was ranked the 69th biggest song of the whole year.

Up until now, I had only ever listened to “Cindy’s Birthday” and… yeah, I’m not a fan. There was this period in the late 50s and early 60s where popular music was oversaturated by kid performers who broke out between the ages of thirteen and nineteen, introducing themselves with quaint anthems about young love and romance. “Cindy’s Birthday” is one such song, and boy is it schlocky. Amidst bloated baroque-influenced production, fifteen-year-old Crawford emits antiquated lyrics about skipping out on homework, movies, and other pastimes in favor of writing a song for his beloved Cindy, who is another year older today. It’s just as chintzy as it sounds, and it’s easy to imagine how this would be a trend that the US in the 60s would rush to move past in the middle section of the decade. And just as most of these teen idols fizzled out after only a few releases, so did it become evident that Crawford’s music career was bound to go nowhere. Nonetheless, he stuck to his day job as an actor and it’s worked out pretty well for him through the decades.

“Daydreams” was the debut single from Crawford, released a few year before he found his musical footing with “Cindy’s Birthday”. Stylistically, it checks all the same boxes found in similar teen pop of the time – dreamy vocals, classical-tinged production, lyrics about love or lack thereof. It’s bland as bland could get, with lines that seem to be regular copy-paste types that could’ve been found in any number of songs of the era. If anything, I’d say that this song seems to deliberately follow along the wavelength of The Everly Brothers’ 1958 hit single “All I Have to Do is Dream”, with the motif of dreams and their fantastical quality being the common factor. Both songs are about the speaker wishing that their object of desire were close to them but since this cannot be so, for whatever reason, they compromise by relying on dreams to take them to their ideal situation. There’s no denying the similarities between when the Everlys sing, “I can make you mine, taste your lips of wine / Any time, night or day / Only trouble is – gee whiz / I’m dreaming my life away” and when Crawford states, “I can see your face, I can hear your sighs / I’m never lonely , but they’re only daydreams”.

Also, both songs have the same “beautiful, until you listen to the lyrics” quality about them. I mean, I’ve always admired “All I Have to Do is Dream” as a tender love song – until I considered the theory that perhaps they are singing to a person who does not desire the relationship. The line “Whenever I want you, all I have to do is dream” alone implies a one-sided nature of the situation – “Whenever I want you”, not necessarily vice versa. Similarly, Crawford here is speaking of a girl who probably hasn’t even reciprocated her feelings toward him yet, hinted when he says “Then you start to say the words I wanna hear / They’re never spoken, but I keep hoping”. Nonetheless, he still imagines her in “a white wedding gown”, as if there’s a chance they even have a future together in the first place. Also, he’s fifteen! Even though I guess most people got married by eighteen in those days anyway, considering how many popular songs consisted of teens anticipating the day of their wedding – it makes me sick just to think about it.

Anyway, I’ve probably given this song much more attention than it probably deserved. The lack of personality in its lyrics and production is loudly a symbol of the era from which it comes. I’m just happy that a wave of talent came by to eventually carve the 60s into what is widely considered the best decade of pop music, sweeping away contrived teen pop like this into obscurity. Needless to say, Johnny Crawford is one of those names with which I hope to never spend another hour again.

Like Loading...
This entry was posted in Uncategorized and tagged 1960's, 1961, Johnny Crawford, One Random Single a Day. Bookmark the permalink.