One Random Single a Day #42: “Moonlight Serenade” (1939) by Glenn Miller and His Orchestra 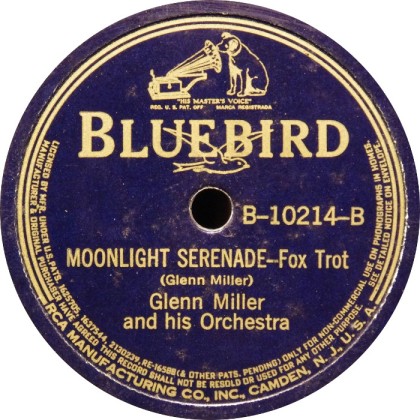 There is this popular quote of unknown origin that is commonly paraphrased as, “writing about music is like dancing about architecture”. Basically, this boils down to the idea that writing about music is generally really hard, since the act of writing and the act of making and playing music are two completely separate modes of artistic expression. In general, I can’t say that I have a relatively hard time writing about music – sure, there are certain artists and songs that really challenge my ability to pull the usual critical strings, and I do often have my own phases of writer’s block and such. However, in no other instance does this phrase ring more true than when I’m given the task of writing about jazz. It’s not that I dislike jazz – I do enjoy quite a lot of it, especially this piece, which is widely considered one of the most famous jazz standards. Explaining what exactly makes it good and worthwhile, however, is what perplexes me. It’s just hard to elaborate on such feelings when words don’t seem to do much justice at all.

Nonetheless, I’ll try the best I can. I guess I’ll start by saying that this piece is more accurately an example of swing music, a genre that built its roots from jazz, blues, and classical music to create something more centered on a groove and rhythm suitable for dancing. This genre dominated in the states during a period known as the “swing era”, lasting from about 1935 to 1946m, and was one of the most popular styles of American music until just after WWII. As opposed to earlier forms of jazz, which relied a lot of improvisation across all levels of arrangement, swing music relied on a strong, fixed rhythm section, with single instruments like tuba and trombone improvising over this steady melody. Benny Goodman, Duke Ellington, Count Basie, Louis Armstrong, and Glenn Miller himself are among the list of notable musicians and bandleaders that rose to popularity in this time.

By 1939, Glenn Miller had already had a pretty prosperous career as trombonist, composer, and arranger across numerous records for a number of different bands and studio groups before he broke away and start recording with his own big band. While Glenn Miller’s Orchestra initially found themselves lost in the fold of the slew of other big bands popular at the time, they quickly developed their own sound and did so with great success. They broke many commercial records with a number of their original records, many of which have become regarded as standards these days. Miller continued with this success all the way through December 1944, when he boarded a single-engine plane to fly from the UK to Paris, only for him and his small crew to disappear somewhere around the English Channel; thus, he was declared dead in absentia.

Now, here I must admit that swing music isn’t really my thing. I do enjoy some of the bands from the swing revival of the 90s and early 2000s, and I also much of the older stuff with a vocalist involved, but as far as actual instrumentals from the traditional swing era is concerned my brain tends to glaze over while listening and it usually ends up just being background music. And this is certainly the case with Glenn Miller’s work, as I listened to a few recordings while writing the last few paragraphs and found myself relatively uninterested. Even with such classics as “In the Mood” and “Chattanooga Choo Choo”, they all sound pretty similar to me for the most part. It’s probably my own fault for ruining my music sensibilities with all the pop music I consume, but it is what it is. With that being said, though, I think “Moonlight Serenade” is absolutely beautiful and the best piece of music I’ve ever heard from the guy.

It’s probably the clarinet melody that gets to me more than any other aspect of the piece. It’s such a recognizable melody that has been a staple of countless movies, TV shows, and other bits of pop culture depicting WWII, yet somehow this doesn’t dampen the effect the recording has on myself. I could imagine this meaning a lot to folks who were alive during the time of the record’s release, bringing back memories of the times when they were so much younger and can now only look back upon and read like a storybook. I obviously cannot relate, but this does offer some glimmers of nostalgia that I think could mean something different and special from listener to listener. Even more valuable is the worn quality of the recording, obviously using a more older technology in capturing sound, which gives the clarinet a spooky, almost ghostly sound. And then it makes me think about how literally everyone involved in this recording is dead – which, while unsettling, is also weirdly comforting as well.

It is really hard to talk about this instrumental when there’s no guarantee that you, the reader, are listening to it at the same time as reading over what I have to say. Otherwise, it probably means nothing when I say that, other than the clarinets, I enjoy the soft backing bass rhythm, the trombone punctuations, the twinkling piano that comes in from time to time, the moment when the trombone and clarinet switch off for a couple solo bars before returning back to blissful unison, or the moment when the clarinet has a prolonged solo of its own. Overall, though, this only evokes pleasant imagery for me – long walks along a nighttime beach, stargazing on a roof, driving along long, empty highways under a clear, dark sky. It’s nostalgic and sentimental without being overtly tragic or caught up in any semblance of melodrama. Not too bad for a bandleader whose works always sounded a bit too sterilized for my own liking. (Oh, I actually successfully wrote about jazz? Awesome!)

Like Loading...
This entry was posted in Uncategorized and tagged 1930's, 1939, Glenn Miller, One Random Single a Day. Bookmark the permalink.

2 Responses to One Random Single a Day #42: “Moonlight Serenade” (1939) by Glenn Miller and His Orchestra