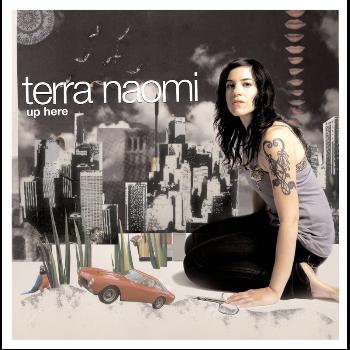 I mentioned a few posts ago that I would be focusing on only female-led recordings for the next few reviews of this project. While I am falling behind on this challenge – One Random Single a Day has already become “a few random singles every couple days or so”! – this promise still stands. I really wish there were some way that I could review a single that is completely untampered by men, in that there are no men (and especially white men) present with the performance, writing, production, engineering, or any other aspect of the recording. However, (white) men are so prominent in the industry, this is next to impossible to find, so we’ll just have to make do with what we have. In the meantime, here’s another lady artist to discover! Terra Naomi was born and raised in New York; she studied classical piano and voice professionally and even pursued a degree in opera from the University of Michigan while also attending a prestigious opera program. After college, she moved back to New York, wrote some of her own songs, and tried her hand at a music career, performing at many venues across Manhattan. Following a US tour in 2003, she moved to Los Angeles to further push her career.

Naomi’s big break came in 2006, when she exploited the then-new website YouTube to promote her music via virtual summer tour. She recorded the video for her first single “Say It’s Possible” in her own apartment; after being posted on YouTube, an explosion of interest followed and many fans proceeded to cover the song in numerous languages and musical styles. Therefore, it’s safe to say that Naomi is the very first YouTube music sensation, which actually makes her a pretty notable relic from an age when producers were first realizing that careers could be made from internet reactions. Soon after, she was signed to Island Records, where she recorded her first album Under the Influence, after which she left the label and proceeded to release her own music independently. Although she has yet to repeat her initial success, she is still recording music and touring to this day.

Although Naomi’s discography so far consists of four studio albums and five EPs, she only ever released three official singles in her career, all three of which came from her debut; “Up Here” is the last of these three. Stylistically, she falls in the league of all those female singer-songwriters from the 2000s, with more of an edge than their 90s equivalent. Instead of Jewel and Sarah McLachlan, think Michelle Branch, Ashlee Simpson, and KT Tunstall. While “Say It’s Possible” is notable for its lightness and breezy composition, “Up Here” is a bit more edgier, with  Naomi’s lyrics and vocal delivery being highlights of both. “Up Here”, in particular, has some particularly interesting lines that are pretty conscious of their image-dependent structure (“Maybe its the tattoo on my arm that I drew / …A heart and two flowers intertwined with a vine” and “I get up on the stage, trained monkey in a cage” are favorites). Moreover, it’s not hard to see why so many would enjoy listening to her – she’s really not too bad of a singer. I do prefer her gentler compositions, like “Say It’s Possible”, where she just seems more comfortable; here, the higher, grittier notes seem to be a bit of a challenge to reach, but she still expresses her venomous lyrics rather effectively and truthfully.

I think where the song falters, though, and in the lyrics themselves. This is Naomi’s attempt to appeal to the crowd that veer towards more harder rockin’ female musicians; as a result, some of these lyrics are pretty cringey. Take the chorus: “And up here, I am who I am / And if you don’t like it, then fuck you, man”. I get that this song is a message to an ex-lover with whom the speaker doesn’t remain on good terms, and I get that it’s supposed to be bitter. However, it’s really tough to make a line like “fuck you, man” sound anything but juvenile and try-hard, and this isn’t a good example of such. There’s also a weird amount of slut-shaming in this song that I can’t really see eye-to-eye with. In between Naomi’s declarations of how she’s so much better than her ex now that she’s more famous than he is, she also remarks on the “hot blonde” who attends her show with him, as well as “another woman” in “another town”. I get that she’s noting these women in an attempt to call him out for being the lousy cheater he probably always was, but in doing so, she also perpetuates the virgin/whore dichotomy that narratives often use to pit women against each other, with herself being posited in the former half of said dichotomy. I mean, she literally hammers this point down in the chorus when she states, “I’m not a thief and a whore”. At the climatic final verse of the song, moreover, she states that he, “like all good men, still fall to the floor / When a great big rack and a ripe round ass/ Walk through that door”; she implicitly separates herself from these descriptors as the “right” kind of women, as if somehow the women themselves are partially at fault for this guy’s actions.

I would hesitate to say that these lines are exactly harmful, per se – I’m just annoyed at seeing such lazy trope-induced writing in a song that could have had so much more potential. The rest of the writing also seems just as uninspired, with lines such as “Please don’t follow me around next time I’m shopping at your store” and “I’ll be exactly who I am / And if you got a problem with it / Well, that’s your problem, man” taking up the bulk of the song. I could see this potentially being a good kiss-off anthem for girls and young women feeling the bitter emotions of a first breakup – but then the negative depictions of women throughout the song kind of kill that potential almost immediately. I have a feeling that this song was pushed by the label in an attempt to compete with similar artists like Avril Lavigne and Michelle Branch, but it’s sorely obvious that this just isn’t Naomi’s shtick. Now that I’m finally finished writing this, I think I’ll go listen to “Say It’s Possible” a few more times and relive the glory days of early YouTube.

Like Loading...
This entry was posted in Uncategorized and tagged 2000's, 2007, One Random Single a Day, Terra Naomi. Bookmark the permalink.