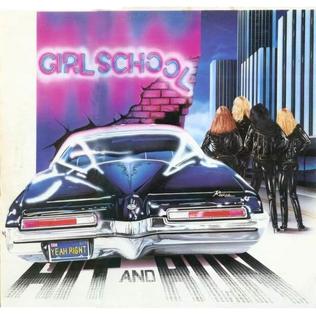 I am such a big fan of ladies making waves in fields that are largely dominated by men. Women have the ability to do anything that men can do and do it just as well – and even better – and that includes making raw, totally kickass heavy metal music. Girlschool are really important in this regard, in that they are one of the only all-female bands of the 80s new wave of British heavy metal. They are also noted as being the longest-running all-female rock band, still active, recording, and touring nearly 40 years after their conception in 1978. I could only imagine the amount of sexism and general disrespect the members of the group have received throughout their entire career, especially considering machismo and hypermasculinity so proudly encapsulated by much of metal culture. It should be noted, though, that the band’s existence was no gimmick – their musicianship has been consistently great throughout their many years and albums, and upon listening to any one of their many singles, it’s hard not to notice their utter enthusiasm for the music they’re playing. “Race With the Devil” and “C’mon Let’s Go” are only two examples of the band’s penchant for fast, fun metal music and I dare say that they’re certainly great places to start with Girlschool.

Hit and Run is Girlschool’s second album, having been produced by Vic Maile who also produced Motörhead’s classic album Ace of Spades. It would go on to be Girlschool’s most successful album, reaching #5 in UK charts; moreover, the eponymous single would be their most commercially successful single, ranking up to #32. Musically, it’s driven by the powerful, aggressive guitar from which Girlschool has made a name for themselves as 80s metal innovators. It’s one of their more basic singles, remaining rather simple in their riffs, melody, and song structure as a whole. Lyrically, it’s a post-breakup declaration of heartbreak and loneliness, with typical lines the likes of which we’ve heard in many a breakup song across multiple genres (“I was out in the cold / Alone in the night / How could I carry on? / Felt so empty inside / …All you gave me were promises / Nothing better than lies”). The chants of “hit and run” through the chorus represent, presumably, the metaphor for how savagely and carelessly the ex-lover broke her heart and left her alone (it may also be a metaphor for sex – he’s used her for her own needs, then ran away when convenient). The speaker herself feels like a victim of a senseless crime, which isn’t really all that far from the emotions of someone who is taken off guard by sudden heartbreak.

Nonetheless, the moods given by the arrangement and production of this track (and others on the album) are that of power, aggression, and perseverance. It’s true that the lyrics of the track are candid expressions and feelings that are often experienced by one being beaten down by heartache; however, the post-chorus bridge after the second verse gives us a glimmer of positivity in these bad vibes: “But I know better now / …I’m gonna live for today / Say goodbye to the bad times / Now I’m free on my own”. After this, the final chants of “hit and run” feel more like exertions of dominance and the song ends on a more defiant note. Popular music is already flooded by so many weepy ballads about how abruptly life stops after a breakup, which is especially unfortunate when they’re coming from women singing about men. Girlschool, however, wants to let the world know that they won’t take anyone’s shit and they certainly won’t let negative, down-hearted feelings damper their potential for the brighter future they deserve. It may not be the finest crafted metal song this side of the coin – there’s probably another Girlschool song that is a better example of such – but it effectively demonstrates the surefire fact that the band can party and rock hard just as well all the boys.

Like Loading...
This entry was posted in Uncategorized and tagged 1980's, 1981, British, Girlschool, One Random Single a Day. Bookmark the permalink.