One Random Single a Day #55: “Never Together But Close Sometimes” (1978) by Carlene Carter 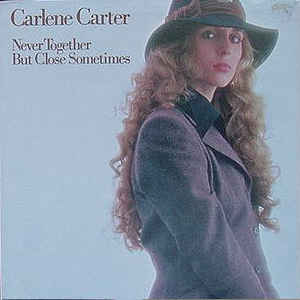 Carlene Carter is an American country singer-songwriter who hails from Nashville, Tennessee. She is the daughter of country musicians June Carter and Carl Smith, which gave her a real head-up in jumpstarting her music career. She has been recording music since 1978, with the single in question today being her very first. However, her career didn’t really take off to any significant direction until the release of her 1990 album I Fell in Love, which would grant her an album and two singles that reached #3 in all their retrospective country charts. The title of this song earned her a Grammy nomination, and her next album Little Love Letters granted her even more commercial success in the country world. These 90s hits demonstrate the sound for which Carter is most well-known for: upbeat, retro-sounding honky tonk rhythms tinged with modern pop production and lyrics about love and sometimes the lack thereof.

It does feel awkward, then, listening to Carter’s first single from her eponymous debut album in relation to her later work for which she’s received much of her praise. For one thing, the sound alone seems very weighted-down by the era from which it comes. It definitely gets much of its stylings from the southern rock of its time; even though the guitar lick is arguably reggae-based (already a distracting inclusion), I hear quite a bit of Steve Miller Band and even Lynyrd Skynyrd influences in the mix. This is demonstrative of the changing tides of the country scene through the years – her later, much more popular singles are poppier and arguably more separated from the symbolic country twang than a single such as this. However, I would also make the argument that the ’78 single is less explicitly country than the ones from 1990. At least the latter are impacted by the country revival of the 80s, as well as the rising country acts of the 90s, while “Never Together” feels a bit more rooted in the southern rock tradition to fit comfortably alongside other acts of the day, like Dolly Parton and Kenny Rogers.

I do enjoy the lyrics, though, as limited as they can be in a song that just misses the two-and-a-half minute mark. “Never together, but close sometimes” pretty much sums up the message of the tune. It briefly details the breakup of the singer from her love, a boy from New York whose “winter was so cold [she] had to split” and make her way back home to the south. The title sums up the complicated feelings felt by two people who want to stay together so badly, even if they know it couldn’t ever possibly work out in the end. Much like blue birds sharing the sky with airplanes, they are close to touching but never get close enough to satisfy their vulnerability. Carter hammers this point in with the final verse, with a brief description of “fools sitting glued to that stool / Drowning their sadness in rosy wine”, as if in reflection of her own self in close relation to those on the stool – though never close enough to touch.

It’s pretty obvious that this is a first stab at a single; for the most part, those first singles are far from indicative of the potential of the corresponding artist. Carter does a decent job in her performance, but there are just too many shades of beige going on that prevent it from being anything particularly memorable or exciting. The melody is unexciting and, when set across three verses and three chorus, does nothing very interesting or profitable for Carter’s vocal ability. It’s clear that there’s some talent there, but it might be that there’s so much of the label’s and producer’s fingerprints all over the track, leaving very little breathing room for Carter herself. I’m glad she finally hit her stride, but the impression that “Never Together” leaves me is that I should probably skip all of this early stuff of hers.

Like Loading...
This entry was posted in Uncategorized and tagged 1970's, 1978, Carlene Carter, One Random Single a Day. Bookmark the permalink.