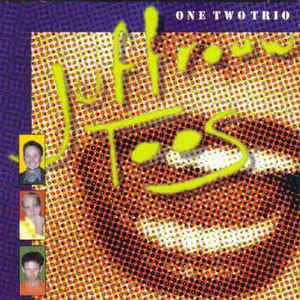 I feel like I have yet to be bested with any of the groups or artists that I’ve stumbled upon in this challenge so far, but the group of the day today is really, really trying to do just that. When I listened to the first few seconds of “Juffrouw Toos”, I had to do a double-take. For one thing, it was a live recording, which would automatically have me searching for a different version since I always want to go for the legitimate studio recording of the official single release. Turns out, the was the official single release – which is still acceptable, if a bit a unusual! But that’s not the only reason I came out scratching my head. I’d like to invite you, reader, to check out this video of a live performance of theirs, the start of which features them performing the song in question. From their playful uptempo music to their simple setup, for all intents and purposes One Two Trio sounds like a children’s group – something akin to The Wiggles for a Dutch audience. Yet, even though there are definitely children in that audience, it is very prominently adults, young and old, who are getting into the performance, dancing and singing along to every word. This just perplexes me, especially considering that “Juffrouw Toos” appropriates the melodies from “Twinkle, Twinkle, Little Star” and “The Muffin Man”, as well as other nursery rhyme sounding tunes. It’s so weird!

The live recording in the single release of “Juffrouw Toos” also features a large group of people singing along with the group, engaging in call-and-response, and simply cheering along in excitement. Every other live performance of the song I’ve found also keeps the tradition, which leads me to believe that the group is relatively popular in certain circles of Dutch popular music listeners. Nonetheless, I haven’t been able to successfully find much information on One Two Trio’s history nor their commercial success. I do know that they initially started off as street performers, eventually gaining a following from then on, and are now one of the most popular party bands in the Netherlands (at this site you can apparently request them for a gig, so go ahead and book them for your next party). And I think that’s what it all boils down to: they’re a novelty group, performing simply for jokes and light-hearted fun, and little else. So, less like The Wiggles and more like The Aquabats in that sense. It is a bit strange knowing that this came out within a decade of groups like Within Temptation, Intwine, and Toontje Lager, which all sound relatively steeped in modern music traditions. However, it’s also true that the Netherlands are more deeply indebted to their folk music traditions, which justifies how a song like “Juffrouw Toos” could become popular.

The lyrics to this song almost don’t matter. “Juffrouw Toos” translates roughly to “Miss Cathy”, and the song primarily recounts an overachieving student who has an innocent crush on his pretty teacher. The following verses are, once again, a series of nursery rhyme lines with simple lyrics that don’t really tie into each other in any way. I’ve listened to a few other One Two Trio songs, and they are pretty much married to this exact formula, sometimes throwing in melodies to pop music, traditional Americana tunes, or TV theme songs to keep things interesting. Not that this song is really interesting at all, though. I just get the overwhelming sense that while this would be enjoyable for young listeners of a certain age, I can’t imagine that anyone older and more familiar with the array of other popular music out there could find any redeeming value in the truly childish nature of this all. And yet, I remain baffled, since there so obviously is a thriving adult fanbase that keeps this band going. It’s pretty cool that I stumbled upon this bit of weirdness, but you wouldn’t ever catch me listening to this candy-coated fluff on my free time.

Like Loading...
This entry was posted in Uncategorized and tagged 1990's, 1995, Dutch, One Random Single a Day, One Two Trio. Bookmark the permalink.