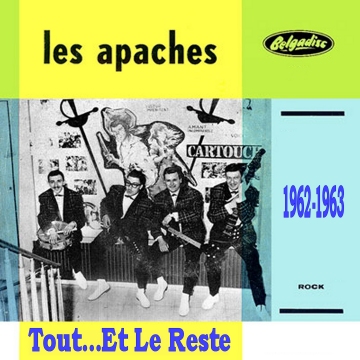 Here’s yet another one of these ghost bands. It’s not that they are literally ghosts (even though that would be awesome), but it’s just that for the life of me I cannot find much of any additionally information on the group that could possibly help me understand today’s single a bit better. Although there’s nothing at all invalid about reviewing a record with no more information on hand than the sonic qualities of the record alone, whenever possible I also want to learn about the band or artist themselves. I hold the opinion that learning more about the artist’s history and applying the single to a larger context could help provide a richer listening experience in whole. As it stands, though, all I really know about Les Apaches is that they hail from Liége, Belgium and only officially released four instrumental singles between 1962 and 1963. The photo above, while being the only decent record cover image I can get, is also the only photo I can find of the group period – for all I know, this could be the only picture of all of them together in existence!

So I ended up listening to all four of their single releases (I figured I may as well). For the most part, the impression they give off is that they are a mild attempt to pull off what popular American instrumental groups- like The Shadows and The Ventures – were doing at the time. 1963 was also the year of such chart smashing surf rock instrumentals as The Chantay’s “Pipeline” and The Surfaris’ “Wipe Out”, so it would make sense that groups from across the pond would attempt to tap into this trend as well. Their single “Colorado”, for example, is quite obviously trying for the same lyrical, atmospheric instrumental sound as “Pipeline” so exquisitely accomplished. Nonetheless, although the bassline in this one is similarly animated and quite delicious to listen to, the twangy guitar riff packs far less of a punch and does damper the mood in this one quite a bit. That might just be where Les Apaches falters: with all the propensity for instrumental structure of The Shadows, but significantly less of the magical formulaic qualities that make The Shadows so timeless. And yes, it it terribly clear that they were trying to market themselves off of The Shadows’ appeal – their name is Les Apaches, for crying out loud!

But anyway, onto the single in question for the day. “Nord-Express” is… well, no different from any other description I gave of the band’s music above. If “Colorado” was akin to a watered-down “Pipeline”, “Nord-Express” is a significantly less cool “Wipe Out”. It does the whole twelve-bar blues thing, although the bass arpeggio present here is so standard and overused, it’s hardly worth batting an eyelash at. The guitar riff that comes in later livens things up a bit, but that bass riff is so heavy it just weighs down pretty much the rest of the recording. Even more strange, after a few bars of playing, all of the instruments just kind of back away and leave the drums to perform a solo until they eventually come back in for the finale. Once again, this seems like yet another tribute to the drum fills in “Wipe Out”, but there’s no denying that this is so much less effective.

Maybe it’s unfair to describe a small band in ways that compare it to bands that are clearly huge deals, but when it’s so clear that this is exactly what they’re going for, pulling out the contrasts seem all the more fitting. This band and their label saw that the surf rock thing was becoming big in the States and decided to try it out for themselves, using the title of a Shadows track for their own name and lifting trends from such bands in order to gain some of their appeal in the wider music market. Clearly, they weren’t all that successful, and I feel like part of it was definitely because of their lack of their own defined image. Why would anyone want to listen to lesser versions of Shadows and Chantays records when they could just listen to The Shadows or The Chantays? In any case, though, the band is far from bad – I just wouldn’t think to listen to them besides in the standard disposable background noise kind of way.

Like Loading...
This entry was posted in Uncategorized and tagged 1960's, 1963, Belgian, Les Apaches, One Random Single a Day. Bookmark the permalink.