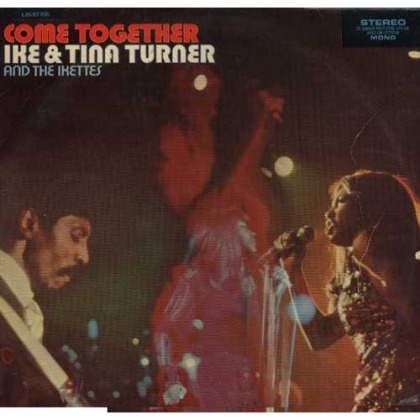 For some reason, I seem particularly prone to coming across cover songs on this Random Single challenge lately. Although I’ve only written about ten cover songs in this challenge so far, at least half of them have come up within the past thirty posts or so. That’s no complaint, though! As I’ve definitely mentioned before, I love cover songs and it’s all the more exciting when I discover an artist I genuinely love and appreciate covering something I’m already pretty familiar with. The single in question today fits this bill all too perfectly. Ike & Tina Turner are considered one of the most important, legendary ensembles to ever grace the American R&B scene. By 1969, they had already made a name for themselves as a duo who can truly work their way around any number of genuinely soulful arrangements with little difficulty. Recordings like “I Idolize You”, “We’re Gonna Work Out Fine”, and “River Deep – Mountain High” demonstrate their flexibility to demonstrate their talent across a number of moods.

Ike & Tina’s recording of “Come Together” – originally by The Beatles – probably marks the start of the duo’s string of popular, soulful renditions of contemporary pop music. After this, they would crack the top 40 with their powerful cover of Sly & the Family Stone’s “I Want to Take You Higher” and would go on to win a Grammy for the even more ubiquitous cover of Creedence Clearwater Revival’s “Proud Mary”. In particular, the latter is one of my favorite cover songs of all time. I do genuinely enjoy CCR and I even dig their original recording of “Proud Mary”, but the double-timed souled-up rendition of the song is on a whole different level entirely. While I often gripe about lazy cover songs that don’t do anything new or unique from the original source material, this single could probably stand as the definitive example of an artist taking a song and crafting it into their own animal entirely. I just love it so much.

On the contrary, unfortunately, “Come Together” isn’t really the best example of this. For the most part, the tempo stays stagnant, all the notes and beats are hit exactly the same, and the melody remains exactly like the original with seldom any additional flairs or deviations. I guess this could also be faulted to the song being so overplayed already that it’s so hard to imagine any other version being the “definitive” version – as was the case with “Proud Mary”. But this single comes only a couple years after the original, so there should’ve been plenty of wiggle room there. Then again, I guess it’s not to fair to compare this to cover songs from the duo that are to come – it’s safer to assume that the musicians were merely just getting their feet wet at this point!

So, what’s good about this one, then? It’s certainly less layered instrumentally and the production doesn’t quite fare as interesting as the Beatles’. With that, I dare say that all this recording’s strengths come solely from the energy and charisma of Tina Turner herself. I should probably note that when I read “Ike and Tina Turner”, I’m really reading “Tina Turner plus some other guy” – I just don’t care for Ike much, as it’s clear that Tina’s presence just overshadows pretty much everything he attempts to do (with the exception of some of their earlier duets). As far as this single is concerned, it’s exactly what one would imagine from an imaginary scenario where Tina Turner performs “Come Together” on karaoke, for better or for worse. It’s not one of her better performances, sure, but even a not-so-good Tina Turner performance is better than most. I never cared much for this song in the first place, but I’d much rather take on Turner’s huskier delivery over Lennon’s any day of the week.

Like Loading...
This entry was posted in Uncategorized and tagged 1970, 1970's, Ike Turner, One Random Single a Day, Tina Turner. Bookmark the permalink.