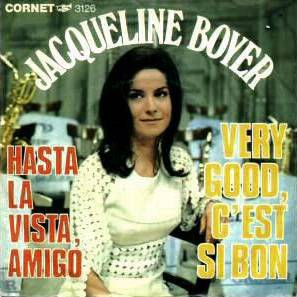 Jacqueline Boyer is a French singer and actress, the daughter of French performers Lucienne Boyer and Jacques Pills. Years earlier, her father had competed on the Eurovision Song Contest with the song “Mon ami Pierrot”, in which he ended up placing last. Interestingly enough, Boyer would win the competition herself in 1960 with the song “Tom Pillibi”, a moderately uptempo, cutesy number definitely in the category of fluffy pop that generally wins these contests. This would also go on to be her most successful and well-known single, reaching #33 in the UK this same year.

As far as any other information on the singer is concerned, I’ve come up relatively unsuccessful in digging up any other information on her biography or on any of her other records for that matter. All I could really find is that she released a few more records after this and also appeared in a few movies, before seemingly falling off the face of the industry altogether. I can’t even find the lyrics for this song anywhere online – which is troubling, considering that this song is in German and my knowledge of the German language is fairly limited, certainly not to the point where I can translate by ear very successfully. It’s actually fairly unusual that I happened to stumble upon the one German track in her repertoire, since nearly everything else I’ve found of hers has been in French.

Nonetheless, I’ll write about this one based on what I can hear and discern from the single alone. I actually listened to “Tom Pillibi” a few times before this one, and I can definitely say that I prefer this one to the Eurovision winner. Boyer was only eighteen when she recorded “Tom Pillibi” and the cutesy nature of her delivery in that song can get so shrill and grating at times. “Very Good, c’est si bon”, on the other hand, is more of a midtempo fare – it’s still pretty sunshiney, but it’s also clear that her voice has improved and strengthened through the years. For being a song in the German language, there’s something that just sounds so distinctly French about this one. She reminds me very vaguely of Jacqueline Taieb, and I’m sure the accordions in the backdrop of this carry on the stereotypically French atmosphere. Still, I do wonder if this would count as a member of the schlager tradition of German music (which I recounted in my review of “Ich sprenge alle Ketten”); it would certianly help if I actually knew the lyrics to this one.

From what I can gather in the bits of lyrics that I do understand, this is a fairly straight-forward love song from the speaker to her beloved. It doesn’t take a whole lot of brainpower to figure that one out, honestly. From the happy-go-lucky tone of the instrumentation and production, to the wordless “la-di-da” vocal solo from Boyer herself, this song practically oozes with sunny happiness and positivity. This might make it the polar opposite of “Mit 17 hat man noch Träume”, which looks upon youth as a tragic stage long gone. Here, Boyer knows that she’s young and in love, and she’s ready to relish every moment of it while she can. I kind of love this. Even though I can’t quite understand the vast majority of these lyrics, the hook of ,“Very good, c’est si bon, das ist wunderbar” is really all you need to get from this. It’s exactly the type of surface-level pop song that I simply cannot get enough of, and Boyer’s youthful magnetism has me bouncing along to the beat with every single listen.

Like Loading...
This entry was posted in Uncategorized and tagged 1960's, 1969, French, Jacqueline Boyer, One Random Single a Day. Bookmark the permalink.