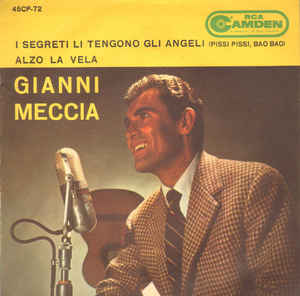 I don’t know where to start with this one… so I guess I’ll start at the beginning. So, Gianni Meccia is an Italian pop performer who seems to be mostly famous for performing novelty, humorous, or otherwise nonsensical songs, mostly throughout the 60s. For example, he has a song titled “Odio tutte le vecchie signore”, which translates loosely to “I hate all old women” – pretty funny, right? Yeah. I haven’t really listened to a lot of his other recordings, but they tend to follow upon a certain breed of dry, surreal humor that could only come from a Western European sensibility. I’ve struggled to find any chart information on what would be considered his most renown singles, but his singles “Patatina”, “Il pullover” and “Il barattolo” seem to be the most present throughout a number of Italian music compilations on Spotify. The latter is notable for being arranged by Ennio Morricone, who included the sound of a metal jar rolling along a gravel platform at various moments in the song. How cinematic!

And then comes this song, which absolutely perplexes me. Although the first line of the song (“Il segreti li tengono gli angeli”, which translates to, I think, “the secrets the angels keep”) is technically its title, most people know it by “Pissi pissi, bao bao”, which is inexplicably the hook of this entire song. This is playfully whispered by Meccia at numerous turns of the song for reasons that I can’t gather. I’ve struggled to find any lyrics for this song anywhere – no lyrics means no attempt to even get a good translation. For what it’s worth, though, I don’t think “Pissi pissi, bao bao” would have much of a translation – it just sounds like nonsense sounds, which is fitting for Meccia’s body of work.

It’s not even very interesting musically, though. It follows many traditional pop standards, being primarily led by simple strings and percussion, with a verse format that repeats itself again and again all the way ’til the end of the recording. If Meccia is a genuinely good singer, there’s no way to get that impression with this song. The melody is boring, and his vocal performance does practically nothing to enhance the bland flavoring of this track. Not even the backing choir – which seems to sing in ad-libs after each of Meccia’s sung lines and presumably represent the aforementioned “angels” – make the track very interesting. If anything, it makes it even more hokey and boring. I’m genuinely unsure how to feel about this track – I don’t understand enough to remark on the subject matter, and the composition and vocal performances are just so flavorless, they go beyond even mentioning. What I do know, though, is that Meccia’s frequent utterances of “Pissi pissi, bao bao” are nothing less than creepy and unsettling, which marks this song immediately up to a dislike for me. I don’t think I’ll be missing much with ignoring the remainder of Gianni Meccia’s recordings from now on.

Like Loading...
This entry was posted in Uncategorized and tagged 1960, 1960's, Gianni Meccia, Italian, One Random Single a Day. Bookmark the permalink.