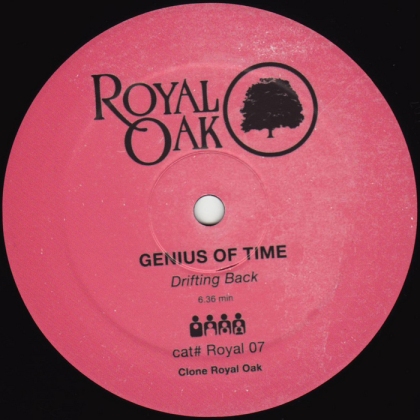 Ah, yes, some more deep house music. This one comes from Swedish duo Nils Krogh and Alexander Berg, who’ve collaborated to create the music project Genius of Time since at least 2010. Their official Facebook page describes them as, “a live show of old school meets new school house, fusing the analogue sounds of beloved machines with modern technologies and possibilities”. While I’m not totally sure what this would entail in the world of house music, I do know that the blending of old and new technologies to create a unique sound is something that a whole lot of musicians are out to accomplish. Their most popular track on Spotify is a number called “Juno Jam”, which certainly sounds cosmic and futuristic in its application, although I could sort of parse out some techniques that I recognize from older house music, like the jungle drums and sharp synths. Truth be told, I really dig it.

“Drifting Back” is a track of theirs from their earlier days. It contains a lot less of the innovative features as “Juno Jam”; on the contrary, it begins just like a traditional house recording, with a sparse drum rhythm upon which more sounds and rhythms are gradually layered. Some time in, some twinkly, sporadic keys are thrown into the mix which implements a sort of jazzy feel to the record, the likes of which I don’t ever hear in a dance track of this type. It’s a very nice, happy record, chock full of nothing but all the best vibes, certainly the best type of record to dance to.

The high point of the record comes about two-thirds of the way through, when alongside the bumping bass and melodic keys, a slight singing mumble is heard in the background of the music. Slowly, it makes its way to the foreground, and the vocals begin to make itself clear: it’s a repetition of “just drifting back, just drifting back”, which doesn’t mean too much on the surface. In the context of the song, however, it somehow works. In a simple, meaningless phrase, all of these good vibes are encapsulated in a steady, simple groove that permeates throughout the remainder of the record. All this is packed in about six-and-a-half minutes, though one could only be wishing that the night itself would last forever.

As I’ve mentioned many times at this point, I’m not a huge listener of the house genre, although I have all the appreciation for its place in the history of electronic and dance music in general. I’m queer as fuck, so how could I not? But anyway, I’m probably not the most reputable opinion-haver of what makes a good or not-so-good house track. In any case, though, I’ve enjoyed every one of the handful of listens I’ve given this one. It’s got an unexpected jazzy atmosphere going for it, and overall it’s just cool as hell. It’s not as immediately ear-grabbing as something as colorful as “Juno Jam”, but sometimes keeping it simple is the best move one could make.

Like Loading...
This entry was posted in Uncategorized and tagged 2010's, 2011, Genius of Time, One Random Single a Day, Swedish. Bookmark the permalink.