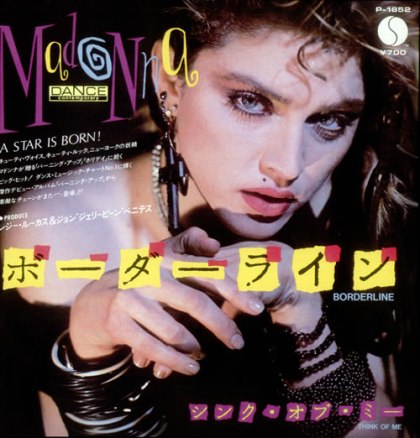 Some time ago, I decided to go on a musical journey of sorts by way of Madonna’s entire studio discography. While I can’t exactly pinpoint the definite reasoning of why I chose this task and landed on Madonna of all performers, I can say that it probably has something to do with her instantly huge sphere of influence upon her debut, as well as her longevity and importance in the pop music world as we know it today. Her music spans nearly four decade and she has worked with a number of producers, writers, and other artists to seamlessly assimilate into whatever style or sound was hip in the era of its conception. While the quality of her albums varies as much as pretty much any other pop musician out there, there’s no denying that she’s released a fair share of truly memorable singles, a handful of which stand among the greatest of all time. Needless to say, I look very fondly upon Madonna.

With all this said, though, there really is no Madonna like 80s Madonna. While not all of her singles stuck quite so quickly, others like “Into the Groove”, “Like a Virgin”, “Live To Tell”, “Like a Prayer”, and – yes – “Borderline” had become instant classics through her effortless combination of playfulness and sex appeal. And contrary to the history of female pop performers of her vein, she has been a powerful creative force behind the vast majority of her singles from the very start. I would dare say that the era between her 1983 debut and the release of her 1989 album Like a Prayer has, to this day, remained her absolute creative peak. Her contributions to pop music during this time are totally indispensable. She didn’t just make fun dance music – she created some pretty impressive pieces of art that form an important fraction of what and how the world sees an entire esoteric era in pop culture .

And yet despite all of her peaks and valleys, I dare say that few of her dozens of singles have even come close to matching the synth-laden brilliance of “Borderline”. If anyone is even mildly put off by Madonna due to her public image (and believe me, a lot of those people exist), I’m pretty certain that a quick listen to “Borderline” is sure to shut them up. Hidden among the bubbly keyboards and uptempo, danceable pace, Madonna sings about a romantic relationship that remains unfulfilled, possibly teetering at the edge of total destruction (“Something in the way you love me won’t let me be / I don’t want to be your prisoner, so baby, won’t you set me free”). While this seems like a simple dance-pop song on the surface, the power with which she sings her lines make it evident that something a bit more unseemly lies below this cover. This is further helped by the gorgeous melody, which definitely seem like they would translate just as well – if not better – in a rendition of a slower tempo, with more opportunities to really squeeze out the adversity of the narrative.

There is a famous quote, often attributed to Charlie Chaplin, that states something like, “Life is a tragedy when seen in close-up, but a comedy in long-shot”. While the metaphor is referencing cinema and how it connects to real life, perhaps this could apply to pop music as well. Behind every poppy dance song is an individual with even deeper rooted, repressed problems; behind every happy-go-lucky love song is the pained reality that the good times probably will never last forever (take a listen to The Trammps’ “Disco Inferno” for a great example of the latter). Here, there are hints of glamor in the situation presented in “Borderline”, but they are often subset by a cynical reality (“When you hold me in your arms, you love me ’til I just can’t see… But then you let me down”). The beauty of this song is just so understated, and I wish there were more people who saw it this way as well. Nonetheless, by lieu of Madonna being a woman in the pop industry, many serious music fans often stop short at completely acknowledging her artistry and importance. As for me – I’ll give this one another two or ten spins.

Like Loading...
This entry was posted in Uncategorized and tagged 1980's, 1983, Madonna, One Random Single a Day. Bookmark the permalink.