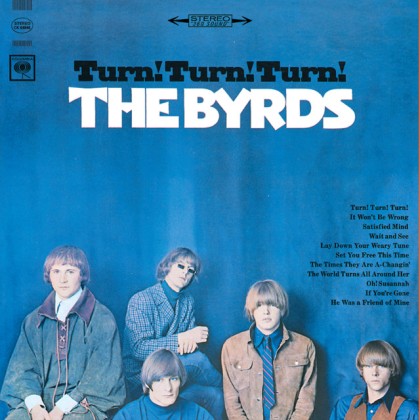 And here we are again, covering another one of the big ones. Okay, it’s true that even though The Byrds found themselves caught up in the splendorous wave of creative, innovative rock ‘n’ roll that made up the American 1960s pop music era, they never quite made it to long-standing superstardom the way that their contemporaries The Beatles and Rolling Stones did. Nonetheless, I think that even though “Turn! Turn! Turn! (To Everything There is a Season)” doesn’t exactly see eye-to-eye with “Can’t Buy Me Love” on the level of commercial appeal and influence, it does – to me at least – represent a crucial kind of sound that defines the direction that 60s pop music had been heading for a while.

The background to this particular record is probably one of the most interesting I’ve come across in this challenge so far. The origins of this song go back the furthest of pretty much every other record I’ve ever encountered – specifically from the biblical book of Ecclesiastes, from a passage that dates somewhere between the 3rd and 10th centuries BC. While nearly every line of the song is lifted directly from this passage, the arrangement we know and love today was composed by legendary songwriter and activist Pete Seeger sometime in the late 50s. The first recorded version of this song, simply titled “To Everything There is a Season”, came from the folk group The Limeliters in 1962. Roger McGuinn, previously a backing musician for The Limeliters, would go on to help form The Byrds the following year… you can probably see where this is going.

The folk rock version of this time was soon adapted by The Byrds in 1965, as a sort of follow-up to their previous number-one single, a psychedelic cover of Bob Dylan’s “Mr. Tambourine Man”. While “Mr. Tambourine Man” reached number one for one week earlier that summer, “Turn! Turn! Turn!” would prove to become an even greater success for The Byrds, topping the charts for three straight weeks in the winter of ’65. It’s undoubtedly of no great coincidence that it would achieve this feat during a time when the escalation of the Vietnam war became increasingly relevant, complete with mounting tensions over the US involvement in the war. There are a number of elements to this record that really make it stick, but one of the most crucial is that titular hook. Indeed, it was Seeger’s arrangement of this composition that introduced the “turn, turn, turn”  that is so crucial to this song’s longevity. While the simple phrase could have been the chorus of a dance craze song just five years earlier, here it calls for something a bit more meaningful, namely a turning of the world’s negative forces.

In following very closely with the original text as content for its lyrics, “Turn! Turn! Turn!”, as a result, feels very traditional and folksy in general appearance. With its subversion of the typical verse-chorus-verse narrative, each line of the song seem to flow in and out of each other seamlessly. While anchored to its overarching moral (‘To everything… there is a season… and a time to every purpose under heaven”), the lyrics also rely on a series of dichotomies to further amplify this general sentiment and how it relates to the world around us. Where there is a “time to be born”, there is also “a time to die”; where there is a “time to cast away stones”, it is also vital to “gather stones together”. Besides the repetition of its chorus, there is only one other line that repeats itself through the course of the song: “a time for peace”. Furthermore, it is notable that when it is repeated, it is at the end of the final verse, followed by “I swear it’s not too late”, the only other original line from Seeger. This really nails in the immediacy with which communities and individuals must organize to create some real, concrete changes in the world around us.

The jangly, psychedelic guitars revered in The Byrds’ cover of “Mr. Tambourine Man” make their return here, and frankly I find them to be much sharper and resilient in this particular recording. Also just like “Tambourine”, the group employs excellent use of their signature vocal harmonies, which are just so sumptuous and beautiful here. Overall, though, it’s remarkably telling just how relevant a song with lyrics such as these remains to be in today’s social and political climate – especially considering that its lyrics span over two millenniums! It is one of the numerous pleas for peace and tolerance that popped up in popular music during these tumultuous times, and it’s probably one of the best. I may not be the biggest fan of The Byrds overall, but there’s no denying the emotional elasticity within the confines of this record that permeate through each and every listen.

Like Loading...
This entry was posted in Uncategorized and tagged 1965, Every Hot 100 Number One, The Byrds. Bookmark the permalink.