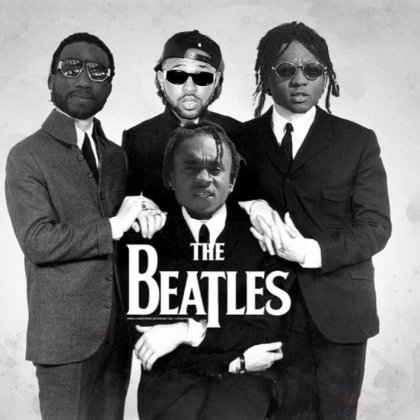 As of this writing, this song is the newest number-one single that I have come across in my Every Hot 100 Number-One Single challenge. It’s so new that it not only made my list of the best hit singles from last year, but also ranked all the way up to #19 for the recently-posted year-end list of 2017 (even though only one of its seven weeks at number-one actually took place in 2017). So yes, since it does occupy a spot in the aforementioned personal 2016 list, it’s undoubtedly clear that I’m fond of this one.

I’ve already written a few brief lines of why I enjoy this song in the link above and I’ll go into these reasons in a tad more detail later – but first, some details on the artist. Rae Sremmurd is a rap duo that consists of two young brothers, who go by the stage names Swae Lee and Slim Jxmmi. After some initial underground buzz, they signed with producer Mike Will Made It’s Ear Drummers Records in 2013 at ages 22 and 20 respectively. They gained an even wider reputation with their debut album SremmLife, which features the hit singles “No Type”, “Throw Sum Mo”, and “No Flex Zone”, the latter of which went viral in 2014 and contributed largely to their growing popularity. After much anticipation, they released their second album SremmLife 2 in the summer of 2016. Their first single “By Chance” failed to take off, but after the moderate success of their second single “Look Alive”, the group really begun to make waves with their chart-topping “Black Beatles”. This achievement granted the first number-one single to not only Rae Sremmurd, but also upcoming producer Mike Will Made It and trap rap pioneer Gucci Mane, who is featured as guest vocalist.

Much like the name “Beatles” itself is mostly derived from a bad pun, “Black Beatles” itself is an equally as effortless play on words. A black beetle is a dark-colored insect much the same way that Rae Sremmurd (and Mike Will and Gucci Mane) are Black folks who are on relatively equal footing with the hugely influential band… or so they say. As ludicrous as this comparison may seem to some, it did grant us the hilarious single cover art as shown above, and I think that’s the one positive attribute of this song that all pop music lovers could all agree upon. Still, the hugeness of this track – at least in relation to the pop scene of 2016 – could not be overemphasized. Its peak position replaced “Closer” by The Chainsmokers and Halsey, which topped the charts for an impressive 12 weeks prior. Anyone who was alive in the spring of 2016 and even mildly familiar with the pop charts should undoubtedly recognize the unbeatable juggernaut that was “Closer”… yet “Black Beatles” managed to knock them off.

Now, although I have only been close-listening to pop music for the past couple years or so, I do know that recent years have found this music ostensibly tied rather closely with social media. This probably truly began with DJ and producer Baauer’s 2012 single “Harlem Shake”, which reached #1 for five weeks in the US after a YouTube trend led to the song becoming a meme, which spiked its streaming numbers. Since then, a number of other hit singles have had social media trends at least somewhat to thank for their surprise success, including PSY’s “Gangnam Style”, Ylvis’s “The Fox”, T-Wayne’s “Nasty Freestyle”, and Silentó’s “Watch Me”. It would only make sense, then, that Rae Sremmurd (who were coming into prosperity when most of the aforementioned singles were making their mark) found their own song skyrocketing to the top thanks to the viral Mannequin Challenge trend, which mainly showcased on Vine. In case you are unfamiliar with the challenge (or have forgotten about it by now), here is Rae Sremmurd themselves organizing a version of the trend while on tour.

But looking forward, this song definitely sets itself apart from those other social media-trending songs in one major way: those other songs are bad, and “Black Beatles” is good! To put it more specifically, the praises that I initially granted this song (its youthful vibes, catchy rhythms, sharp production, and fun performances) remain true here after countless relistens, while “The Fox” and “Watch Me” simply got old very, very, very quickly. To remain on topic, though, I couldn’t really elaborate on the song’s positive attributes when I first wrote about it a year ago – outside of noting its “distinct personality” – but I think it’s now finally clear as crystal. The lyrics of the song are replete with some of the most distinct imagery of the year: “Quick release the cash, watch it fall slowly”, “Rockin’ John Lennon lenses; like to see ’em spread-eagle / Took a bitch to the club and let her party on the table / Screamin’ ‘Everybody’s famous'”… and those are just some examples from the start of the song. Yes, it’s hedonistic, and yes, the Beatles comparison is banal at best, stupid at worse. But we can all use some carefree party jams every once in a while, and this one is one of the better ones of recent years.

But let’s be real. Although the performers are apt to compare themselves to the famous Fab Four, this track genuinely belongs to two people: Swae Lee and Mike Will Made It. Mike’s production, from start to finish, is laden with dark, druggy atmosphere that gives off this awesomely hypnotic vibe that makes the whole track closer to cloud rap than trap. It seems to reverberate in the brain long after the song has completed, and somehow feels as eerie as it does joyful, to equal success. This couples astoundingly well with Swae’s youthful melodies in the chorus and verses that are just so damn infectious. Even in the early day’s of this song’s upward movement, the first line of the hook – “That girl is a real crowd-pleaser…” – already seemed as ingrained in pop culture as first few seconds of “Can’t Buy Me Love”, for example. True, it’s all a hedonistic swamp of brag-rap with little meaning beyond what’s already laid out (“Smoke in the air, binge-drinking”), but when Gucci Mane’s part seems devoid of substance in comparison, it’s hard to deny that there’s something special in the chemistry between the singer/rapper and producer that just can’t be bested.

With this particular track, at least, Swae and Mike are the John Lennon and Paul McCartney of the gang. Though I fear that stretching this comparison would give a rude disservice to Slim Jxmmi, without whom Rae Sremmurd would truly be incomplete. Even though his solo verse here is the most clumsily in transition, a bit jagged around the edges, and contains a couple of the song’s worst lines (“Black Beatle, bitch, me and Paul McCartney related”), it also adds the much needed punch in the gut for this song to truly head off with a bang, with fingers eagerly reaching for the replay button. Slim is underrated in that respect… which I guess makes him the George of the group. And, by extension, Gucci Mane is Ringo. Yeah, I’m feeling pretty satisfied with this comparison.

Like Loading...
This entry was posted in Uncategorized and tagged 2016, Every Hot 100 Number One, Gucci Mane, Rae Sremmurd. Bookmark the permalink.