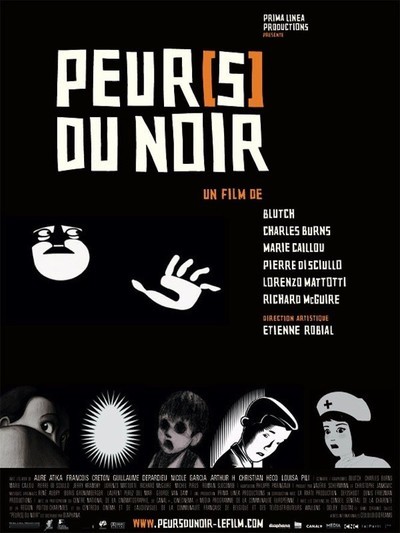 Being a lover of animation and wanting to delve more into French animation works, which have always seemed particularly creative and outgoing in comparison to their American counterparts, this film has been on my radar for quite a while now. I decided to give this anthology a watch today when I found out it was on Hulu – and that it also featured a female director, something that is almost unheard of in animated feature films. Along with the fact that this pretty much doubles as a horror film (a genre I absolutely love), I was honestly going into this with high hopes.

These hopes, unfortunately, where crushed when I soon realized the kind of film I would be dealing with here. As the title indicates, the main theme that connects each of these stories together is fear. Various horrors, some realistic but most supernatural, play some role in the conflicts of each of the narratives… of which there are about five-and-a-half. The half being the connecting narration by Nicole Garcia, interspersed in between each of the stories and set to the tune of a variety of abstract shapes and figures. These parts are the least impacting of the whole film, as the non-character narrator does little more than muse on their fears of topics are relatively innocuous as politics and indigestion.

Well, at least they are innocuous in comparison to what the other stories have up their sleeves. Simply put, the shorts deal with aspects as varied as insect indoctrination, childhood bullying reflected in one’s nightmares, rabid dogs controlled by a malevolent owner, violent and mysterious deaths by beast, and a creepy house with deep, dark secrets. For the most part, each of these stories seem to come up pretty short, beginning with a pretty interesting concept that ultimately falls flat as each of the creators seem to scramble for a fitting conclusion. The entirety of Fear(s) in the Dark is filmed in black & white; this aspect, along with the blocky minimalism of Charles Burns’s segment, brings to mind Marjane Satrapi’s Persepolis, released this same year. Unlike Persepolis, though, the style doesn’t quite connect to the narrative or thematic material at all, other than by reinforcing a vague sense of dread and darkness that often comes with fear.

And it is Charles Burns’s segment that probably leaves the most lasting impression – although not necessarily for the best reasons. I recognized Burns name from reading his brilliantly bizarre graphic novel Black Hole a couple years back, and the story behind this segment (an introverted man falls in love with a woman who slowly reveals herself to be an obsessive beetle-person… or something) seemed compelling enough. Unfortunately, the entire story is littered with exactly the type of male gazey love fantasy that I hate so, so much, particularly one steeped in a bizarre rape culture. And the half-baked quality of the film as a whole is totally present here: there are instances where the narrative mirrors Barbara Creed’s concept of the “monstrous feminine”, and if the story were to take some time to develop the female character here, there could have been something pretty interesting! But alas, there is not.

As a whole, though, this film is way too cluttered to be enjoyable. As opposed to other anthology films that would show the entire short story before moving on to the next one, this one weaved parts of each story in and around each of the others. This makes for a viewing experience that never quite takes off, since the attention is demanded to be on numerous points all at once. There’s no time to breathe because the film is riddled with a sense of incompletion throughout its entirety – and that’s not good! Additionally, I really don’t feel like the animation is very satisfying either. It’s not surprising to hear that each of these directors are primarily comic book artists and graphic designers, because I feel like this would be much more fitting as a graphic novel or even a one-off series. I’m unsure if it would be a good one, but at least the segment directed by Marie Caillou (the one dealing with a Japanese schoolgirl tormented by night terrors) would make for something interesting… or at least something with potential.