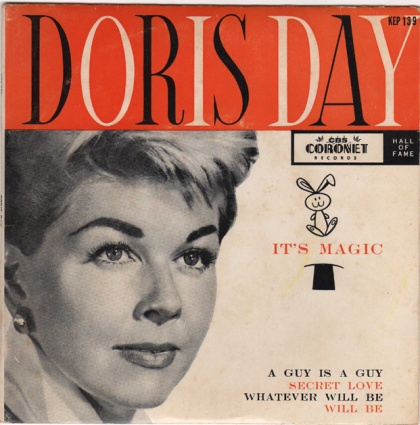 I’m always excited to come across the pre-Hot 100 singles on this Every Number-One Single challenge, as I was with “Maria Elena”, “Oh! What It Seemed To Be”, and especially “(We’re Gonna) Rock Around the Clock”. This specific song, on the other hand… not really. For one thing, I’m already not too big of a fan of Doris Day, whose style of singing always came off as too white-bread and drab for my liking. Additionally, while I was not at all familiar to this song prior to this review, I could already tell from its title that it most likely would not be the one for me…

Standard to how these reviews go, though, I’ll give a little big of background on the song in question today. The author of this song as Day sings it is Oscar Brand, a legendary musician who is probably best known for his catchy folk songs of the 60s and 70s. I actually just learned while researching this song that Brand had just recently passed away, at the ripe old age of ninety-six! Just an interesting bit of trivia.

It should be noted, though, that the melody and basic structure of this song had existed well before this recording. Back then, it was a pub song popular among WWII soldiers titled “A Gob is a Slob”. Brand himself even recorded a version of this in 1955, a few years after he rewrote the lyrics for Doris Day’s version. My curiosity undoubtedly got the best of me, so I sought it out and… well, yeah, it’s pretty disgusting. It pretty explicitly details an account of a woman being followed by a stranger into her house and into her bed, without there being any indication of her consenting to this interaction. In fact, she even states that she “would have said ‘please leave this bed’, but who the hell is built that way?”. At the end, it’s revealed that she had a child, with strong implications that it is also her rapist’s child – just adding even more levels of repugnancy atop an already truly reprehensible song.

In no way in this song is the female protagonist ever given a chance at agency or a way out of this situation; the popularity of this song amongst its demographic shines a light on both society’s view of women as meek, helpless creatures as well as the military’s inherently patriarchal structure itself. In numerous places online, it was stated that Oscar Brand had “cleaned up” the lyrics to make them suitable for Doris Day. I would have to disagree and say that he didn’t so much clean them up as much as he simply made them radio-friendly. The story at the core of this song is still there: a boy follows a girl home, he insists on physical shows of attraction unwanted by her, and a happy end is deceptively forced into the end of the song. The only difference here is “a gob is a slob” is replaced by a vaguer (but somehow more distasteful) “a guy is a guy”, and the more risqué mentions of sex and babies are replaced by kisses and marriage. Joy!

Additionally, Doris Day’s recording leaves behind its folk roots and aims for more of a traditional pop atmosphere, the likes of which were at the height of their popularity in the time before the rock ‘n’ roll boom. To be honest, though, this only makes it worse. Day, as I mentioned, is a pretty innocuous singer, whose voice is very easy on the ears, but in a way that leaves little to no impact from song to song. The cutesy melody sung throughout this track needs little more vocal acrobats than a standard nursery rhyme, and I think the vaguely innocent vibe of this song only adds to the overarching message that women are coy and submissive to the demands and wants of their male counterparts. I could’ve possibly hated this less had it been a situation between two young lovers already going steady (as I assumed the first time I gave it a listen), but she clearly states that she “never saw this guy before”.

Tying all these discomforting verses is, of course, that titular phrase: “A guy is a guy wherever he may be / So listen and I’ll tell you what this fella did to me”. This fares dangerously close to the “boys will be boys” mentality that excuses men from consequence over kissing a girl without her permission and other forms of harassment and assault. Moreover, Day repeatedly mention that she is a “good girl”; everything that happens is done to her, and she allows it to happen because she is good and remaining submissive is what good girls do.

I should probably put forth the reminder that this is a number-one single – it maintained a pretty high level of popularity across the country for at least a week, but most likely for much longer. I guess we should be fortunate that we live in a day and age wherein a song like this put out by one of the country’s most prominent performers would immediately get the backlash it deserves. It should also be noted that 1952 really wasn’t that long ago – the mentality by which this song is constructed remains all the more relevant today. Let’s take the atrocity of this song as a humbling experience: a look back into how bad things were for women in the past, how many strides we’ve taken forward since, and how we must never allow this to happen again.

Like Loading...
This entry was posted in Uncategorized and tagged 1952, Doris Day, Every Hot 100 Number One. Bookmark the permalink.