It is now about ten days until the Oscars ceremony and I haven’t completed quite enough of these Oscars Thoughts posts as I wanted to! I partially place the blame on my sudden need to plow through my overview of the top 100 songs of 1984 – but really, there just isn’t ever enough time in the world to do everything I want. No matter, though!

Every year, I try to watch through the Oscar-nominated live action and animated shorts (sadly, I could never. ever get around to the documentary shorts). While often mixed in terms of quality, it’s always loads of fun discovering what are often considered among the best of the year. How did this year’s nominated live action shorts measure up? Read below and find out!

Undoubtedly, this particular short film is the one, out of the five nominated, that garnered the most reactions and after-screening discussions. Based off of an actual 911 emergency call, it details a horrifying predicament wherein a gunman enters the front office of an elementary school, and an employee talks him into surrendering himself to authorities with patience and compassion, with no one harmed in the end. The basic narrative is tragically very relevant, and the film’s greatest strength lies in its hopefulness that so many of these shooting incidents could end with much different results than they often do. Unfortunately, I think it is also in danger of (unintentionally) painting a false equivalency with countless other predicaments and assuming they all could end just as peacefully. We shouldn’t expect all victims of similar situations to willingly risk their lives in an attempt to achieve mutual empathy with their attacker, which may never actually come. Nonetheless, it’s a nice story and an inspiring one at that.

This year, the nominated live action shorts were mostly pretty bleak and depressing in content, so it is pretty nice to have a bit of humor thrown in for good measure. In The Eleven O’Clock, a psychiatrist finds himself wrapped in a session with a patient who suffers from the delusion that he is a psychiatrist. Through a series of numerous misunderstandings, the battle ensues between the two of them wherein one is fully convinced he is the doctor and the other is the patient. Even more impressively, though, the lines between fiction and reality become blurred indistinguishably and after a while, I don’t even know what to believe anymore! This is predictably hilarious, and the whole thing plays off like some sort of madcap Monty Python sketch. Yet, like even the best Monty Python sketches, the joke turns a bit stale pretty quickly and just generally leaves less of an impact than preferred. Still, for what it is, it is pretty well-done and worth a single, solitary viewing. 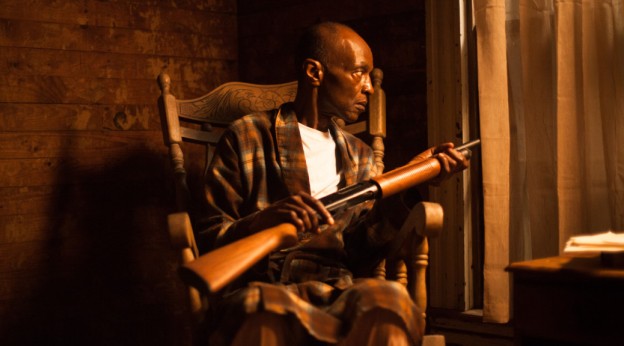 The racist lynching of fourteen-year-old Emmett Till is one of the most disgraceful events of our country’s recent history. With My Nephew Emmett, the events of that fateful day are told through the eyes of his uncle, played magnificently by L.B. Williams. Visually speaking, this film is the best shot of all five nominees, each shot filling the frame with foreboding light and rich darkness. The emotions in this film are raw, real, and absolutely incredible. One complaint I do have is with the actor they chose to play the titular Emmett Till, who is very obviously in his mid- or even late-twenties. Too often, Black boys are robbed of a childhood by white folks who disproportionately treat them like adult criminals whereas white boys (and even young men) often get away with much more for reason of their youth. Casting an actor closer to the age of fourteen would much more effectively get across the senselessness of this child’s murder. Relatively speaking, though, these complaints are minor, and the best parts of this film are more effective than the rest of the list.

Out of these five films, this one has attained the most nominations and wins across the festival circuit; thus, it is undoubtedly a favorite to win the Oscar this year. For what it is, though, it’s quite alright. It tells the story of a social worker who begins working with a family’s six-year-old daughter, who is deaf. As she teaches her sign language, the two share an immediately close bond that is tried by her parents’ reluctance with the language. I really love the decision to include subtitles to every part of the film, not just the signed parts, despite the whole rest of the film being in English. It suggested a sensitivity and awareness of deaf/hard-of-hearing folks who should definitely be part of its target audience. It’s shot nicely and the story is paced well, but it generally felt to be lacking in complete cohesion, especially since it ends right when the the story is about to get really interesting, relaying its message of inclusiveness to its audience rather literally. Nonetheless, its themes are pretty important and I’m definitely glad it exists.

Watu Wote: All of Us

Every year, there always seems to be a nominated short film with politics that lie mostly on the tired liberal tendencies that are just so generic and Oscar-bait. Regrettably, this year’s short to fall in this category is also the only short directed by a woman. It reenacts the true story of how traveling Muslims and Christians in Kenya acted in a brief, refreshing moment of solidarity when their bus is attacked by a militant terrorist group. Specifically, it follows a Christian woman who learns to think outside of her instilled prejudice toward Muslims and becomes a better person in the end. And this is where my initial problem lies: I feel that having a Christian as a main character, someone to sympathize with, does little to challenge the commonly-held assumption that Islam is an inherently violent, backwards religion. Sure, this is based on a true story and I assume that this narrative is closer to reality than the contrary. It’s well-acted and objectively well-made, but it’s also just not very challenging and follows the same beats and patterns that it’s expected to go. I wish I liked this one more… but alas.

As I mentioned before, I think The Silent Child has this one in the bag. It’s simply the most crowd-pleasing entry here, dealing with real-world issues that don’t come off as too grim or challenging (like My Nephew Emmett or Dekalb Elementary), while also containing heartwarming moments and a soft tone overall. Plus, it’s got a child in one of the most important roles in the story, and films with child actors in them are huge favorites for the Best Live Action Short Film category. It just checks all the boxes!

Like Loading...
This entry was posted in Uncategorized and tagged 2017, Dekalb Elementary, My Nephew Emmett, Oscar Thoughts, The Eleven O'Clock, The Silent Child, Watu Wote: All of Us. Bookmark the permalink.