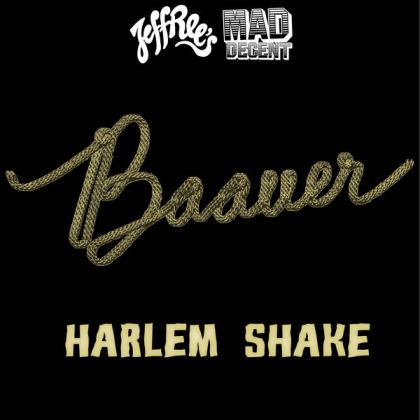 After having focused almost exclusively on rock music from the year 2000 these past few weeks, it’s about time that I turned my attention back toward this other sprawling challenge (what can I say – I like keeping busy). While a number of the artists I’ve covered on this challenge so far have fallen into that dreaded “one-hit wonder” category – notably, The Escape Club and Divine – this artist and his chart-topping track may very possibly be one of the newest entries to this club. Of course, we’ve still got to wait to see if Magic!, Omi, and/or Desiigner can shake things up with another hit on the US pop charts – but I would argue that Baauer almost certainly won’t achieve another touch of fame.

Of course, I wouldn’t be so quick to assume that this is necessarily due to lack of talent on Baauer’s part… but I’ll back up a bit. Baauer is an American producer, having produced dance music to some degree since the age of thirteen. Shortly before getting signed to the LuckyMe record label, he released his debut single “Harlem Shake” in spring of 2012. Of course, this received little to no recognition in most places initially – it’s not a song, after all, but an electronic instrumental that was meant solely for dancing to in clubs. Yet for reasons that I’m still trying to wrap my head around, this record quickly gained traction and by February 2012 made it to number-one on the H0t 100, where it stayed for five consecutive weeks. It would become the fourth biggest single of that year.

Of course, as would be the case with “Black Beatles” a few years later, this track would find its true calling in its use as – you guess it! – an internet meme. The whole “Harlem Shake” trend was sparked by YouTube personality George Miller (a.k.a. Filthy Frank, Pink Guy, joji, whatever you wanna call him), which quickly led to many others aping the challenge with their own twist. As with the “Black Beatles” challenge, the plain silliness and absurdity of the meme exceeds any attempt to explain the point – it really just has to be seen to be believed. Nonetheless, it should be emphasized that for a brief speck of time, this trend was huge. Even my own family jumped on it while the kettle was still hot – check it out, it’s cute!

As fate would have it, the rise in “Harlem Shake”‘s popularity led Billboard to amend their policies to allow YouTube streams to partially determine chart placement. It is arguably through this rule change alone that led the track to top the pop charts (being the first instrumental track to do so since Jan Hammer’s “Miami Vice Theme” from 1985) and stay there for an impressive five weeks. And to argue this point wouldn’t be without any reason – after all, there was little to no major label promotion to heighten listeners’ awareness of the track, and outside of this viral meme, the song had relatively little airplay on radio stations in general.

Of course, trying to explain the nature of the meme and how it connected with others in such a wide-spreading way would be a futile attempt. Like many memes, the point is irony, absurdity, and little else. It’s silliness for silliness’s sake – which would definitely go hand-in-hand with how silly this record sounds for many, especially those not familiar with electronic dance music (EDM). The height of “Harlem Shake”‘s hype came around the time in pop music where everything was big, bright, and danceable. Since the dawn of the 2010s, club music absolutely dominated much of the pop charts; names like Black Eyed Peas, Lady Gaga, Ke$ha, LMFAO, and others appeared near the top of the charts with rising frequency, indicating the infectious quality of dance-pop. Nonetheless, as the 2010s marched on, this trend seemed to be decidedly aimed more toward the pop side of things – big female voices and singable, anthem-like lyrics were the dominating trend, as they’ve always been.

I could go more and more into how the absurdism of YouTube culture gave a deeper connotation to the overall sound of Baauer’s track, but that would make this review longer than I think it’s worth. All you need to know right now is that internet humor often borders on the weird and satirical. “Harlem Shake” comes from an electronic subgenre known as trap, which itself is derived from popular trends of southern hip-hop (many of which can be found in today’s popular music). Baauer spent a single day in his Brooklyn apartment producing the track, after which he posted it online not thinking it would reach anywhere. And it’s plainly obvious, with the raw, unpolished format of this track (as well as the copyright infringement claims over uncleared samples that arose with the track’s exposure) that this track wasn’t manufactured to be a hit at all.

After an initial vocal sample, an electronic riff consisting of rhythmic, buzzing synth snares and hand claps builds and builds in intensity for about ten seconds. And then the breakdown occurs – “And do the Harlem shake” – wherein this same repetitive riff continues in half-time, this time with more of a snare effect and deeper pumping bass. This continues for another couple measure – with the addition of other vocal samples and… a lion’s growl? – after which the track just kind of folds upon itself again and again for another two minutes. And then it’s over. This is where the connotations of absurdity come into play and why I think this appealed to Miller and other internet pranksters. Around the peak of this track’s acclaim, music publications such as Pitchfork actually praised “Harlem Shake” for its clever integration of numerous genres of electronic music (trap, house, bass, etc.) into one singular track. I don’t know enough about modern dance music to comment much on this claim – and most people don’t either! The average listener so used to the easily consumable tracks of Katy Perry and Usher would undoubtedly find this track – filled with seemingly random sound effects and awkward tone switches – just plain odd.

And to the internet, what’s absurd is pure comedic gold. So that answers the question as to how this weird little record got famous in the first place. But honestly, when detached from time and place, it really does not hold up. Not only has the novelty of the track worn off, not just by overplay but also with elements previously unusual to the charts now a common part of the pop music lexicon… but it’s just not an enjoyable listen. The wonkiness of its sound is basic enough to be relatively consumable by a wider audience, but that leaves little room for any sense of unique craft or creativity to the mix. Most folks who have heard this song are mostly familiar with its first thirty seconds as used in the multitude of “Harlem Shake” challenge videos out there – and honestly, that’s enough. After those initial thirty seconds, the track repeats its sound effects and samples to a degree where it no longer feels fun – just plain annoying.

Nonetheless, the fact that this track alone led YouTube to become implemented into Billboard chart numbers is an absolutely game-changing move. To this day, it’s damn near impossible for a track to make it big on the pop charts without the streaming numbers to back it up. It is strange that it is this single, of all singles, that would jump in out of nowhere to shake things up in the most vital way in a long, long time. But then again, we do live in strange times… so I guess it’s pretty fitting.

Like Loading...
This entry was posted in Uncategorized and tagged 2012, Baauer, Every Hot 100 Number One. Bookmark the permalink.