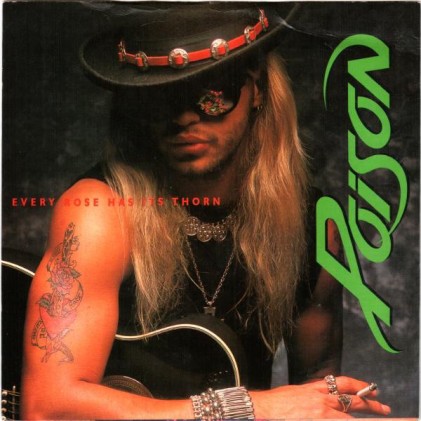 Time for yet another entry in my project to listen to and review every Hot 100 number-one single! At the rate I’m currently going, though, I doubt I’ll be able to cut my queue down to a reasonable level. It doesn’t help that I’ve also got my Rockin’ Thru the Aughts project that has unforeseeably taken top priority on my site – not to mention that I’ve also been slowly eating away at the top 100 songs of 1986! But of course, I know I have a bit of a workaholic issue. Once I began to mildly consider bringing back One Random Single a Day, I realized that it would only get more cluttered from there and quickly stopped myself. Well, as for now anyway, I’ll just keep on chugging away at this.

So in order to properly introduce “Every Rose Has Its Thorn”, one should first be introduced to the then-ubiquitous group known as Poison. Led primarily by lead guitarist C.C. Deville, bassist Bobby Dall, drummer Rikki Rockett, and the beefcake himself, vocalist Bret Michaels, Poison hit the scene right at the crux of the glam metal scene of the mid-80s. Originating primarily from Los Angeles’s Sunset Strip, glam metal characterized as rock music with the added edge of heavy metal, with catchy guitar riffs, flamboyant aesthetics (hence the ‘glam’ part of the name), and lyrics that heavy revolve around drugs, sex, and partying. In short, it’s probably the one genre that most successfully encapsulates the hedonism and excess of the Reagan era. And Poison certainly fits in these confines, first making a splash with their 1986 debut Look What the Cat Dragged In, replete with truly glamorous head shots on the album sleeve!

As for the music, though, the group picked up a following fairly quickly. Songs like “Talk Dirty to Me”, “I Want Action”, and even the power ballad “I Won’t Forget You” made their way onto the Hot 100, the first of the three reaching the top ten. These songs are pretty good definers of Poison’s music up until this point, characterized by their rip-roaring guitars and (with the exception of “Forget”) sexually-charged, pleasure-seeking vibes. It’s all about the party for these folks. And it’s all incredibly ankle-deep in its lyricism and even the overall sound – I suspect this must have been excellent background music for the hottest party in town and their onstage antics must have been something to admire all the same. But there really isn’t much else to work with there… though that’s okay if that’s what you’re into!

Arguably, the band’s second album 1988’s Open Up and Say… Ahh! would prove to be even more successful than their debut. While there are still a whole collection of party anthems ever-present here, the driving force for this album’s commercial success is “Every Rose Has Its Thorn”, which went to number-one in late 1988 and early 1989 for three weeks and was Poison’s only chart-topper. While the band had previously accomplished getting “I Won’t Forget You” into the top twenty, “Rose” was something of a different animal. In ways, the sound presented more of a watered-down version of glam metal, with an emphasis on an acoustic guitar near the front of the mix and more personalized lyrics. Of course, after the first chorus the familiar electric guitars and pounding drums come back in, but for the most part this sticks out like a sore thumb from the rest of Poison’s discography up until this point. Given that it follows a lot of traditions of the sad country ballad, I could imagine that the crossover appeal of such would’ve only helped this song’s rise to prominence.

Honestly, my favorite part of this single has nothing to do with the song itself. Rather, it’s that single, beleaguered sigh given by Bret Michaels (I assume) during the first few seconds of the track, immediately before he begins strumming his guitar. It’s almost like a warning sign, an indicator to listeners that he’s about to pour his heart out and man, is it gonna hurt. Although every member of Poison is given writing credit for this single, it might be safe to assume that this was Michaels’s conception from the start. After all, he has gone on the record by stating that this was inspired by a moment he accidentally discovered his girlfriend’s infidelity by hearing the whispering of another man in the background of a phone call. Of course, he also stated, “Now, a female voice, that I could’ve lived with… I may have even welcomed it!”… But I’ll just use that excerpt as an example of how good ol’ 80s chauvinism never quite leaves the 80s chauvinist, even in a slow, weepy ballad as this one.

But seriously, though, as lukewarm as I am on this song as a whole, there’s no denying that this is the best that Poison has ever been (and ever will be). While their uptempo party music can often peter off into a dull haze of mindless background noise, the stripped-down nature of this track comes from a place of real pain and it’s felt in every chord and every line of the lyrics. To use myself as an example – I could never see songs like “I Want Action” and “Talk Dirty To Me” as anything but pure novelty, something that I could never quite relate to but only gaze at from afar. “Every Rose Has Its Thorn”, on the other hand, has such heart-wrenching lines like, “Although we both lie close together, we’re both miles apart inside” and “Instead of making love, we both made our separate ways”, which… yeah, same. Even the part where he talks about the anguish he feels when their formerly favorite song comes on the radio accurately depicts the surreal emptiness when you realize that a piece of great media is forever changed by someone who is no longer in your life.

Not to mention that “every rose has its thorn” is just a pretty brilliant metaphor, if a bit too nihilistic for this particular situation. But overall, while the rest of the band’s efforts to keep up result in the same kinda wall of background noise they’ve emitted all this time, the efforts made in polishing up their style into something a bit more real and sophisticated are certainly seen. Given that glam metal would soon take a nosedive in popularity in the face of the grittier, bleaker style of 90s alternative rock, this isn’t a bad song to represent the genre’s final bow. Well, one of them anyway – sometime around this point, glam metal bands started releasing stripped-down ballads of their own. They got progressively cheesier and cheesier and finally just faded away. At least this is one of the more dignified ones.

Like Loading...
This entry was posted in Uncategorized and tagged 1988, Every Hot 100 Number One, Poison. Bookmark the permalink.