I guess the best way to kick off this year’s not-quite-but-almost Halloween season is to watch a couple not-quite-but-almost Halloween episodes. Gravity Falls was one of the funniest, most inventive and creative animated shows on TV during its run, and I was incredibly saddened over its ending in February 2016. I still enjoy rewatching it from time-to-time and while there are a lot of gems to its credit, “Summerween” (01×12) has always been one of my favorites.

In case you are somehow unaware of the show’s premise, I’ll explain it really quick. Basically, thirteen-year-old twin siblings Dipper and Mabel Pines are sent to spend their summer with their “Grunkle” Stan to help manage a tourist trap in a middle-of-nowhere Oregon town called Gravity Falls. Besides the colorful collection of town residents, the three also encounter a variety of ghosts, monsters, and other supernatural phenomena throughout the show’s run. To call it a Disney version of Twin Peaks, while accurate, would also be restricting the very unique personality this series possesses and consistently shows throughout its runtime. Seriously, watch this show.

Of the many eccentricities demonstrated by Gravity Falls (the town), one of them is that they love Halloween so much, they created a second version of the holiday – affectionately named “Summerween” – smack-dab in the middle of summer. It’s basically identical to its namesake, except for the fact that residents carve and light up watermelons instead of pumpkins (because it’s summer!). The plot of this episodes revolves heavily around trick-or-treating… but with a twist. Dipper, Mabel, and their friends Candy and Grenda find themselves terrorized by the urban legend fiend known as the Summerween Trickster, who insists that he’ll eat them unless they provide 500 pieces of candy for him. Additionally, Dipper is pressured into helping despite feeling too old to trick-or-treat – after all, he has to make it to a big kids’ party later on, in an attempt to impress his crush Wendy.

As a Halloween junkie, there are so many things I love about this episode. For one, this is a perfect example of how impeccably the show balances the light with the dark. One of the creepiest images in the episode involves Grunkle Stan (fake-)melting his face off a skull while screaming in horror, in an attempt to scare some trick-or-treaters. Additionally, the mere design of the Trickster is just so damn cool and genuinely frightening – he literally eats a child in his introduction! And I’ve got to give huge props to Brad Breeck, who primarily created the scores for each Gravity Falls episode but went out of his way to give this one an extra bit of Halloween sheen.

But then there’s the light. Frequently in the show, Dipper has to deal with some conflict involving an external factor in adolescence that unintentionally interferes with the relationship he has with his sister. This is done impressively well with this particular episode, especially with Mabel’s warm line in the third act about how Halloween is so much more important as one grows older, since pretty soon there won’t be any more trick-or-treating to do. Of course, this is later undercut by Grunkle Stan’s remark that Summerween is a celebration of “pure evil!!”. Of course, I wouldn’t have it any other way.

(Also! I am unsure if this was intentional, but I did draw parallels between this episode’s themes and that of the “Tricks and Treats” episode of Freaks and Geeks, in that it also deals with how the context of the holiday changes as one grows older. They also both feature Linda Cardellini, who voices Wendy! I’ll write about this one as well, when the time comes…) 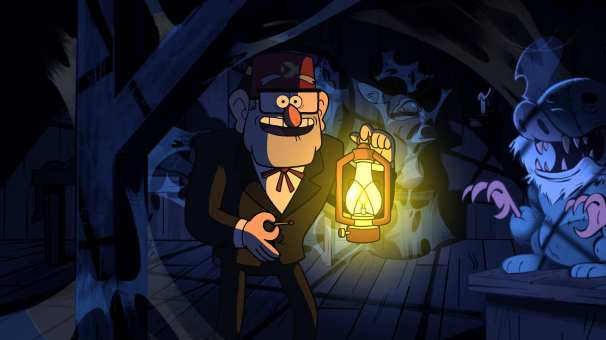 And now for the second of both Gravity Falls‘s Halloween specials… actually, this one has nothing to do with Halloween. It did premiere in October 2014, though, and retains enough spooky vibes and references to make it eligible – I make the rules! “Little Gift Shop of Horrors” (02×06) is actually one of the very few anthology episodes of the series, in a matter at least somewhat paying homage to the annual “Treehouse of Horror” episodes of The Simpsons. The anchor story shows Grunkle Stan speaking directly to the camera to a nameless first-person character whose car had broken down late at night. He attempts to persuade this person to buy something from his gift shop, telling three separate stories in the meantime. Honestly, I love the episodes where Grunkle Stan gets a large speaking role – he is one of my favorite characters of the series and creator Alex Hirsch’s voice-acting of the character is so incredibly on point.

The three stories told are as follows: “Hands Off” tells of the time when Stan steals from a witch, who curses him and has his hands removed; “Abaconings” recalls when Mabel’s pet pig Waddles accidentally eats some magical mushroom powder, which turns him into a genius; and “Clay Day” has the trio visit the home of a famous claymation animator in an attempt to have Mabel face her fears, only to find that his creations are completely sentient. For the most part, “Hands Off” is the straight-up funniest, with the beginning scene at the town swap meet possessing the most laughs per minute. Some of the best aspects of the show involve the various strange townfolk and all their unique personalities, and this short in particular gives them room to shine if only for a little bit.

“Abaconings” is significantly weaker than the other two, although this is mostly due to its tired plot. Waddles basically gets to the point where he’s so intelligent and all-knowing, he forgets that which is most important to him: Mabel. Therefore, the only direction this story can smoothly take is for Waddles to forgo it all and go back to the simple life of a pig. It’s not bad by any means, but more than anything it feels like a plot that was written to be a full-length episode, then scrapped when not enough substantial material was produced for the twenty-two-minute length.

If there’s anything that makes this episode worth the watch, though, it’s “Clay Day”. I could go on and on about what makes this segment so amazing, but I’ll keep it short here. Along with the loving homage to Harry Harryhausen and his collection of classic stop-motion creatures, this episode makes a lot of harsh digs at animators that are just plain hilarious. I’m sure these were mainly inside jokes between the show’s producers, but they make for some pretty funny moments nonetheless. This bit is primarily about Mabel’s growth, which is always refreshing to see since she’s such a wonderful character. But most importantly, the segment rides off one hugely vital truth: classic-era stop-motion animation is terrifying. To this day, I can barely watch the Abominable Snowmonster from Rudolph the Red-Nosed Reindeer without getting the heebie-jeebies.

Alright, so “Little Gift Shop of Horrors” really has nothing to do with Halloween, at the end of the day. It’s still definitely worth the watch! And “Summerween” is always around in case you’re looking for something more on the holiday side of things. And if you have never seen a single episode of Gravity Falls – first of all, how dare you? But also, “Summerween” is an excellent place to start, as it contains so much about what makes this show so wonderful and praise-worthy. The season has officially kicked off – time to keep on rollin’!

Like Loading...
This entry was posted in Uncategorized and tagged Gravity Falls, Halloween Party. Bookmark the permalink.