After visiting some stuff from my childhood, I’ve now decided to take it back a bit farther – specifically to the year I was born! 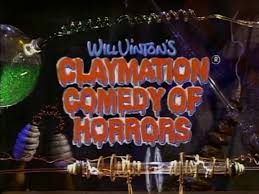 Will Vinton is a name that folks who love animation should know. He’s done a lot of influential directorial and production work throughout his illustrious career, but what he is probably most known for are his claymation works. Through his Vinton Sudios, he is primarily responsible for producing the immensely popular California Raisins commercials in the 80s and has brought this distinct animation style to works such as the feature The Adventures of Mark Twain, Michael Jackson’s “Speed Demon” music video, and numerous other projects. As you could probably guess, Vinton Studios also gave us some short TV subjects of their own creation, particularly ones of the Halloween theme. A Claymation Easter and A Claymation Christmas Celebration are among their filmography – but of course, today we’ll be talking about Claymation Comedy of Horrors.

So this fun little special starts off with a flashback over the beginning credits, wherein mad scientist Victor Frankenswine (Dr. Frankenstein in pig form, as predicted) is putting the finishing touches on his creature creation. Then we are treated to a flash-forward, on a Halloween that is still “a short time ago”, as the narrative dictates. Here we meet our protagonists, the bossy and arrogant Wilshire Pig and his meek companion Sheldon Snail. The two of them stumble across the lost diary of Dr. Frankenswine – which is actually a TV screen – stating through a psychedelic montage of images and a game show announcer voice that whoever reaches the abandoned castle by midnight will win the monster for their own possession. Luckily for the two, the map has been imprinted on Sheldon’s tongue… so off they go!

Now, already this sounds pretty crazy. Fortunately for us, the artistic animation style here is perfect for the unique brand of weirdness on display here. By virtue of its existence, claymation is already pretty awkward to the eye, with its jilted movements and blobby textures. And this particular special (animated by Teresa Drilling, who won an Emmy for her efforts) takes full advantage of the technique by crafting a series of idiosyncratic visuals through its slightly surreal storytelling. It doesn’t take long for the duo to get to the castle, and once they get there the majority of the program is punctuated by a collection of wacky moments and interactions with various undead creatures holding a Halloween party. I’m actually amazed at how many unique character designs are present throughout the short, from the green lipsticked monster who greets the two, to the long-chinned Dracula, and other multicolored, blobby monstrosities throughout. 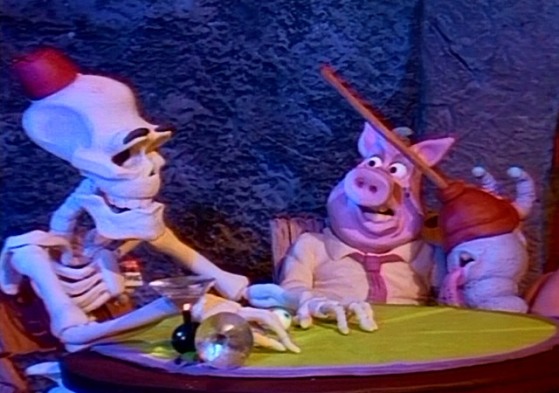 So now the main conflict is for Wilshire and Sheldon to make their way to Frankenswine’s lab without being outed as mortals. Asking for directions results in a funny joke where they are mistakenly taken to the “lavatory”, probably one of the laugh-out-loud funniest moments in the special. Another humorous moment is when they bump into the three Horsemen of the Apocalypse, whom here are written as a trio of joking, heckling gangsters. In another scene, Sheldon and Wilshire are banished to Damnation Alley – which turns out to be a bowling alley where mummies like to spend their time. Not all of these corny gags work out but they’re all good-natured and creative, and the ones that do stick are definitely effective at getting a giggle out of me.

Still, there’s a definite sense that much of this special was simply cobbled together in an attempt to make a cheap counterpart to the success of A Claymation Christmas Celebration. The animation has so much potential to look cheap and ugly, especially in retrospect, but I think it has aged considerably well and there’s a lot here that is still so enjoyable to watch. As for the substance, though, it’s clear that the story is lacking in much cohesion and the structure is basically opened up to stuff in as many cool-looking characters with little to no connective tissue. Even our protagonists leave much to be desired – Wilshire’s personality never strays beyond his bossy New Yorker stereotype and Sheldon’s purpose is never fully realized either.

But anyway, as predicted, the two eventually find their way to the abandoned laboratory. They find the monster – but discover that it is only about two inches tall. Thankfully, with the help of some magical serum, they are able to grow it to the size of a skyscraper… wherein it begins a rousing performance of “Climb Ev’ry Mountain”, for some reason. Seriously, out of all the weird instances in this half-hour special, this particular resolution remains the most bizarre to me and it might be the bit of humor that has aged the worse. But where this program severely lacks in script coherence, it makes up for it somewhat through its interesting visuals and occasional bits of dark, spooky flavor. Yeah, this is one I’m relatively lukewarm on and probably won’t be revisiting much in future years. Can’t win them all!

Like Loading...
This entry was posted in Uncategorized and tagged 1991, Claymation Comedy of Horrors, Halloween Party. Bookmark the permalink.