It is has finally come – October, the spookiest month of the year! If you’ve been following along with my Halloween TV Party, you’ll know that I’ve already been on a head start since the start of last month. I know that most folks tend to marathon horror films around this time, but I’d also like to recommend that you give a play to at least one or two Halloween specials this year. They could be as classic and beloved as It’s the Great Pumpkin, Charlie Brown and Garfield’s Halloween Adventure – or something a bit more niche. I got a lot of the less classic stuff out of the way last month (with some exceptions), and I plan on making October mostly devoted to those that have been beloved and rewatched through the years. 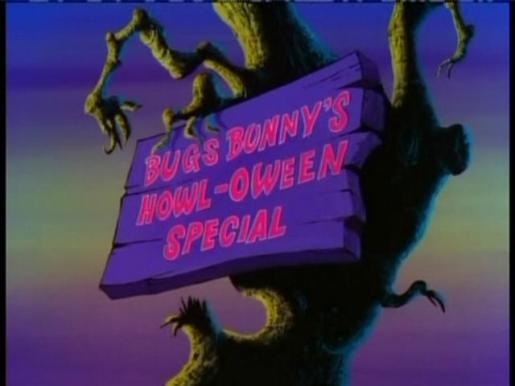 I’ll like to start off this month with a particular special that I discovered last year and found so odd and interesting, certainly enough to revisit it this year. It made its premiere on CBS a few days before Halloween on 1977. I can’t find any information of whether or not it received the rerun treatment with following Halloween seasons, but there must have been some demand – not only did Warner Bros. release it on VHS it 1994, but it also got the DVD treatment in 2010! Not too unusual considering its content… which we’ll now get into.

Bug Bunny’s Howl-oween Special begins with a youngster dressed as a witch going trick or treating – only for the house he knocks on to be greeted by the dastardly, cackling Witch Hazel! This kid is soon revealed to be Daffy Duck’s nephew, who immediately runs to his uncle and tells him about the mean witch who answered the door. Always the cynic, Daffy refuses to believe him outright, so the youngster drags him along to the house to show her himself. This narrative arc immediately switches over to Bug Bunny – also dressed as a witch – also heading over to Witch Hazel’s adobe. Mistaking him for an actual witch, she invites him in; after Bugs’s mask is removed, he grows uncomfortable being around the presence of a witch. When she invites him to stay for tea (presumably with malicious intent), he remarks that he’s heading over to get some of his Doctor’s tea, which has more “pizzazz”.

And this transitions over to a section from the preexisting film Hyde and Hare. From this point on, this Halloween special kind of goes off the rails. The majority of its content consists of famous cartoon shorts from the Looney Tunes gang (most of them from between 1954-1960), bridged together by new animation and voice acting. This leads to a pretty surreal experience, where the overarching story only kind of makes sense, getting more and more confusing the closer you look at the smaller details. For example, when Bugs mentions his Doctor, we get a cool establishing scene where Dr. Jekyll drinks his potion and transforms into the nefarious Mr. Hyde. The next scene, however, shows Bugs playing piano in the Doctor’s lab – it makes sense in Hyde and Hare, but within the context of the Howl-oween Special, it’s just random. After Bugs’s encounter with Dr. Hyde, we then cut to a chase between Sylvester and Tweety – which is the first time this whole special we are ever introduced to them! I could imagine that for very little kids this wouldn’t be much of an issue, but the narrative inconsistencies are super jarring nonetheless. 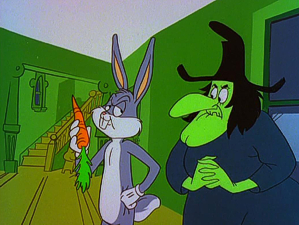 And that’s not all that’s inconsistent. As I said, this half-hour special is mostly comprised of bits and pieces from a bunch of other Looney Tunes films. Most of them are ones directed by Chuck Jones, but shorts from Friz Freleng, Robert McKimson, and others are also present. I can’t seem to find out who was behind the character animation and backgrounds of the linking segments, but boy does the difference show. Even though the parts between Bugs and Hazel only take about 20% of the runtime, the shoddy look and pacing of these parts are definitely present. Even the backgrounds and certain character traits seem really lazily done, the most glaring being how Hazel’s skin is green in some scenes and beige in others.

By contrast, in the parts from the preexisting cartoons, the animation is noticeably cleaner, the jokes hit better, and the voice acting is just better. It’s true that Mel Blanc still voices the majority of the characters here, which is a feat in and of itself. However, the twenty-year gap between the old and new bits are sadly very apparent. The 1977 version of Bugs just sounds pretty tired and wore-down, especially compared to his vibrant youth. Additionally, there’s a part of the special where we are treated to the short Claws For Alarm. Awkwardly stuffed in the center of the action is an obviously new shot of Porky Pig reading a sign that says “Room and Board”. It mostly sounds like a bad impersonation of Porky than anything else, which is just disappointing. I am pretty impressed, though, with how June Foray’s voice acting remains totally consistent and seamless between the old bits and the new parts. She always knew how to channel Witch Hazel incredibly well over the course of several decades!

If you feel like I’m avoiding crucial elements of the plot – let’s just say, there’s a reason for it. Like I said,the experience of watching this is as surreal as they come, as the story takes on a number of different narrative threads without ever tying them up in a remotely satisfying way. There’s a part where Hazel casts a spell on Speedy Gonzales turning her into her double so she can leave for Hawaii – that goes nowhere. They attempt to tie in Sylvester and Porky Pig staying at her hotel only to be terrorized by a gang of mice (the first and only time they are ever mentioned) – that goes nowhere as well. And the introductory story involving Daffy Duck and his terrified little nephew? Well, Daffy does in fact meet Hazel… who turns him into the strange polka-dotted, four-legged, flower-headed creature as seen in Duck Amuck. A pretty clever throwback, I admit – but it’s as nonsensical as the rest of them.

Eventually, Bugs and Hazel’s shenanigans get tied up on their own time, with Bugs finding Hazel’s emergency supply of magic powder and casting his own spell on her. The solution? Hazel is now an attractive female rabbit, with whom Bugs is immediately and completely smitten. Weird. But Bugs explains this with one of his signature sign-offs: “Sure, I know, but after all, who wants to be alone on Halloween?”. It might not be the least awkward conclusion, but at least that final line is pretty sick. And it would have been a satisfying conclusion, if not for the additional scene with Bugs Bunny and Witch-turned-rabbit Hazel drink stew from her cauldron, upon which Bugs turns to the camera and gives us an absolutely horrifying final grin. Happy Halloween, all!

Like Loading...
This entry was posted in Uncategorized and tagged 1977, Bugs Bunny's Howl-oween Special, Halloween Party. Bookmark the permalink.