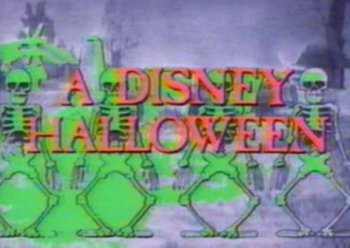 Today’s Halloween TV special requires a little bit of historical backtracking. Since 1954, Disney has produced an anthology series primarily for ABC. This series begun as an outlet for Walt Disney to branch out from film into the then-new medium of television. The first version of the series was titled Walt Disney’s Disneyland and mainly provided teasers for the different features of the titular theme park. Later the emphasis on Disneyland was lifted and this became Walt Disney Presents in 1958, Walt Disney’s Wonderful World of Color in 1961, The Wonderful World of Disney in 1969, and so on. The common thread between all of these series is that alongside whatever material the series decided to focus on, they also included related pre-produced material from the Disney name, whether it be original documentary clips, scenes from Disney films, or even movies or TV episodes shown in their entirety.

During the Wonderful World of Disney era of the show, an episode of the show titled “Disney’s Greatest Villains” was aired. In this, the Magic Mirror from Snow White and the Seven Dwarfs discusses the importance of villains in a story, demonstrated through a variety of classic bad guys and gals in Disney films. After a few more years of amendments, the series was once again renamed simply Walt Disney by 1981. One of the episodes of this version of the show was “Disney’s Halloween Treat”, which featured a variety of spooky-themed clips from Disney features and shorts, all narrated by talking jack o’ lantern voiced by Hal Douglas. Nonetheless, we’re not here to discuss either of these episodes in length – but then again, we will be talking about both, to some degree.

Eventually this anthology series went on a break between 1983 and 1986. From what I could surmise, it was during this time that it presented “A Disney Halloween” under the returning umbrella header The Wonderful World of Disney. Unlike most episodes of the anthology, which ran for thirty minutes to an hour, this particular special clocks in at ninety minutes. In order to achieve this length, it largely edits together segments from both “Disney’s Halloween Treat” and “Disney’s Greatest Villains” in order to achieve a sprawling presentation of the most morbid moments in Disney film up until that point. To be honest, though, the real reason why I am covering this longer special as opposed to the two others by themselves (other than the fact I’m essentially killing three birds with one stone) is because I couldn’t find the suitable versions of the other two versions anywhere on the internet! Further emphasizing the importance of archiving these specials for other generations to find and enjoy. 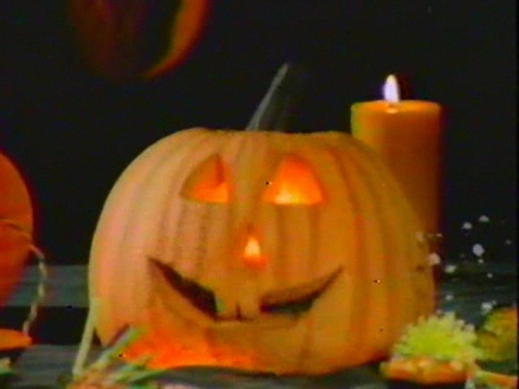 One distinct aspect of this special that does make it unique from its predecessors is its fully original introductory scene. In this, Disney CEO Michael Eisner introduces himself to home audiences, and we are delighted to see that he is joined by costumed characters Mickey and Minnie Mouse. Mickey tells Eisner that Goofy is on his way and has been working on his costume all month. After a knock on the door, in walks in… Michael Eisner? Only when he speaks, we hear Goofy’s voice come out instead! It’s truly a delightfully surreal start to the special and I wish there were more instances like this sprinkled in. Nonetheless, we are immediately treated to the “Disney’s Halloween Treat” intro sequence, which features clips from the Silly Symphonies classic The Skeleton Dance strangely tinted with orange and green. I’ve honestly grown to love the “Disney’s Halloween Treat” theme song for its doo-wop catchiness and childlike desire for something scary… but not too scary.

And that’s essentially where the rest of this special stands. While the special begins with the “Night on Bald Mountain” sequence from Fantasia, which I do find genuinely eerie, the vast majority of the scary action are really just hijinks performed by the colorful cast of innocent Disney characters. We are treated to the Wizards’ duel scene from Sword in the Stone, which is far more delightful than spooky. Donald Duck and the Gorilla is mostly just Donald Duck and his nephews pulling pranks on each other in a gorilla suit – and when an actual angry gorilla shows up, the stakes are raised only slightly higher. The “Heffalumps and Woozles” sequence from Winnie the Pooh and the Blustery Day is a bit nightmarish in its psychedelic imagery… but I can only really see very young children being very creeped out by it. On the other hand, we also get the Hell-centered climax from Pluto’s Judgment Day, which is unsettling in a, “How did this make it to a children’s cartoon?” kind of way.

But really, the second half of the special – devoted to the Disney villains – is where it gets pretty interesting. The main narrator passes the torch to the Guest of Honor, the Magic Mirror (voiced by the legendary Hans Conried) who basically uses the platform to emphasize the need for bad guys like him in a story. Unexpectedly, he can actually get a tad analytical in his musings, such as when he remarked how Captain Hook was at a large physical disadvantage from Peter Pan from the start of the duel (given he’s missing an arm and a leg). While I could do without the big portion of time given to the giant from Jack and the Beanstalk or Edgar from The Aristocats, the meditative “Trust in Me” sequence by Kaa in The Jungle Book is always a warm welcome. Moreover, the Evil Queen’s transformation scene into an old hag in Snow White and the Seven Dwarfs always gives me goosebumps and I love that they added it in full here. This segment sort of peters out by the end, with hardly any attention paid to Cruella de Ville or The Queen of Hearts, both of whom I feel are two of the most definitive villainesses of classic Disney animation! Not a good move, guys.

The special then transitions back to the Hal Douglas narrator who ends with two classic Disney shorts – Lonesome Ghosts and the Halloween classic Treat or Treat. Basically, this whole special is about what I would expect from an anthology episode of this type. I think it’s a great relic to show kids a great number of classic Disney scenes in a relatively short amount of time, which then might give them incentive to check out the full films themselves. Watching this in retrospect, the most glaring omissions are definitely moments from the Disney Renaissance such as Beauty and the Beast, The Little Mermaid, and The Lion King, which would have fit right in here. Even if you want to keep it in the 80s, there are probably a number of scenes from The Black Cauldron (despite it being a flop) that would have worked in the “scary scenes” section, whereas Ratigan from The Great Mouse Detective would have been a perfect inclusion in the villains section (Vincent Price!). Anyway, even though it’s pretty obviously dated, it’s a pleasant little relic for its time and I can definitely see how it had multiple reruns on ABC and the Disney Channel for many years afterwards.