We meet again, 1979! I already talked about in my preface for The Pumpkin Who Couldn’t Smile that 1979 seems to be the sweet spot for Halloween-themed TV specials for some strange reason. My theory seems to lie primarily on the fact that the film Halloween was released in the previous year, eventually became the tenth highest-grossing film of the year, and ignited a nationwide desire for the spooky, the eerie, and the grotesque – but family-friendly, of course! 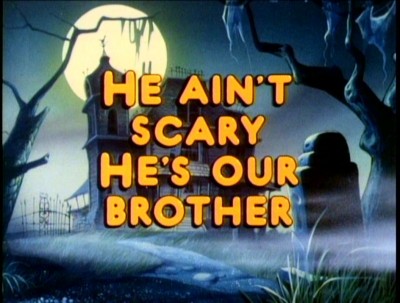 And here we have yet another 1979 Halloween special in our midst. I present, Casper’s Halloween Special… although I guess Casper Saves Halloween or He Ain’t Scary, He’s Our Brother would be acceptable titles as well, for some reason. I was actually pretty excited to watch this one, as Casper’s First Christmas is a childhood favorite of mine and while it didn’t end up making the final cut, it really warmed my heart to revisit it while compiling my Top 13 Animated Christmas Specials. Despite all this, I don’t think I ever gave a play to this Halloween special until this very day. If it’s anything like the Christmas special, I’m sure I’ll be delighted to some degree!

Okay, it’s really not too much like the Christmas special, save for some basic plot elements. For one thing, none of the other familiar Hanna-Barbera characters are present – only Casper, Hairy Scarey, Screech Ghost, and Winifred Witch. For some reason, I managed to stumble across a version of this special with the laugh track removed. While it does feel a tad unusual watching a 70s Hanna-Barbera cartoon without a laugh track, I’ve never been much a fan of them anyway so having that little distraction removed was warmly welcomed. So basically this special begins with Casper watching neighborhood children go trick or treating and lamenting over how he, a ghost, could enjoy the Halloween season as well. Suddenly he has a bright idea – a reverse of the ol’ costume protocol! He could dress himself up as a little boy and indulge in the masqueraded festivities like the rest of the living. What could possibly go wrong? 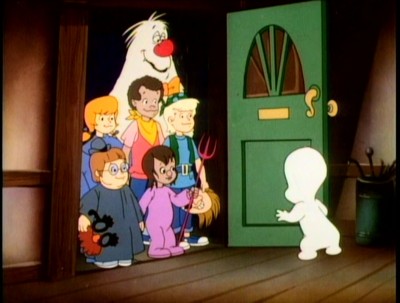 Well, soon enough, intolerance rears its ugly head in the shapes of Hairy, Screech, and Winifred, who basically try everything in their power to bully and terrorize Casper, seemingly just for kicks. They tie him up in order to prevent him from leaving while they go on their own excursion of malicious spooking, but soon enough he escapes. Sadly, Casper eventually finds that humans of the real world aren’t quite so accepting of a ghost being in their midst on Halloween night and children scream and run in fear whenever he approaches. This coupled with his mean-spirited ghostly peers leaves him heartbroken – that is, until he meets a group of orphans who accept him for who he is. This is partially because they both share the common experience of being turned away on Halloween for who they are. Clad in simple masks and hats (that was all that the orphanage budget could afford!), these five children have received an intense amount of prejudice from a number of rich households that night, one going so far as to closing the gate right in their faces. They share Casper’s pain!

Of course, not everything can go exactly as planned, as Hairy, Screech, and Winifred now turn their attention toward Casper and the kids. Not only is this just plain mean, but it also seriously interferes with the clan’s candy-getting abilities. It is from this point onward where the plot gets pretty predictable, especially for those who have already seen the Christmas special. Long story short, Hairy realizes the error of his ways, ditches his other two cohorts, and takes it upon himself to ensure that the children have a delightful Halloween. Overall, I definitely prefer the Christmas special over this one, but this also has its perks. There are a couple songs here (not enough to call this a musical special), but the only one that stuck with me was the trick or treating song, which was animated so colorfully and vibrantly, it really was an absolute delight. I don’t know why Casper continues to spend time with his ghost companions of ill intent, but I guess that’s all a product of his friendly nature. This special follows the basic moral lesson of tolerance and acceptance of others who are different, as well as highlighting our protagonists’ persistence over the obstacles that lie in their way. It’s an adorable little special – great for kids!

Like Loading...
This entry was posted in Uncategorized and tagged 1979, Casper's Halloween Special, Halloween Party. Bookmark the permalink.