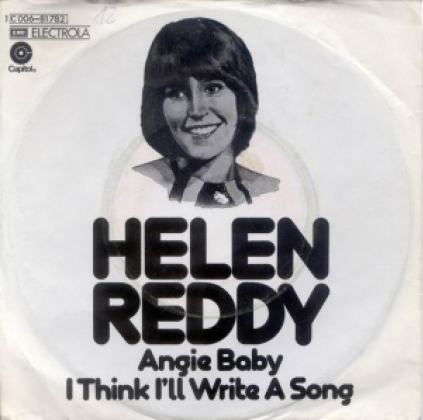 Somehow, I was expecting (and even kind of hoping) that my second entry for the Number-One Singles challenge would be something from at least somewhat of a different era from the first. Nonetheless, I’ve played my cards and it would only be fair to go with what the randomizer has given me, even though the gap between “Rhinestone Cowboy” and “Angie Baby” is a single scant year. At the very least, though, my opinion on this single stands at quite a different point in the like-dislike spectrum than that of “Rhinestone”.

Let’s back up a bit, though. “Angie Baby” marks a continuation of success for Australian adult contemporary artist Helen Reddy. This was her third and final #1 single on the Hot 100 (following 1972’s “I Am Woman” and 1973’s “Delta Dawn”). Though this single was released in late 1974, it reached the top spot for the final official week of the year, hence it’s inclusion on 1975’s year-end list. Overall, however, Reddy was hugely successful in the 70s – she achieved over a dozen top 40 hits in the Hot 100 alone, and even more when taking the adult contemporary charts into consideration. “I Am Woman” is often considered her signature song for its cultural significance during the rise of second-wave feminism; furthermore, many connect the performer herself with the movement due to her string of singles with woman protagonists or themes of female empowerment.

As a rule, I’m not the hugest fan of Helen Reddy, although mostly for aesthetic reasons than anything else. It’s clear that she has a good voice and for the most part, she demonstrates this pretty consistently throughout her most recognizable singles. Nonetheless, she is an adult contemporary artist from the 70s, a genre-decade intersection that often doesn’t fare too well to my ears (with some exception, of course). With that said, though, this is probably one of Reddy’s most interesting singles. I tend to label this song as the final part of a Southern Gothic trinity that also includes “Delta Dawn” and “Ruby Red Dress (Leave Me Alone)” (which went to #3). All three songs, to some degree, deal with the plights of a woman in a small Southern town and her interactions with the spooky, patriarchal world all around her.

To put it simply, the plot of “Angie Baby” takes a few pages from William Faulkner’s “A Rose for Emily”, although the true meaning of the tale is left intentionally vague. The titular character is a disturbed young woman who is taken out of school and spends most of her time listening to the radio. There is a brief mention of lovers who “appear in her room each night“ but disappear when “her daddy taps on her door”. Initially, this could be interpreted as rock ‘n’ roll being forbidden in her household, with the lovers being the various men (and women!) who perform her favorite music. However, it takes a bit of a surreal turn when “a neighbor boy with evil on his mind” enters her room – only to shrink smaller and smaller as Angie gradually turns down the volume of her radio! He’s mentioned thereon out as a “secret lover who keeps her satisfied”… but whether or not we’re supposed to interpret this as a literal murder or a psychedelic melding of body and machine is never really made clear.

Overall, I think the trials of interpreting this song are only slightly more interesting than the general layout of the song itself. It safely follows the trend of horror-themed story songs that were rather big in the 70s, including the #1 hits “Ode to Billie Joe” by Bobbie Gentry (1967), “The Night the Lights Went Out in Georgia” by Vicki Lawrence (1973), and to a lesser extent “Harper Valley PTA” by Jeannie C. Riley (1968). At this point, though, it really does feel like ground that has been tread upon again and again, and Reddy does little here to mark this as particularly exceptional (unlike the chilling “Billie Joe”, for example). There’s some interesting stuff going on with the music, though. The guitar lick that introduces the track punctuates the sonic format with a certain kind of ghostly eeriness, definitely heightened by the dark violins and the impressive backing vocals. Generally speaking, though, this is one of the least interesting inclusions in this Southern Gothic trend in pop music. Though well-sung and well-played, it mostly serves as a signpost of the moment in time when this specific trend really started to tire itself out.

Like Loading...
This entry was posted in Uncategorized and tagged 1974, Every Hot 100 Number One, Helen Reddy. Bookmark the permalink.