I gotta be real – for the most part in this Halloween TV Party, I intended on covering primarily animated specials. These are the stuff I grew up watching and what I most dearly connect with the holiday all the way into adulthood. I do plan on mixing it up a bit by throwing in a couple of live-action TV specials here and there (as I’m doing right now), but I just want to make this fact a bit more concrete moving forward. Okay, now that we’ve got that settled, here’s what I watched recently! The Worst Witch is a British made-for-TV film that is based off a successful series of children’s books by Jill Murphy. It aired first on HBO and then on the Disney Channel during the Halloween season, up until around 1996 – which explains how I never saw it as a kid, since I was too young to have discovered TV! As the title alludes, this film is about a young witch-in-training named Mildred (played by Fairuza Balk in only her second role since Return to Oz) who has been deemed the “worst witch” by both her peers and instructors, in a sort of proto-Harry Potter institution. The bulk of the narrative in the first half shows a number of instances wherein she struggles to keep up with other witches – mixing potions, casting spells, flying on her broomstick. To add insult to injury, even her assigned cat is a gray and white tabby instead of a black cat like the rest of her classmates, since her headmaster claims to have run out of black kittens.

Immediately, the cheapness of this film’s aesthetic is clear. While the costumes are just the right amount of garish to be more endearing than anything else, the set design is a tad more painful to look at. The flying scenes are accomplished by a tremendously gaudy green screen effect; in many of the shots, the clipping is so distractingly poor. Even more ridiculous is the decision to add voice-acting for the cats, with numerous scenes given this annoying, “meow, meow, meow” backing noise that doesn’t really work. Still, there is something pretty charming about the cheapness of this production. This is pretty much sealed sometime in the first act of the program where we see a troupe of witches cackling and plotting the downfall of the school, while singing a fun musical number dancing around a bubbling cauldron. It’s this kind of campy goodness that makes the Halloween season so great.

But let’s clear the air by mentioning what has got to be the very best thing about this special – Tim Curry as the Grand Wizard (don’t read too much into that title, please). His character is introduced as a special guest for the school’s annual Halloween fest. He isn’t in the movie for very long, but he does bring the second of the movie’s two musical numbers through what I could only describe as a 70s psychedelia music video. It’s an ungodly amount of green screen and just as cheap-looking as the previous instances of green screen – but even better. Really, this scene just has to be seen to be believed. I’m sure that if I had watched this movie at all as a youngster, I would have eaten up these visuals and the accompanying song as well!

As for the non-campy parts of this special… well, there aren’t too many. But it’s comforting to see that Fairuza Balk demonstrates an impressive amount of vulnerability and range at such a young age. It soon becomes clear that much of Mildred’s failures are actually a result of senseless bullying by fellow classmate Ethel, and the special becomes more of a tale of how Mildred can rise above this while also finding her place in the world. It’s quite a pleasant, wholesome adolescent tale, while having enough of the spooky Halloween aesthetic to keep things interesting. It’s one I’d surely recommend to any young witch who hasn’t yet uncovered this magical treat. Bonus points as well for Charlotte Rae playing two entirely different (twin) witches with unique looks and personalities – and playing them both super convincingly! 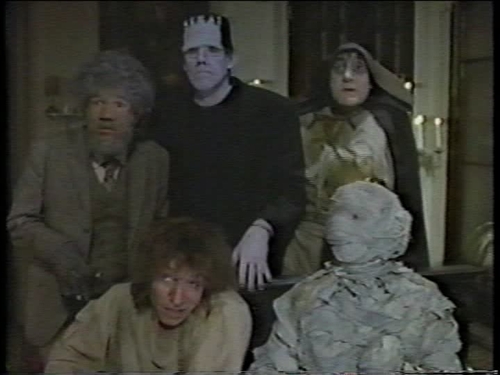 And now for the second special of the day, 1979’s The Halloween That Almost Wasn’t. I see this one often on lists of the greatest classic Halloween specials, though I never watched this one myself until last year. Like The Worst Witch, this aired seasonly on the Disney Channel until 1996; on the year of its first airing, it even won an Emmy! It concerns the infamous Count Dracula being jarred by rumors of Halloween potentially coming to an end, after which he bands together a group of the world’s most famous monsters and spooky figures to settle the matter. It soon becomes clear that the Witch had initially sparked the rumor, sick of how demeaned she feels each year, and writes up a list of demands Dracula must follow in order for her to comply and Halloween to continue to exist.

I gotta be honest: although I know this special is beloved by many, it’s really hard for me to get into. First of all, these costumes and sets are hilariously cheap – yes, even cheaper than The Worst Witch! Although seeing that this is a comedy and there are few things funnier than grown adults acting completely earnestly in garish Halloween costumes… I guess it succeeds there. Secondly, though, the humor of this special relies primarily on flimsy one-liners and slapstick gags – including the ol’ Scooby-Doo doors effect. I think there’s something to be made of the fact that these monsters feel that the new generation no longer fears them and the ridiculous humor sort of plays upon this… but I just don’t find much of it very funny. And I’m sure that this itself is the way time has aged such humor, but on its own it tends to move at a snail’s pace.

Overall, not a whole lot happens in this special. Just a bunch of shenanigans, with a final, heartwarming resolution that conveniently ties everything up. I will admit that I enjoyed this special more with this second viewing than I did with the first last year, so maybe that means I’ll come around to it with subsequent viewings? Bah, who knows. Oh, by the way, this particular Halloween special ends with a totally random disco party over the end credits, which is the most 1979 thing about it! That alone makes it well worth your time, I think.

Like Loading...
This entry was posted in Uncategorized and tagged 1979, 1986, Halloween Party, The Halloween That Almost Wasn't, The Worst Witch. Bookmark the permalink.