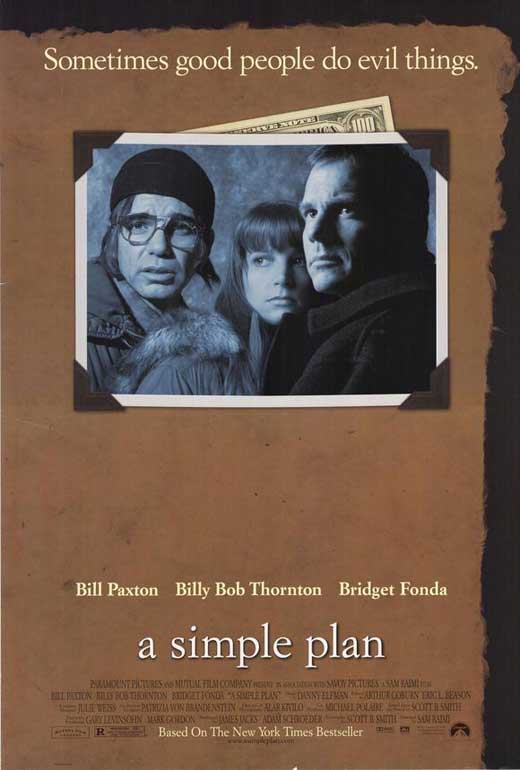 While I am not quite as enamored with Sam Raimi as I used to be, there was a time a few years ago where I absolutely ate up his style. The first Evil Dead film remains one of my favorite horror films ever and even his lesser regarded films like Darkman and the Spider-Man series emit traces of his imaginative weirdness. Nonetheless, his 1998 film A Simple Plan has been a blind spot for me for years – mainly due to many people informing me that this was very unlike the style that I was used to from Raimi. Still, it always seemed like an at least halfway decent crime drama, which is enough to pique my interest enough to finally get around to the damn thing.

In A Simple Plan, the setting is the rural parts of Minnesota, the areas where education is poor, dead-end jobs are replete, and trips out to the next town over could take an entire day. To make things worse, it’s right in the middle of winter, where this already desolate wasteland is covered with a thick blanket of snow, making every square mile identical to one another and any sign of escape futile. Nonetheless, a sign of escape does arrive for Hank Mitchell, his brother Jacob, and their friend Lou when they arrive upon a crashed plane holding over $4 million. They decide to keep the money hidden until the end of winter, upon which they will divide it evenly… and, as expected, it doesn’t turn out as well as they planned. From this setup alone, one could guess that this would follow the tried-and-true fiction trope of one’s ambition and greed leading to disastrous results, up to and including violence and death.

And one would be correct! Through its simplistic narrative structure and blatantly character-driven storytelling, this film pretty much gives a good sense of its trajectory from the get-go. Immediately notable is just how restrained this style is for Raimi. Apart from a few moments of intense violence (including a crow attack done with animatronics – exciting!), this contains little of the stylistic touches by which Raimi has made a name for himself. Nonetheless, upon accepting that not every film needs to carry with it the responsibility of groundbreaking innovation, its interesting to see a filmmaker with such a prominent voice tone himself down just enough to create something as straight-forward yet compelling as this. While this sense of predictability could’ve very well been to its detriment, fortunately in this case, it means that we already know the ending, so best to enjoy the ride for what its worth.

Of course, predictable does in no way immediately translate to uneventful. Our protagonist is played brilliantly by Bill Paxton, in a career-best performance as an average joe who must suddenly grapple with his moral compass. Though he is introduced as a decent guy at the core, with a good education and a stable job, the occurrence of this money gives him a chance to buy a better life for his pregnant wife (played by Bridget Fonda) and their unborn child. While the sets and photography instantly bring to mind the Coen masterpiece Fargo, also like Fargo this film places ordinary men in a tough situation that is simply way over their heads. With the case of Paxton’s Hank Mitchell, his own trajectory is one of an ordinary man who soon finds he is capable of some truly gruesome, immoral acts.

What is truly impressive about these performances, though, is how they play upon one another. I was initially turned off by Billy Bob Thornton’s portrayal as Jacob Mitchell, a man who clearly has a learning disability. In the early parts of the film, it seems that the script plays off of this comedic timing that pokes fun at this aspect of his character, which seemed unnecessarily cruel and in bad taste. Nonetheless, the interactions between Paxton and Thornton in the latter parts of the film remain some of the most substantial moments of the film as a whole. Each actor carries with them so much quiet intensity that explodes only at the most vital moments; when it does, the elevated tension that makes up so much of the film’s atmosphere rises to a head and crafts some of the films finest, most compelling moments.

Overall, A Simple Plan sculpts its personality around a undulating fight over power and authority over the situation at hand. It always amazes me, with movies like these, how far the characters go to remain in control over something as trivial as money. In this case, the narrative follows along a series of hidden plans, schemes, bartering, back-stabbing, and trickery, all with the intent to somehow end up on top – whether this means to be rich or alive. The escalation into real-life violence doesn’t take long at all (the first death happens within the first third of the film) and the fact that the characters still remain jaded by their incessant greed is a sight to behold.

To finish, I would also like to mention the women of this film – namely Bridget Fonda, who surprises viewers (myself included) by revealing time and time again that she is the one who is truly in control! While Bill Paxton remains at the center of this tale from start to finish, it’s interesting how much of his actions are motivated by what his wife tells him what to do, showing that the surface-level masculinity of this film may not be quite as stable as it seems. Finally, I’d also like to mention how pleasantly surprised I was by the interesting dramatic turn from Becky Ann Baker, who I know best as Linda Cardellini’s mother from Freaks and Geeks from a couple years later. While her few scenes in this film are few and far between, it introduced to me a different dimension of her acting ability – one of raw, crude intensity, the likes of which I don’t see many older female actors attempting to such a degree. While I enjoyed this film as a whole and would definitely recommend it to fellow lovers of crime drama, it was these two performances that elevated it to something a bit more special to me, personally.

Like Loading...
This entry was posted in Uncategorized and tagged 1998, A Simple Plan, Sam Raimi. Bookmark the permalink.