Well, already on this Halloween TV project I’ve come across a couple of obstacles (both of which I basically anticipated). For one thing, many of the so-called “Halloween specials” I have lined up really have little to nothing to do with the holiday! For instance, I watched two classic half-hour ABC Weekend Specials recently (Soup and Me and Bunnicula), both of which are not only adaptations of books I grew up with, but also marketed as Halloween TV specials. Of course, neither of the two have anything to do with the holiday, save for the final third of Soup and Me which features an entire minute-and-a-half of a Halloween party scene. While it’s true that Mystery Magical Special also didn’t have much to do with Halloween, at least enough of a spooky quality was there to make it worth my energy to write about.

The other obstacle is that I’m already falling behind on my writing for this project. I guess that’s what happens when the holiday season has me watching these specials everyday, but real life doesn’t allow me the time to write about them all! So in an attempt to catch up, I’ll try to combine some reviews here and there to keep me from suffering from too much work overload. 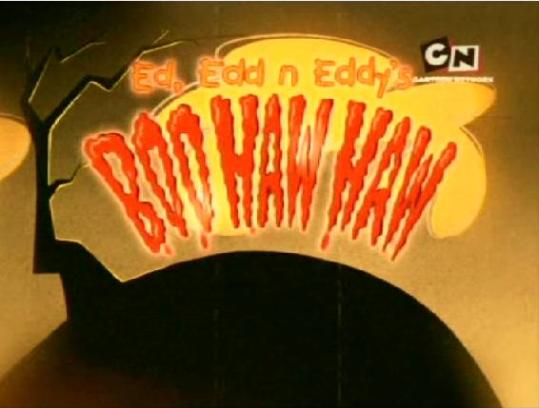 So, the first of the two I’ll talk about today is “Ed, Edd n Eddy’s Boo Haw Haw”, promoted as the sole Halloween special from the popular Cartoon Network show. While I did watch the show from time to time growing up, it never really found a place as one of my favorites; I watched it even less in later season when the animation and writing got more polished. Still, it’s always fun to jump into this one, as the antics of the titular three boys and the supporting cast of other colorful characters always felt to me to fit the Halloween aesthetic like a glove.

In this trick-or-treating adventure, the arrogant Ed has in his possession an old map given to him from his big brother which presumably leads to “Spook-E-Ville”, the neighborhood wherein loads of candy are handed out to kids who enter. Edd ( dubbed “Double D” throughout the series) is reluctant and anxious as ever about the plan, but ultimately decides to go along. Ed is fully on board as well, but as an added twist, he has been indoors watching horror movies for a straight month, which would bring about its own consequences to the hunt… 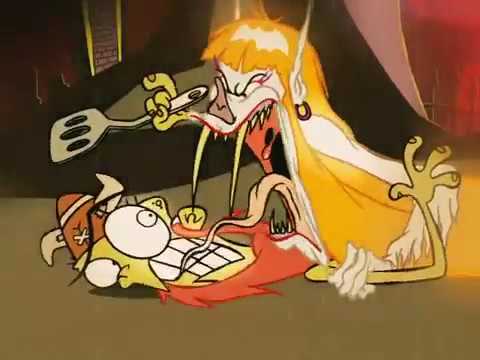 I actually watched this special for the first time last year, and enjoyed it enough to add it to my repertoire yet again. For the most part, I find the general style and aesthetic of Ed, Edd n Eddy to be well outside my tastes, but this is one of the better implementations of its general aesthetic. From the opening credits, which features a variety of cool ghost and monster imagery with an old film reel filter effect placed atop it all, it’s clear that we’re in for a treat. The twist of this whole trick-or-treatin’ tale is that Ed frequently hallucinates kids from the neighborhood as some evil, beastly creature from his horror movie binge. Immediately this might come across as some kind of meta-commentary on excessive TV/movie-watching and what effect that might have on young, growing brains especially. I don’t really buy that, personally – after a while, it becomes clear that this is just an excuse to show off some truly creepy, kind of impressive creature designs. Kevin as the Headless Horseman might be my personal favorite of the bunch.

Everything else surrounding this neat little gimmick is all basically window dressing – but enjoyable window dressing, at least. Double D’s bubonic plague costume is just great. The Gothic-architecture inspired backgrounds add a terrific spooky atmosphere to the whole episode. The voice-acting and animation are just so eccentric, energetic, and wild all around, which makes for an enjoyable cartoon period. And to top it all off, the film ends with a final, satisfying, (darkly) hilarious punchline that’s twists Ed’s new perspective into something truly unexpected. I can see myself revisiting this special for years to come – it’s just the right blend of childhood chaos and Halloween decadence, and perfect for a horror-loving person like me. 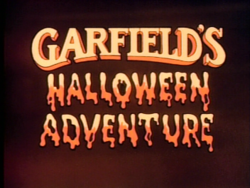 The second of these two Halloween specials of the day takes the form of Garfield’s Halloween Adventure, which first aired nearly twenty years before “Ed, Edd n Eddy’s Boo Haw Haw” (probably the only thing I can correlate between the two, actually). For some reason, I never actually got around to watching this one in the past. While, I can understand the appeal of the Garfield animated series, it just never really did anything for me. Additionally, I watched A Garfield Christmas last year and it just didn’t do anything for me – the humor was sadly pretty milquetoast and the casual nature of the program as a whole left much to be desired. It seems to be almost universally beloved by most I know, though, so I’m willing to give it a second chance later this year.

Actually, one other way that this conveniently connects to the wacky special up above is that this also outlines a day of trick-or-treating! This has proven to be a pretty common theme in these specials (for obvious reason). Here, Garfield embarks on the activity with Odie, both dressed as pirates; in typical greedy Garfield fashion, he intends on taking all of the candy for himself. There are a few minor scenes in the first act between Garfield and Jon that take on a casual pace and are framed much like the comic strip. The humor is simple, wholesome, and kid-friendly basically all the way through. And as predicted, there are also a few musical numbers, none of which are very good – though, I think that’s beside the point. 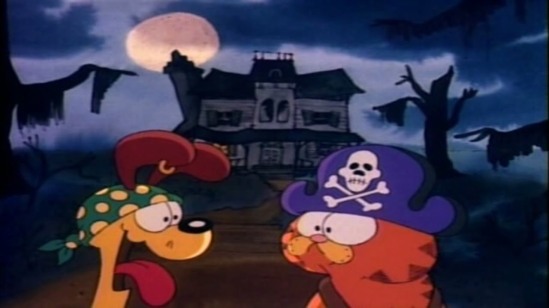 Minor antics ensue during Garfield’s (and Odie’s) Halloween adventure – pretty standard stuff. That is, until the duo embark upon a scary-looking house, which they believe is deserted… until they come upon a truly frightening-looking old man sitting in an armchair! The special never tries to hard with any outright grotesque imagery, but just the sheer look of this guy is enough to give any small child nightmares – his first appearance even made my skin crawl a bit. And just like that, this becomes a ghost story – a pirate ghost story specifically, as it turns out this house is set to be haunted by ghosts this very same night! I won’t give away too much of what happens here, but we do see the ghosts and their designs are probably a bit too creepy to expect from a Garfield cartoon. Nonetheless, their presence here add some much-needed tension to the whole tale and the dark turn of the special in general fits the mood progression surprisingly well.

Nevertheless, let’s just say that both of our main characters turn out okay in the end. Did you expect a tragic ending to a Garfield episode?? Anyway, this special certainly had more twists and turns than I was ever expecting – and my expectations weren’t the highest at all! This is probably the most I’ve enjoyed myself watching anything Garfield-related, and while much of that is due to my love for Halloween, I think Jim Davis’s writing and the crafty animation deserves a bulk of the praise as well. Additionally, it’s just kind of fun listening to Lorenzo Music doing a pirate impersonation while also performing as the voice of Garfield. This is generally much more well-done than A Garfield Christmas and I can’t wait to add this to my annual lineup in the future!