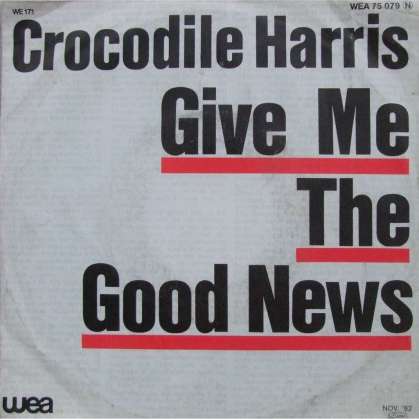 “Give Me the Good News” is the first single of my Random Single challenge from the country of South Africa, but the second I’ve gotten from the continent as a whole (the first coming from Nairobi-born musician Roger Whittaker). My first impression of Crocodile Harris is that his name sounds very close to Australian musician Rolf Harris’ name (it even sounds more Australian!), whose classic song “Tie Me Kangaroo Down, Sport” I absolutely adore. As it stands, though, Crocodile Harris’ single is a lot more sillier than I was anticipating from someone named Crocodile Harris. It’s actually a more poignant anti-war piano ballad, with sentimental lyrics and a melody that moves at a pretty slow, heart-tugging pace.

It is this piano melody that I think makes for one of the strongest elements of the whole songs. It twinkles at the very start to catch the listener’s ear, continuing to use just the right arrangement of chords to achieve a pretty and touching quality throughout the whole track. The chorus is swelling and anthemic and I quickly found myself singing along after only the very first or second listen. It’s really easy to see how this song spent eight weeks in the Springbok Top 20 (the South African equivalent of Billboard) – it is both sad for the state of the world today, yet hopeful for the future in which people may change and things may actually turn out better than expected. Considering that nothing feels good anymore at this eve of this new presidency, I can’t help but feel a bit of empathy for the sentiment carried on in here.

In terms of its theme, it feels a lot like “We Are the World”, even if it was recorded a full three years prior to the American single. At times it does feel a bit on the nose, but Harris sings the whole tune wonderfully and convincingly throughout, with a couple lines here and there standing out as particularly good. I’m partial to the couplet, “You can’t use guns to build a nation / A bullet never was creation”. Nonetheless, also like “We Are the World”, I feel like I would just lose my mind if I had to listen to this song on high rotation everyday for eight weeks. It’s affecting during the first couple of listens, but each subsequent play only further chisels away at the gorgeous shell to reveal a totally schmaltzy core. Still, I can’t say I completely disagree with a piece that essentially condemns the idea of war being a useful strategy at all.

Like Loading...
This entry was posted in Uncategorized and tagged 1980's, 1982, Crocodile Harris, One Random Single a Day, South African. Bookmark the permalink.